The brand new Bitcoin Compass app claims to be an award-winning trading app which can supposedly trade Bitcoin profitably on your behalf & see you earning thousands of dollars every day without actually having to do anything. 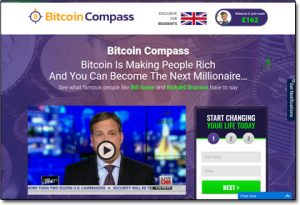 You’re basically led to believe that all you need to do is simply sign up, make a deposit, activate the app & then start profiting… And many of the websites promoting it even claim that it’s been featured on the popular TV show Dragons’ Den.

But has it really? And is it actually legit? Or is the Bitcoin Compass app a scam that you should just avoid?

Well, I’m really glad that you came here to this Bitcoin Compass review before you went ahead & signed up to it because I can immediately tell you that it hasn’t been featured on Dragons’ Den & that it doesn’t really work as it claims.

What Exactly Is The Bitcoin Compass App?

So the Bitcoin Compass app is basically an automated trading app – at least that’s what it claims to be anyway – and you’re led to believe that it can generate you millions by trading Bitcoin entirely on your behalf.

You’re told on the website which promotes the app that all you need to do is simply sign up, make a small deposit with the broker that they recommend & then activate the app in order to begin making money.

And the website claims that Bitcoin Compass members allegedly make a minimum profit of $1,300 per day (as shown below):

I mean if this thing really worked then why on earth isn’t everybody using it? Why are people still working at jobs that they dislike if they could simply just activate the Bitcoin Compass app & earn more money without actually having to do anything?

The answer is because as you likely already suspect it simply doesn’t work as promised.

In fact, the Bitcoin Compass app is nothing but a scam & rather than being set out to help you make money like it claims to be, in reality, it’s just set out to take money from you instead.

The reason I can say that so confidently is because I’ve actually seen this exact same scam launched under several different names such as Immediate Edge, Bitcoin Revolution, Bitcoin Trader & Bitcoin Future.

The person behind the whole thing simply keeps on changing the name of the website in an attempt to escape the negative reviews that expose the truth so that he (or she) can continue tricking people into signing up to it.

But you don’t just have to take my word for that – instead, keep on reading & I’ll show you exactly how it all really works below so that you can see first-hand for yourself what’s actually going on (and why it doesn’t work)…

How Does Bitcoin Compass Work?

So as I mentioned in the previous section of this review the “idea” is that you simply sign up to the Bitcoin Compass website, make a small deposit with the broker that they recommend to you & then activate the app in order to have it begin making profitable trades on your behalf.

But the problem is that the whole thing’s a big con as there are 2 VERY important things the Bitcoin Compass website fails to mention.

Those things are that:

And the reason this is bad news is that this in itself literally proves it’s a scam.

You see binary options brokers work differently to normal brokers. Through a binary options broker you don’t “invest” in anything, you simply place bets as to whether you think the value of something will go up or down over a set time period (usually under 60 seconds).

If you guess right then you get your money back plus a small bonus, but if you guess wrong then the broker takes everything you bet.

And here’s the important part – if you win, the broker has to pay you the winnings out of their own pocket… Meaning it’s in their best interests for you to LOSE… They absolutely do not want you to win.

So with that in mind ask yourself this – why on earth would a binary options broker (who only earns money when you lose money) pay commissions to the creator of a system which is supposed to guarantee you profits?

The answer is they wouldn’t – and the real reason they’re paying the creator of the Bitcoin Compass system commissions is because they know that in reality the system is designed to make you lose.

The broker & the creator of the Bitcoin Compass system are both in cahoots.

And The Scam Only Starts With The Deposit…

The scam is actually much more cunning than that.

You see rather than just leave you to find out it doesn’t really work as promised after you deposit, the creator of the Bitcoin Compass app has actually created a fake trading app which is designed to make you think that you’re actually winning.

So after signing up to Bitcoin Compass & depositing with the broker, you will indeed get access to the trading app as promised… And it will indeed to be working exactly as promised. It’ll look like you’re getting rich.

The problem though is that the app isn’t really connected to any live markets. It’s nothing more than a mere video game & all of the profits shown inside of it are faked in an attempt to get you to make even more deposits.

The broker will claim that the more you deposit, the bigger you’ll be able to profit – because they’re in on the scam too.

You’ll only be left to finally discover that the whole thing has been a scam when you go to make a withdrawal & realize it never actually gets processed. The broker will either ignore it, make excuses, or they will potentially ask you for even more money to “release it” which is just an even further part of the scam.

Basically any money you deposit via the Bitcoin Compass app & associated broker will be gone for good.

So Why Was It Featured On Dragons’ Den?

One of the reasons so many people have been caught out by this scam system is because the people behind it have created many fake news websites which lead people towards believing that the system has been featured on Dragons’ Den.

However, the truth is that the system has NOT been featured on the popular TV show – and in fact, the Dragons’ have actually publicly announced that they do not endorse the system whatsoever (as shown below): 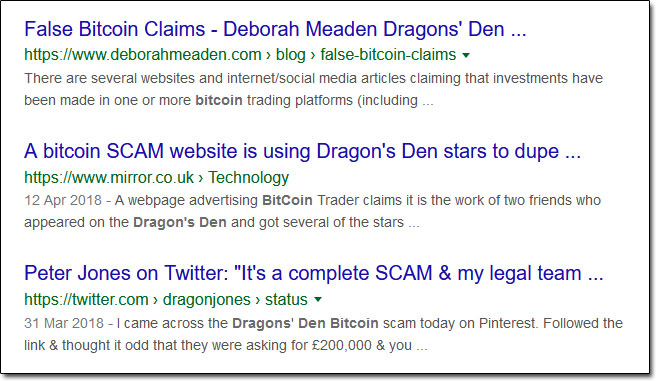 It’s the same story with Bill Gates & Richard Branson too… Those 2 guys DO indeed endorse Bitcoin (and other cryptocurrencies), however, they do not endorse the Bitcoin Compass system itself.

The creators of Bitcoin Compass have simply pulled news clips in which Bill Gates & Richard Branson were talking about cryptocurrencies in general & they have sliced them together in an attempt to trick people into thinking that they’re talking specifically about the Bitcoin Compass app (which they’re not).

And the trend carries on with the testimonials, because as shown below the photos of the so-called “members” who seemingly praise the system have just been pulled from random stock-image websites:

My Verdict – Is Bitcoin Compass a Scam?

Yes, the Bitcoin Compass app is definitely a scam. The whole thing is just a ploy to trick you into depositing with an unlicensed binary options broker so that the person behind it can earn some commissions at your expense.

After depositing (which I don’t recommend doing) the app will appear to be generating you profits but the profits are fake – it’s basically just a video game & it’s all a con to trick you into depositing even more.

You’ll only be left to discover that the whole thing is a phoney when you finally try to make a withdrawal & realize that the broker (who is also in on the scam) fails to process it & keeps your money.

And like I said at the start of this review, I’ve actually already exposed this same scam several times before when it was launched under different names such as Immediate Edge, Bitcoin Revolution, Bitcoin Trader & Bitcoin Future.

The Bitcoin Compass app should be avoided at all costs & instead if you truly want to legitimately make money online I suggest you simply stick with one of the proven methods from my top picks page here.

Or alternatively, you can learn about the same way that I personally make most of my own money online which is something called affiliate marketing. In my opinion that is the best way to earn online.

The reason I say it’s the best way is because the amount you can earn with it is totally uncapped & thanks to programs like Wealthy Affiliate it’s pretty easy to get started with even if you’re completely new to it.

So if it’s something that you’d like to find out more about or get started with I’d highly recommend you check out Wealthy Affiliate.

Whatever you decide to do though I just sincerely hope that my review of Bitcoin Compass here has given you a good insight into how the program really works & most importantly I hope it’s helped prevent you from losing your cash to it.