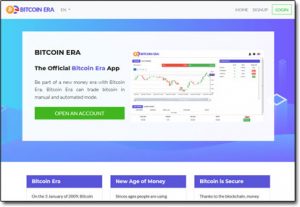 Have you come across the new official Bitcoin Era app? It claims to provide you with a way to become part of the “new Bitcoin era” & promises it can enable you to enjoy profits of thousands of dollars per day through automated trading…

You’re led to believe that all you need to do is sign up, deposit & then activate the app to begin making money.

But is it actually legit? Or is the Bitcoin Era app a scam that’ll just see you losing money instead of making it?

Well, I’m really glad that you came here to this Bitcoin Era review before joining because as you’ll soon see, the whole thing works a lot different to what you’re actually told.

What Is Bitcoin Era?

The Bitcoin Era app is the name of a brand new trading app which has just surfaced online over the past weeks & it makes the extremely bold promise of being able to generate you profits from Bitcoin trading all on complete autopilot.

And if that on its own didn’t sound good enough you’re also told that you can use the system for free. You’re led to believe that you just need to sign up, deposit & then activate the system to begin making money.

But it just sounds a little too good to be true, doesn’t it?

I mean if this new Bitcoin Era app really works as promised then why isn’t everybody using it? If it can really generate people an income on autopilot then why are people still working at jobs they dislike when they could just earn from the app instead?

The answer is because the whole thing is a phoney.

The Bitcoin Era app is nothing but a scam & the reason I can say that so confidently is because I’ve actually already seen this exact same scam several times before launched under multiple different names.

The person (or people) behind the scam simply keep on changing its name in an attempt to escape the negative reviews that expose the truth (like this one) so that they can continue parting people with their hard-earned cash.

And you don’t need to just “take my word for it” when I say it’s a scam, instead keep on reading and I’ll show you exactly how it all really works below…

How Does Bitcoin Era Work?

So you’re led to believe that the Bitcoin Era app will enable you to trade Bitcoin profitably & that it has 2 modes… You either trade manually or you can allegedly switch it to autopilot to have it make the trades on your behalf.

It basically leads you towards believing that it’ll provide you with an automated way to make money from Bitcoin… But that’s NOT how it works.

You see there are a couple of things I couldn’t help but notice which immediately led me towards believing that it may not be legit.

The first thing was the fact that the website displayed no license details whatsoever – and it’s a requirement for an investment/trading related website to not only hold a license but to also displays detail of it.

It’s VERY rare that a legitimate trading or investment website would fail to do this as there are quite serious repercussions if they do.

The other thing that led me towards believing it may not be legit though was the fact that there was literally NO information whatsoever provided with regards as to who’s actually behind the whole thing.

No names, no addresses – nothing… Which is extremely unusual (in fact unheard of) for a legitimate investment/trading related company.

It comes without saying that you should NEVER invest money via a website that gives no details about itself because you essentially have no idea who you’re handing your money to. You certainly shouldn’t have it over to an unlicensed one (like Bitcoin Era) that provides no details.

The Truth About Bitcoin Era

Basically, the whole Bitcoin Era app thing is a phoney – the website is a phoney, the app is a phoney & everything you’re told by the creators of it is a lie. The whole thing is just a trick to get you a deposit with a binary options broker.

You see there’s one very important thing which the creators of the Bitcoin Era app fail to mention & that’s the fact that they’re actually affiliated with the binary options broker that they force you to deposit with before you can get started.

This means that if you sign up & deposit, they get paid a commission at your expense…

But that alone PROVES its a scam…

The reason it proves it’s a scam is because binary options brokers (which is what you’re told to deposit with) don’t add fees to their trades which means they only actually make money when you lose money.

If you win then it actually costs them money…

So ask yourself this – why on earth would a binary options broker, a broker that only earns money when you lose money pay commissions to the person who had supposedly created a “guaranteed winning system”?

They wouldn’t, no way… The real reason they’re paying the creator commissions is because they know that if you use the Bitcoin Era app you’re actually going to lose money – and you’re going to lose lots of it.

The Hidden Danger With The Bitcoin Era App

The people behind it have a much better idea of getting even more money from you, unfortunately.

You see what they’ve actually done is they’ve created a fake trading system – so after depositing money via the broker that they “recommend” you’ll get access to the trading system & it’ll appear like you’re actually profiting.

Most of the trades the app makes on your behalf will indeed appear to be profitable, but it’s all a con. The app isn’t really connected to any live markets, it’s basically just a video game & it’s been designed to trick you into depositing even more money.

Sadly you’ll only be left to find out its a scam when you finally press for a withdrawal & that’s when you’ll realize that your request either gets ignored, refused – or worse the broker will ask you for money to “release your withdrawal”.

Of course, the last option to pay more money is just a further part of the scam as the broker is in cahoots with the whole thing. They’re basically working together to squeeze you dry of as much money as possible.

Is Bitcoin Era a Scam?

The Bitcoin Era app is definitely a scam – not only does it show all the signs of being a scam but as I mentioned throughout this review I have actually seen this exact same scam several times before under different names.

The whole thing makes out like it will help you make money however the truth is that it’s not really set out to help you do that. It’s just set out to trick you into depositing with an unlicensed binary options broker so that they can make money at your expense.

What’s worse though is that the system actually displays faked profits to make you think that you’re winning trades in order to trick you into depositing even more money so you could really lose a LOT to this Bitcoin Era app scam.

It, therefore, comes without saying that I will be advising you steer clear of it & instead, if you really want to make good money online I will recommend that you stick with one of these legitimate methods for doing so instead.

I’ll also point out that one of my top recommended methods for making money online (which is also the same way I make most of my own money online) is something called affiliate marketing so you may want to check that out too.

It basically involves you promoting products or services in return for commissions & the best part is that the amount you can earn with it is totally uncapped providing you’re willing to put in the work to make it happen.

If you’d like to learn more about it or get started with it yourself then be sure to check out Commission Academy.

But whatever you decide to do I just sincerely hope that my review of the Bitcoin Era app has given you a good insight into how it really works & most importantly I hope it has helped you to avoid it.

If you have any further questions or comments about it then, of course, don’t hesitate to leave them below. 🙂