Crypto Nation Pro is a newly launched trading system that promises to provide its visitors with a way to allegedly be able to make as much as $800 per day from what they refer to as a “massive cryptocurrency surge”. 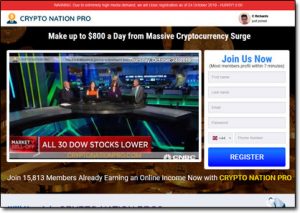 You’re led to believe that you can simply join, deposit & profit… And they even claim that on average members supposedly make their first profits within just a mere 7 minutes of getting started.

But there’s one pressing question.

Is it actually legit? Or is Crypto Nation Pro a scam that’ll just somehow end up parting you with your cash instead of actually helping you to make it?

Well, what I’ll say right from the off is that you’ll be glad you came here to Crypto Nation Pro review before signing up or depositing because as you’ll soon see it’s certainly NOT what it seems.

What Is Crypto Nation Pro?

Crypto Nation Pro is the name of a newly launched auto-trading system which claims it has the ability to generate guaranteed profits by trading cryptocurrencies such as Bitcoin on your behalf.

According to the website itself, it claims to have an incredibly high accuracy rate of 99.8% & also states that it has been featured in several high-profile publications such as Forbes, CNN & Time magazine.

On top of that it even claims to have been awarded the title of “#1 app” as shown below:

But is any of this really true? Can you really just sign up, deposit & make money like you’re led to believe?

And if you can then why isn’t everybody doing this? Why are people still working at jobs they dislike if they can simply sign up to Crypto Nation Pro & earn more money without actually having to do anything?

Well, the simple answer is because it doesn’t work as promised… The whole thing is actually nothing but a get-rich-quick scam & I can say that so confidently because I’ve actually seen this exact same scam several times before.

The creator of it just keeps launching it under different names in an attempt to escape the negative reviews that surface so that he (or she) can continue tricking people into signing up & earning at their expense.

Some of its previous names include Bitcoin Future, Crypto Revolt & Bitcoin Evolution…

How Does Crypto Nation Pro Work?

Essentially the whole Crypto Nation Pro website leads you towards believing that by landing on the website you’ve discovered an automated way to make lots of money & it claims that you need to “act fast” if you wish to secure your spot.

As you can see below at the time of writing this review (24th October 2019) there is a warning message displaying on the Crypto Nation Pro claiming that the registrations will close at the end of the day:

However I actually visited the website yesterday & it said the exact same thing, only the date was listed as the 23rd of October. This is basically what’s known as a false scarcity tactic & it’s a huge red-flag of a scam.

The creators put that message up to make you think that you need to rush into signing up & they want to rush you through the process so that you don’t discover Crypto Nation Pro reviews (like this one) and find out the truth.

It’s likely that right now at the time of reading this review the message is still there but once again with a different date. That proves it’s 100% fake.

And the mention of being named “#1 app” and being featured in publications like Forbes is also fake. The reason I can say that so confidently is because the Crypto Nation Pro system is what’s known as a binary options trading system & Forbes have publicly warned against the dangers of these many times, as shown below:

There is simply no way that Forbes would ever endorse such a system like Crypto Nation Pro because they’re built with 1 intention and 1 intention only which is to make you lose money so that the creators can earn at your expense.

You see this is the process in theory…

But what the creators of the systems fail to tell you is that they’re affiliated with the brokers that they’re “recommending” which means that when you sign up & make a deposit with them, they get paid a big fat commission at your expense.

So in reality the whole thing is just a ploy to trick you into depositing with an unregulated binary options broker – the exact same types of brokers that Forbes warned so strongly against getting involved with.

And you might just be thinking that from here you’ll simply be left to discover that after handing over your cash the system doesn’t really work as promised but sadly the scam is actually MUCH more cunning than that.

I mean yes, the system doesn’t work – but the people behind the Crypto Nation Pro scam have actually created a fake system that is designed to make you believe that it’s actually working and that you’re actually profiting.

So after depositing you’ll think “wow, it really works”… But unfortunately, the system isn’t actually connected to any live markets – it’s just a video game & it’s designed to trick you into depositing even more money. They just want to squeeze as much cash from you as they can.

You’ll only be left to discover that it’s actually all a scam when you finally push for a withdrawal & realize it never gets processed. The broker will either ignore it or point blank refuse it, because they’re in on the scam too.

Sometimes the brokers will even claim that you need to PAY more money to “release your withdrawal” but again this is just an even further part of the scam.

It’s all very cunning & it’s easy to see why people get caught out of them, but hopefully after reading my review here you can now see through it & realize that the whole thing is indeed just all a phoney.

And just in case you can’t, let me tell you the one thing that 100% proves it’s a scam…

The Proof It Doesn’t Work As Promised

Remember I mentioned a little bit above that the broker you’re recommended to is what’s known as a binary options broker? And remember the fact that I mentioned the creator of Crypto Nation Pro is getting paid commissions by this broker for referring you?

Well here’s the deal – binary options brokers don’t add fees to their trades. This means that they only make money when you LOSE money, so it’s in their interests for you to lose your money. If you win, they lose money… And they don’t like that.

So ask yourself this – why on earth would a binary options broker (that only makes money when you lose money) pay commissions to the founder of a system which can supposedly guarantee 99.8% profitable trades?

They wouldn’t, no way! It would put them straight out of business…

The real reason that they’re paying the person behind the system commissions is because they’re in on the scam too & they know that the system has really been designed to make you lose, not win.

Is Crypto Nation Pro a Scam?

Crypto Nation Pro is definitely a scam, there’s no doubt about that. The whole thing is a phoney & it’s simply been designed to trick you into depositing with an unregulated binary options broker so that the person behind it can earn at your expense.

The trading system itself isn’t really connected to any live markets & the “profits” that are generated are just fake. It’s basically like a video game & it’s just designed to keep making you deposit more & more so that they can continue earning from you.

You’ll only be left to discover the hard way that it’s all been a scam when you finally try to make a withdrawal but by then it will be too late, you’ll have already lost your money & potentially tens of thousands of it.

The truth is that yes the internet does provide many legitimate ways to make money however what you have to understand is that none of them are going to ever see you getting rich with little to no work. That’s just a pipe dream.

The internet is great but it’s not magical. In order to make good money online, you must be prepared to put in some work to make it happen… But the good news is that if you are prepared to do that then there are legitimate places you can get started, such as Commission Academy.

It’s at Commission Academy that you’ll learn about something called affiliate marketing which is, in my opinion, one of the best ways to make a full-time income online & it’s actually the same way I personally make most of my own money online.

There are also these other great alternatives for making money too.

But whatever you decide to do I just sincerely hope that my honest review of Crypto Nation Pro here has given you a good insight into how it all works & hopefully it has helped you to save your money. If you have any further questions or comments then don’t hesitate to leave them below. 🙂