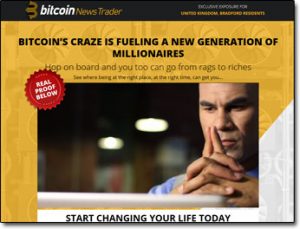 You’re led to believe that you can simply sign up, make a deposit & that the system will then generate you profits entirely on autopilot… But is it actually legit, or is Bitcoin News Trader a scam that’ll just see you losing money rather than making it?

Thankfully you’ve landed in the right place to find out because I’ve taken a closer look into it to see exactly how it all works & in this review I’ll be uncovering everything you need to know, including of course whether or not you can really make any money with it.

What Is Bitcoin News Trader?

The Bitcoin News Trader system is a newly launched Bitcoin trading platform that claims to be able to generate it’s users guaranteed profits entirely on autopilot… Even if they know nothing at all about cryptocurrencies.

But don’t believe a word of it…

I can tell you right from the off that the Bitcoin News Trader is just a scam that’s set out to part you with your hard earned cash & that in reality the only thing this system will really help you do is lose money, not make it.

The reason I can say that so confidently is because I’ve seen this exact same scam several times before. It’s previously been called Bitcoin Millionaire Pro & The Bitcoin Focus Group… The reason it keeps changing it’s name is simply in an attempt to escape the negative reviews & catch more people out.

How Does Bitcoin News Trader Work?

Well the first thing I want to make clear here just in case you jumped straight down to this section of the review is that the Bitcoin News Trader doesn’t work as promised & you will not make any money with it.

All the nonsense about getting high-quality news early & analysing the influence on the markets is totally fake. They just want to trick you into thinking it might be real so that you’ll “try it out” and this is how they’ll get your cash.

Essentially the whole thing is a phony & the reason it’s been created is because the person who’s put it together is affiliated with the broker you’re “recommended” when you try to access the system.

This means that each time some signs up & deposits with the broker that’s “recommended” by the Bitcoin News Trader system, the creator of the system gets paid a big fat commission at their expense.

And guess what happens to the person that made the deposit?

They’re simply left to find out the hard way that the system doesn’t actually work as promised. Instead of making profitable trades like you’re led to believe it will, in reality it’ll make nothing but losses.

And even if you manage to stop it trading before it burns through all of your money you’ll quickly realize that the problem doesn’t end there. Oh no, this is where you’ll find out that the broker is in on the scam too.

You’ll realize that after submitting a withdrawal request because the broker will either ignore it or simply point blank refuse it. The whole thing is literally a massive scam & the guys behind it are just after your cash.

There is no such thing as “trying it out”… That’s the whole scam – you deposit to try it out, they keep your money… Simple as that. Like I say the whole thing’s just a ploy to trick you into doing exactly that.

All companies operating within the investment industry MUST have a license & they must display both the details of their license & company (including it’s registered office address) prominently on their website.

If they choose to keep this information hidden then guess what? It’s likely a scam.

And surprise surprise the Bitcoin News Trader does not display any of this information, which means you have absolutely no idea who runs the show… So would you really want to invest money with a company that could literally disappear without trace at any moment in time? I’d sure hope not.

Is Bitcoin News Trader a Scam?

Yes it is, I can say with 100% certainty that the Bitcoin News Trader is a scam. If you happen to deposit any money into this system then you’ll simply be left to find out the hard way that it doesn’t work as promised… By that point though it’ll be too late because the broker will just ignore or refuse any withdrawal requests & prevent you from getting your money back.

The reality here is that the Bitcoin News Trader system has been setup purely to make it’s creator (and the broker) wealthy at the expense of those who are buying into the system to “try it out”.

The whole thing is literally just a massive ploy to part you with your cash, but sadly with the hype surrounding Bitcoin at the moment it’s likely that a lot of people will end up getting caught out by it.

The truth is that whilst the internet does indeed provide a whole load of awesome ways to make extra money, it’s not magical & it’s not going to see you getting wealthy with little to no work like the Bitcoin News Trader promises… If it could do that, then everybody would be doing it & the world would likely end up in crisis with everyone quitting their jobs…

If you really want to make good money online then you must be prepared to put in some work to make it happen – there’s no 2 ways about it. The good news though is that if you are prepared to put in the work then there are legitimate programs out there like Commission Academy that will show you exactly what you need to do to get started.

But overall there is simply no way I will be recommending the Bitcoin News Trader system to you because as far as I’m concerned it’s nothing but bad news. I just hope you came to this review first before depositing & that it helped you save some cash.

If you do happen to have any further questions or comments about it though then don’t hesitate to leave them below & I’ll get back to you as soon as I can.