The brand new Cash At Home Bonanza system promises to provide its visitors with access to a “weird trick” that can supposedly enable them to easily earn as much as $300, $400 & even potentially $500 per day. 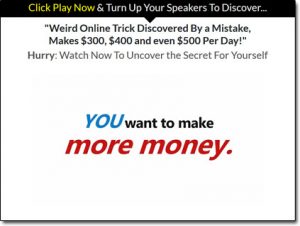 But is it really legit? Or is Cash At Home Bonanza a scam that’ll just end up costing you more money than you ever actually manage to make?

Thankfully you’ve landed in the right place to find out as I’ve personally taken a closer look into the system myself to see how it all really works & in this honest review I’ll be uncovering the truth as well as outlining whether or not you can really earn anything with it.

What Is Cash At Home Bonanza?

The Cash At Home Bonanza system is a brand new money-making system that’s just been launched on various affiliate networks & it claims to provide its members with a 100% free way to make up to $500 per day, quickly and easily…

On top of that, it also claims to be totally beginner-friendly and the video on the promotional page for the system states that literally anybody can begin making money with it even if they’ve never made so much as a single penny online before…

But I know what you’re probably thinking – it sounds too good to be true, and I totally agree.

So what’s the deal? Is it really legit or is it a scam? Can you make any money with it at all?

Well, I can tell you right from the off that it is indeed a scam. You see, whilst the method it gives you access to in itself is legit (which I’ll explain more about in a moment), the way the Cash At Home Bonanza system sells you into it is just totally misleading.

There is NO way you’re going to make money as easily as you’re told – and the reason I can say that so confidently right from the off is that I’ve previously seen this exact same system before.

Prior to being called the Cash At Home Bonanza system it was actually called the Online Cash Bonanza system & I exposed it right here on this blog. They’ve simply changed their name in an attempt to escape the negative reviews so that the creators can continue conning people out of their hard-earned cash.

You don’t have to just take my word for that though, instead keep on reading & I’ll show you exactly how it all really works below…

How Does Cash At Home Bonanza Work?

So as you likely already know after watching the video on the Cash At Home Bonanza website, the whole thing spends a lot of time on getting you “hyped up” about the potential opportunity of earning lots of easy money… However, it fails to explain in any sort of great detail anything about what you’ll actually be doing in order to make that money.

It tells you a little bit about “posting links online” for various big-name companies, but other than that it basically pushes you towards handing over your cash in order to find out more… And that’s a typical trait of a get-rich-quick scam.

They promise you the world, get you to hand over your cash & leave you to discover the hard way that the whole thing doesn’t work as promised… Then they make it very difficult for you to get your money back.

And in short, that’s pretty much exactly what the Cash At Home Bonanza system is doing.

They’re essentially making out like you’re going to be getting to some sort of legitimate link posting job, whereby you’ll be posting links online & getting paid money directly in return for every link you post.

In theory, it sounds like a dream, but after handing over your cash to get started you’ll be left to find out that’s NOT how it really works. Instead, you’ll see that there’s no job at all and that all you really get access to is some training.

The training you get access to briefly teaches you about something called affiliate marketing – and here’s the deal, affiliate marketing in itself is a legitimate (and VERY good) way to make money online… However, the training provided to you via the Cash At Home Bonanza is so rubbish that it’ll just leave you feeling confused rather than actually helping you profit.

If you really want to make good money with affiliate marketing then you need the help of a legitimate program like Commission Academy.

But anyway, “what is affiliate marketing?” I hear you ask…

Well in short affiliate marketing is basically where you promote products or services for 3rd party companies online in return for commissions. So as an example you could sign up as an affiliate of Amazon & promote any of the products found on their website with the ability to earn commissions on any sales you generate.

You just get a unique link to the products which you can promote on the web, so if somebody clicks through your link & buys something – you get paid.

Here’s a visual to give you a better understanding:

It’s actually a pretty simple way to make good money online & like I say, with the help of a legitimate training program like Commission Academy you could quite easily find massive success with it.

But systems like the Cash At Home Bonanza system are never going to help you because all the creators of those hyped-up systems care about is making themselves wealthy at your expense.

That’s why after handing over your money they just give you some BS training… They don’t really care about your success at all, and that brings me nicely onto…

Is Cash At Home Bonanza a Scam?

Yup, as far as I’m concerned the Cash At Home Bonanza system is definitely a scam. I mean don’t get me wrong you do get access to some training in return for your money but it’s quite clear that the whole thing has been set up purely to make its creator rich rather than actually helping the members profit & so therefore, in my opinion, it is just a scam.

The whole thing has been built on lies & deceit just to try & trick you into handing over your cash to get started so that the creator can earn some money at your expense… And then all you get in return for your money is some totally rubbish training on affiliate marketing which basically just explains what it is rather than explaining how you can actually get started with.

So overall it’s safe to say that I am not going to be recommending this system to you because I know it’s not going to help you make money. Instead, if you really want to learn how to make money then check out the program that took me from $0 to $10k+ per month online here. That’s the best place to get started.

Or alternatively, check out any of these additional legit ways to make money online here.

But either way whatever you decide to do I just hope that my review here has given you a good insight into how this program really works & hopefully now you can see why you need to avoid it. If you happen to have any further questions or comments though then don’t hesitate to leave them below & I’ll get back to you as soon as I can.