The Click Money System is a brand new system that promises to provide you with a way to make lots of easy money through online trading all on complete autopilot & it’s allegedly been put together by 2 London based trading experts named Julia & Harold. 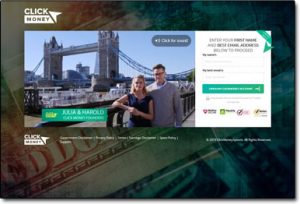 You’re led to believe that as the name suggests you can literally just sign up, “click” and make money.

But is it actually legit? Or is Click Money a scam that’ll just end up parting you with your own hard-earned cash instead?

Well, you’ll be glad that you came to this Click Money System review before you signed up because as you’ll soon see the whole thing does NOT work as it claims.

The Click Money system portrays itself as being a “done-for-you” system for making good money online through automated trading. The so-called founders Julia & Harold claim that you literally just need to “click” & that their system will begin making money for you…

But I know what you’re probably thinking… What’s the catch?

I mean come on, if this system really works then why isn’t everybody using it? Why are people still working at jobs they dislike if they can just plug themselves into an automated system & make thousands per day without having to do anything?

Well, the answer is because the whole thing is actually just a scam. Yep, the Click Money System isn’t real – it’s just a binary options trading scam & it’s set out with the sole intention of parting you with your hard-earned cash.

The reason I can say that so confidently right from the off is because I’ve already exposed literally hundreds of these scams before. Some of the previous ones include the likes of the Bitcoin Trader App, the Brit Formula & the Bitcoin Miner App.

The people behind them simply keep on changing the names in an attempt to escape the negative reviews that surface & out them as scams so that they can continue parting people with their hard-earned cash.

You don’t have to just take my word for it though – instead, keep on reading & I’ll show you exactly how it all really works below…

So the concept (as Julia & Harold claim) is that you’ll simply be able to sign up, deposit some money with their “recommended” broker & then activate the system for it to begin generating you an automated income all by itself…

From there you’re then led to believe that you won’t need to do anything extra other than check the system is still activated every now & then… They claim that with just a “click” you’ll begin receiving tons of cash every single day as shown below in the screenshot taken from their website:

However, that couldn’t be further from the truth. In reality, the whole thing is actually just a ploy which has been designed to trick you into depositing with an unregulated binary options broker that the REAL creators of the Click Money System are affiliated with.

You see when you make a deposit with the brokers, the brokers pay a commission to the creators of the Click Money System because they’re both in cahoots… And the “real” creators aren’t Julia & Harold at all, those are just actors.

However, the scam is actually MUCH more cunning than that.

You see, the guys behind it could indeed just leave you to find out it doesn’t really work as promised and take your cash… But they’ve gone one step further.

Instead of doing that they’ve actually set it up so that it fakes your profits & pretends that you’re winning so that you’ll continue to deposit even more & more money… Until you eventually try to withdraw & realize the whole thing is just a con.

And the broker won’t be interested in helping you out because like I mentioned above they’re unlicensed, which means they’re unregulated, which basically means they’re just scammers out to take your cash.

The whole operation is just a big fraud & it should be absolutely avoided at all costs.

Even Forbes themselves warned against the dangers of binary options trading as shown below:

The Click Money System is definitely a scam, I can say that with 100% confidence. I’ve exposed literally hundreds of these binary options scams over the years & I know exactly how they work… They are pure BS.

The whole thing as I’ve mentioned throughout this review is just a ploy to trick you into depositing with an unregulated binary options broker so that the creator can earn a commission at your expense.

The telltale sign that proves its a scam is the fact that binary options brokers only make money when you lose money, so it simply wouldn’t make sense for them to be paying commissions to the creator of a system that could actually guarantee you profits… It’d put them out of business.

And as you can also likely imagine there is simply no way a system could ever guarantee profits. Sadly the world doesn’t work like that – if you want to make good money then you must be prepared to put in the work to make it happen, there are no shortcuts.

The good news though is that if you are prepared to put in some work then there are plenty of legitimate things you can do online to make money such as affiliate marketing for example which is the same way I make most of my own money online.

You can also get started with (and learn more about) affiliate marketing for free over at Commission Academy.

And alongside that, there are many other ways to make good money online as well… But whatever you decide to do I just sincerely hope that my review of the Click Money System here has helped you save some of your cash.

35 thoughts on “Click Money Review – Is It Legit? I Put Julia & Harold’s Claims To The Test”