The Brit Formula system has supposedly been created by a guy named Harry Jones & it promises to provide you with a guaranteed way to make automated profits through online trading, even if you’re totally brand new. 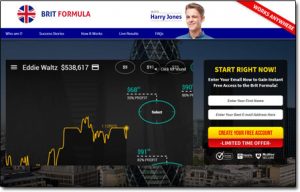 Harry leads his visitors to believe that all they need to do is simply sign up, make a small deposit & activate the system in order to begin making automated profits of over $1,000 per day…

But could it really be true? Could you really make so much money so easily?

Or is the Brit Formula a scam that’ll just end up parting you with your cash instead & making Harry richer at your expense?

Well, you’ll be glad that you came to this Brit Formula review first before putting any money into the Brit Formula system because what I can tell you right from the off is that the whole thing is NOT what it seems.

What Is Brit Formula?

The Brit Formula is a trading system that has allegedly been created by a guy named Harry Jones & you’re led to believe that it can enable you to make $1,000’s per day online by making automated profitable trades on your behalf.

Harry claims that you don’t need any experience & that you can just simply sign up, make a small deposit ($250+) with his recommended broker & then activate the system to begin making money almost instantly.

He says that the system has been based on the exact formula that he has personally used to make millions of dollars & he even boasts a “Profit Guarantee” through which he states you are supposedly 100% guaranteed to make money.

But there’s one problem, which is that it sounds WAY too good to be true… And that’s because it is!

The reason I can say that so confidently right from the off is that the Brit Formula is actually just a re-hashed version of a scam that I previously exposed on this blog which was called the Brit Method (which also then renamed to the Britcoin System).

The creator of the scam simply keeps on changing the names in an attempt to escape the negative reviews that surface so that he can continue tricking people into signing up & earning himself money at their expense.

You don’t have to just take my word for that though – instead, keep on reading & I’ll show you exactly how it all really works below…

How Does Brit Formula Work?

Well, the “concept” is that the system has been built on a proven formula for accurately predicting the direction of trades so you can just deposit, run the system & let it generate profits for you on complete autopilot…

However in reality that’s far from how it works.

Instead, the whole thing is actually just a ploy to trick you into depositing with an unregulated binary options broker that the creator is affiliated with so that he can earn himself a handsome commission at your expense.

And whilst you’re made to feel like you can simply withdraw your money back out if it turns out not to work as promised, that also ain’t gonna happen either because the brokers themselves are in cahoots with the scam too.

But if you’re thinking that after you hand over your cash you’ll just be left to find out that it doesn’t really work as promised then think again… Instead the creators of it are actually a LOT more cunning than that.

You see instead of letting you just find out it doesn’t really work, they’ve actually created a fake stand-alone system that makes it seem like you’re actually winning in order to trick you into then depositing even more cash.

The problem though is that the system isn’t actually connected to any real markets… It’s essentially just a video game & you’ll be left to find that out the hard way when you try to make a withdrawal.

The broker will either ignore your request or simply point blank refuse it. Either way they’ll make it next to impossible for you to get any of your money back because the whole thing is just a very clever scam.

The Red-Flags That Prove It’s Not Real

Then there’s the second one, which is the fact that the whole thing revolves around binary options trading… And binary options brokers only make their money when people LOSE money. If you win they actually lose money themselves, so why on earth would they pay commissions to the creator of a system who could supposedly guarantee your profits? It wouldn’t happen – it would put them out of business.

The brokers therefore clearly know that by using the system you are going to LOSE money, not make it… That’s the real reason that they’re in cahoots with the creator of the whole thing. They’re in on the scam too.

Thirdly there’s the fact that the website gives away no contact details, office address or license information whatsoever… And after checking with the regulatory registers I discovered that the Brit Formula system doesn’t actually hold a license which is a requirement by law for any investment-related site.

You should NEVER invest via an unlicensed site regardless as to how good the opportunity may “appear”.

And finally, there’s the fact that Harry Jones the so-called “founder” of the system is actually a phoney. Harry Jones is just a made up name & the photo of him (as shown below) has just been pulled from a stock imagery website:

Is Brit Formula a Scam?

Yes, there’s absolutely no doubt about it – the Brit Formula system is a flat-out scam. It’s just a re-hashed version of a scam that I’ve previously exposed named the Brit Method & the creator has just changed the name in an attempt to catch out more people.

The thing should be avoided at absolutely all costs because it is just designed to take your money. The whole thing is just a ploy to trick you into depositing with an unregulated binary options broker like IQ Option so that the creator can earn some commissions at your expense.

I mean don’t get me wrong, it is indeed possible to make good money online however it is not possible to make lots of money with little to no work being required like the Brit Formula system makes out. Anything promising that is likely just a get-rich-quick scam which will end up taking your cash.

If you truly want to make good money online then one of the best options, in my opinion, is something called affiliate marketing… And that is actually the same way that I personally make most of my own money online.

It basically involves you connecting people with the products or services they’re looking for online & getting paid commissions in return. If you’re willing to work hard at it then it can become very lucrative & you can even do it full-time.

If you want to get started with it or learn more then you can do so over at Commission Academy… Or alternatively you can also check out these other great ways to make money online too.

But whatever you decide to do I just sincerely hope that my honest review of the Brit Formula system here has given you a good insight into how it really works & hopefully you can now see why it should be avoided. Feel free to leave any further questions or comments below if you happen to have any. 🙂