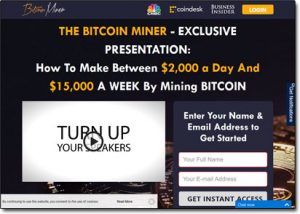 The Bitcoin Miner app has just recently surfaced & it’s allegedly been created by a man named Dan Manson who claims that the software can supposedly enable you to “literally create Bitcoins out of thin air and sell them on for a profit”.

And since at the time of writing this the current Bitcoin price is around $8,000 (or £6,500) that’s a pretty darn bold claim to make… So what’s the truth?

Is it really legit & can it truly enable you to create free Bitcoins? Or is the Bitcoin Miner a scam to avoid?

Well, you’ll be glad that you came to this Bitcoin Miner review first before signing up because I can tell you right from the off is that the Bitcoin Miner is absolutely NOT what it seems.

What Is The Bitcoin Miner?

Basically, the Bitcoin Miner app (which is allegedly the creation of a man named Dan Manson) is supposed to be an app that can mine you Bitcoins on complete autopilot, which basically means it will generate you Bitcoins for free.

You see in case you don’t already know, Bitcoins are a form of cryptocurrency & to get a Bitcoin without buying one you need to “mine” it which basically involves solving a really complex maths problem in order to “release” a coin.

The maths problems are too difficult for humans to conquer so people use powerful machines to crack the problems & generate bitcoins… This is known as mining.

Now originally when Bitcoin first came into existence it was possible for the average person to mine coins themselves… However, the more that get released, the harder the problems get so the more difficult they are to mine.

Nowadays it requires real specialist equipment to mine a coin (and it is very costly to do so because it uses a LOT of electricity)… However, this is where the Bitcoin Miner app comes in, because it claims to have been built using a special strategy to enable you to once again mine coins from your own PC, automatically.

But could it really be true? Could you really mine coins so easily? And if it is true then why isn’t everybody doing it? Why are people buying Bitcoins for really high prices if they can mine them so easily for free?

The answer is NO, sadly it’s not true. The Bitcoin Miner app is actually just a scam & rather than being designed to help you “mine Bitcoins for-profit” like it claims it’s actually just set out to take your cash from you instead.

The reason I can say that so confidently is because I’ve actually seen this scam before back when it was called just BTCMiner, and it also then launched under the different name of Crypto Revolt.

You don’t have to just take my word for it though, keep on reading & I’ll show you exactly what’s really going on below…

How Does The Bitcoin Miner Work?

Well, the concept (as you’re led to believe) is that the Bitcoin Miner app will mine Bitcoins on your behalf using it’s “powerful algorithms” & that you will begin generating around $2,000 per day almost immediately after getting started…

However, the TRUTH is that the Bitcoin Miner app actually has nothing whatsoever to do with Bitcoin mining. The whole thing is actually just a binary options broker scam & it’s based around trading, not mining.

So basically the creator (who as you’ll soon see isn’t really Dan Manson) has set up the Bitcoin Miner app as a “ploy” to trick you into depositing with an unregulated binary options broker that he is affiliated with.

He is basically leading you to believe that his system will provide you with a guaranteed, easy way to make money & that all you need to do is make a deposit in order to get started (so that he can earn a commission at your expense).

He also lulls you into the false sense of security of thinking that you’ll be able to get your money back if it doesn’t turn out to work as promised… But unfortunately, the broker that’s recommended is also in on the scam too.

Now you might expect that after depositing you’ll just be left to find out the hard way that the system just doesn’t actually work as promised, however, in reality, the scam is actually much more cunning than that.

You see the system itself does exist, and it does make it seem like you are actually making money & profiting with Bitcoin… But all of the numbers are faked, it’s not actually connected to any real live markets… It’s basically just a video game.

And the reason it’s faked is that the creator can once again trick you into depositing even more money (since you think you’re making money) so that he can earn some further commissions at your expense once again.

You’ll only be left to find out the hard way that it’s all been a scam once you finally try to request a withdrawal, but by that point, you could have lost thousands, maybe even tens of thousands… So it’s very dangerous indeed.

And Dan Manson Doesn’t Even Exist…

Yep, that’s right, one of the biggest red-flags regarding this system is the fact that the so-called creator who you’re led to believe is named Dan Manson doesn’t even exist… His photo has just been pulled from a stock image website as shown below:

And then there’s the fact that the website displays absolutely no contact details, office address or license information whatsoever… And you should NEVER invest via a financial website that fails to display a license.

The reason I say that is because it’s actually a requirement by law for any investment-related website to own & display details of their license. A genuine website wouldn’t make such a mistake, and just to “double-check” I even looked up the regulatory databases & the Bitcoin Miner system isn’t listed.

But there’s the other obvious red-flag which is the fact that the whole thing simply sounds WAY too good to be true. I mean come on, if this thing really worked then nobody would be left working a job, the world would be in crisis…

I mean yes, it is indeed possible to make good money online but anything promising that you can make good money FAST without having to do any (or much) work is just likely a get-rich-quick scam, because such a thing doesn’t & never will exist.

The good news though is that if you are prepared to put in the work then are programs you can get started with for free like Commission Academy which will show you the exact steps for making real money online (even if you’re totally new).

It’s there that you’ll learn about affiliate marketing which is the same way that I personally make most of my own money online & it is one of my all-time top recommendations for anybody looking to get started.

But back onto the Bitcoin Miner system…

Is The Bitcoin Miner a Scam?

Yes, there’s absolutely no doubt about it, the Bitcoin Miner app is 100% a scam. The whole thing has been built on lies & deceit & it is purely set out to make its own creator wealthy, not you.

The reason I can say that so confidently is because like I mentioned at the start of this review I’ve already seen this scam before under the names BTC Miner & Crypto Revolt & this is just a re-hashed version of it.

Then there’s also the fact that the website lies about its creator (Dan Manson – who doesn’t exist) and it fails to display any real contact details or license details which means that the whole thing is actually operating illegally.

But either way, if you deposit anything via the Bitcoin Miner system you will just end up losing your money so I strongly advise you avoid it & instead if you really want to make good money online just pick something legit from my top picks page instead.

Or alternatively, check out affiliate marketing (which is the same way I personally make most of my own income online). Affiliate marketing is a great way to earn good money online & it’s very easy to get started with.

Plus you can even learn more & get started for free with affiliate marketing over at Wealthy Affiliate.

But whatever you decide to do I just sincerely hope that my honest review of the Bitcoin Miner app here has given you a good insight into how it actually works & hopefully you can now see why it should be avoided. Feel free to leave any further questions or comments below if you happen to have any. 🙂