The Crypto CFD Trader system has allegedly been put together by a guy named Lenny Hyde & it promises to generate you guaranteed, automated profits of over $10,000 per week through online cryptocurrency trading… 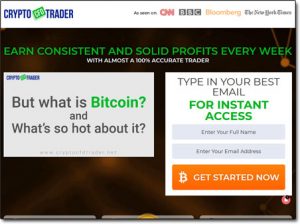 According to its website it’s already made its members combined profits of over $18 million in just 6 months & you’re led to believe that you can now apparently get “free access” – but is it actually legit or is the Crypto CFD Trader a scam that’ll just see you losing money rather than making it?

Thankfully if that’s what you’ve been wondering then you’ve landed in exactly the right place to find out because I’ve taken a closer look into this system & in this review, I’ll be uncovering everything you need to know, including whether or not you can really make any money with it.

What Is Crypto CFD Trader?

The Crypto CFD Trader system is something that claims it can see you generating automated profits from cryptocurrency trading. It even claims that it can help you profit from cryptocurrencies that are actually declining in price too.

You’re led to believe that it’s been put together by a guy named Lenny Hyde who is allegedly an experienced Wall Street investor. He claims he’s built the system around his “proven method” and that you can simply sign up, deposit & start profiting even if you don’t know a thing about cryptocurrencies or trading…

But it all sounds a bit too good to be true right?

And sadly that’s because it is… The Crypto CFD Trader is actually just one of the latest binary options scams & I can tell you right from the off that this system will do nothing other than lose you money.

I don’t expect you to just take my word for that though, instead let me show you how it all works & that way you’ll be able see first hand for yourself just what a big scam this whole thing really is…

How Does Crypto CFD Trader Work?

Well in terms of making you money this system certainly doesn’t work as promised – despite claiming an insane 99.98393% accuracy rate I can almost guarantee that this system will do nothing other than lose you money.

Simple – it’s a big binary options scam. You see a few years ago binary options trading was hugely popular, many people thought that it provided a really easy way to earn lot’s of money online…

Sadly is turned out that despite seeming easy, binary options trading was actually ridiculously hard – so hard that literally nearly every single person who traded ended up going on to lose money.

It got so bad that the regulators of several countries (including the USA) stepped in and banned it entirely. The reason for this was simply because too many people were losing money – binary trading worked in favour of the brokers & people had no real chance at making profits for themselves.

Essentially it was just a way for brokers to sucker people out of their cash.

And take note here – since there are no fees added to binary trades, the brokers only make money when you lose (that’s an important point).

So what did the brokers do to combat this sharp decline in profits?

Simple – they created fake binary options trading systems like the Crypto CFD Trader that can allegedly guarantee their members profits – and not just any profits, easy automated profits…

It’s not the first one I’ve come across either, I’ve seen several others such as the Bitcoin Bonanza & Bitcoin Focus Group scams.

They basically create systems that sound like the perfect dream, being able to make millions of dollars without actually having to do anything… Who wouldn’t want that?

Well sadly the truth is that these systems are actually far from the dream – it’s all just a ploy to get you to deposit with the brokers that are behind them so that they can once again make money at your expense.

For example, here’s the process at the Crypto CFD Trader system:

The problem though is that’s not how it really works. Once you deposit money via any of these binary options scams it’ll be gone for good. You’ll firstly find out that the system doesn’t work as promised, then when you try & request a withdrawal or refund you’ll get refused or ignored by the broker.

These guys are scammers & they’re just set out to take your cash… Don’t fall for it.

The Red-Flags To Look Out For

The Crypto CFD Trader system states it’s been featured in various news publications such as CNN, Bloomberg & even the BBC – none of which is true. This is common across many scams (not just binary options scams) as they’re simply attempting to gain your trust.

They just hope that you don’t actually visit any of the websites to verify their claims – but if you do you’ll find out that they are simply telling lies. Surprise surprise the BBC, Bloomberg & CNN contain no traces of ever having featured the Crypto CFD Trader system.

2. Forced To Deposit With a Specific Broker

If you’re required to deposit via a specific broker then usually you can assume there’s something untoward going on. This is because there’s either a strong likelihood that the broker is behind the system, or that they’re paying commissions to the person that is.

This means 1 of 2 things – either the system is a scam, or the system is not going to work. Remember what I said earlier in this review about brokers only making money when you lose money? There is no way they are going to associate themselves with a system that generates you profits… So if you’re forced to deposit via a specific broker I suggest you run a mile.

When it comes to crypto trading you don’t even need a broker in order to trade, you just a wallet – like a CoinBase wallet for example. Therefore if you come across a system that tries to get you to deposit via a broker, once again I’d suggest you run a mile – it’s likely a binary options scam.

Investment opportunities by law must display both their company contact details (including address) as well their license details – since all investment firms have to be properly regulated. Guess what? The Crypto CFD Trader & many other scams like it display nothing at all… No insight into who’s behind the company & I certainly wouldn’t want to be handing my money over to an anonymous body on the web.

Since these websites are nothing but scams, people are not going to say good things about them – however they still display fake testimonials in order to once again try & gain your trust. You can tell these testimonials are fake because they’re always unverifiable. In the case of the Crypto CFD Trader system the testimonials have allegedly been left on Facebook but if you try & click onto the profiles of the “reviewers” none of the links work, and if you search their names you’ll find they don’t exist.

Is Crypto CFD Trader a Scam?

Yes it is, 100%. The Crypto CFD Trader is just a binary options scam that’s been launched purely to make the creators/brokers behind it wealthy at your expense – it will not help you make any money at all.

Basically to summarize, the whole thing is just a ploy to make you think that you’ll be able to successfully profit – that way you’ll be more likely to deposit (meaning the broker will make money from you). Then, once you’ve deposited you’ll simply be left to find out the hard way that the system doesn’t actually work as promised & that instead of making profitable trades you’ll see it makes nothing but losses.

This is where you might think you’ll still be able to get your money back, but sadly the brokers associated with these kinds of things are unlicensed rogues (AKA scammers) and they’ll either ignore your withdrawal request or simply refuse it altogether. As I say these guys are just lulling you into a completely false sense of security to part you with your cash.

So overall it’s safe to say I won’t be recommending this program to you, instead I’ll be doing the opposite & advising that you avoid it. If you want to make money online legitimately then I suggest you check out a genuine program like Commission Academy instead & avoid all this binary options nonsense altogether because honestly it’s nothing but bad news.

Anyway overall I hope my review gave you the insight you were looking for into this program & most importantly I hope it helped you save your money. If you do happen to have any further comments or questions please don’t hesitate to leave them below.

2 thoughts on “Is Crypto CFD Trader a Scam? My Honest Review Reveals Why It Doesn’t Work!”