In this review, I’m going to be taking a closer look at the Crypto Wealth system which is something that’s supposedly been created by a guy named Max Carney who claims it can guarantee you daily profits of thousands of dollars through automated cryptocurrency trades. 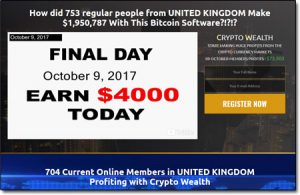 And according to their website 9 out of 10 experts apparently, claim that it’s “the safest profit-generating software of our time” – but is it actually legit?

Or is Crypto Wealth a scam that’s out to part us with our cash?

Well, thankfully you’ve landed in the right place to find out as I’ve personally taken a closer look into it & in this honest Crypto Wealth review I’ll be uncovering everything you need to know.

What Is Crypto Wealth?

The video found on the website of the Crypto Wealth system makes out as if that as a member of the system you’ll be making money through tactical cryptocurrency investments, but this isn’t the case.

It’s actually a binary options trading platform, meaning you won’t be investing in cryptocurrency at all – you’ll simply be placing bets on whether or not you think the value of particular cryptocurrencies will go up or down during a set time frame.

Or should I say the Crypto Wealth system will be making these bets for you because according to Max Carney (the alleged founder) it’s supposedly been built using an algorithm that can guarantee profitable trades.

Apparently, you can simply sign up, deposit funds, hit “start trading” and start making thousands of dollars per day without having to do anything – but this is something we’ve heard plenty of times before.

Over the years I’ve seen hundreds of these so-called automated binary options systems launch & not a single one of them has delivered on their promises. They’ve all turned out to be nothing but scams.

And since I saw our guy Max Carney launch another system named the Bitcoin Wealth system (which turned out to be a scam and looks almost identical to the Crypto Wealth system) I don’t have high hopes for this one either.

How Does Crypto Wealth Work?

As I mentioned above don’t be fooled into thinking that you’ll be making any sort of cryptocurrency investments through the system because despite it making out that you will, in reality, you won’t.

The system is a binary options system & binary trading is far riskier than making investments because ultimately you have the same chance of making money as you do guessing the outcome of a coin flip.

The biggest problem with binary options is that because you’re betting on the direction of a commodity or currency value it makes you feel like you can predict the outcome, but because of the such short time-spans that these bets are made over it’s next to impossible to predict the outcome with any real accuracy.

That’s why even Forbes published an article warning people about the dangers of binary options:

Anyway, the guy behind the Crypto Wealth system Max Carney claims that he’s managed to develop an algorithm that can actually use artificial intelligence to determine profitable trades with accuracy.

But this was the same BS he said about the Bitcoin Wealth system.

You’re supposed to be able to just sign up, deposit with the recommended broker, hit “start trading” & begin making money…

Surprise surprise after getting inside the Crypto Wealth system it turns out it’s exactly the same as the Bitcoin Wealth system which was also created by Max Carney & turned out to be a massive scam.

Basically, Max, the guy behind this system (or should I say the alias used to cover up the real people behind the system) has affiliated himself with a binary options broker company.

This means that if he gets people to sign up with the broker & deposit funds, they’ll pay him a big commission.

So just like we seen with his other system, the Bitcoin Wealth system, this Crypto Wealth system is also nothing but a ploy to get you to sign up & deposit funds with the broker that he “recommends” to you.

And then after you make the deposit you’ll get access to the “profitable” system but that’s when you’ll be left to find out the hard way that it doesn’t actually work as promised.

Instead of making guaranteed profitable trades, you’ll quickly see the balance of your account start depleting as the system will begin making nothing but losing trades & burning away at your funds.

But by this point, the broker has your money & even if you manage to stop the system before all your money disappears they’ll make it very difficult (in fact nearly impossible) for you to get it back because sadly they’re also in on this with the creators of this system.

Basically, the whole thing is just a ploy to part you with your money.

The reason there are so many of these binary options scams is that unfortunately they’re very good at catching people out & they do that by lulling them into a false sense of security.

Basically, they put people in a position where they feel that they can just try it out without any real risk being involved to their money. They make you think that if it doesn’t work as promised you can just withdraw your funds…

But what they don’t tell you is that the broker is in on the whole thing.

Once you deposit those funds & the broker has them they will make it very difficult for you to get them back even if you haven’t traded with the full amount. Chances are they’ll point blank refuse a withdrawal request.

The best thing to do is simply not to give them any of your money in the first place.

Is Crypto Wealth a Scam?

Sadly yes, Crypto Wealth is a scam that’s been designed with the sole intention of parting people with their earned hard cash. The whole system is built upon nothing but lies & false promises.

It’s clear to me that this is no different to any of the other binary options scams that have come before it, it’s just that they’re jumping on the cryptocurrency hype to try & scam even more people.

The whole system is nothing but a ploy to make you think that you’ll be able to profit so that you’ll be more likely to sign up & deposit with their “recommended” broker so that they can earn themselves a commission.

Basically, they’re just out to make money at your expense.

For that reason, the Crypto Wealth system will be getting a huge thumbs down from me & I certainly won’t be recommending it to you because I can see that it’s clearly only set out to part you with your cash.