The Bitcoin Wealth system has supposedly been put together by a guy named Max Carney & he claims that it can generate you thousands of dollars per day by making automated cryptocurrency trades on your behalf. 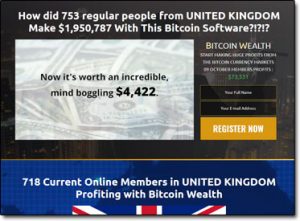 Allegedly, all you need to do is sign up, deposit funds & you can start making money without actually doing anything.

But is it actually legit? Or is Bitcoin Wealth a scam that’s out to part you with your cash?

Well, thankfully you’ve landed in the right place to find out as I’ve personally taken a closer look into it & in this honest Bitcoin Wealth review I’ll be uncovering there is to know.

What Is Bitcoin Wealth?

The Bitcoin Wealth system is one of the latest binary options trading systems to launch that’s jumped onto the hype of cryptocurrency trading & it’s supposedly been created by a guy named Max Carney.

I’ve seen several similar systems launch recently like the Bitcoin Code & the Ethereum Code but they’ve all turned out to be flat-out scams so right from the get-go I don’t really have high hopes for this system.

The video found on the Bitcoin Wealth website talks about the value of the cryptocurrencies & makes out as if you will be profiting from making investments but that’s not the case, it’s actually a binary trading system.

This basically means that rather than purchasing the cryptocurrencies & making money when their value increases, instead, the system will be making bets on whether or not the cryptocurrency will go up or down in value.

This might sound quite easy but be aware that binary options are typically renowned as being extremely high-risk due to the extremely short time frames the binary bets are made over.

Whilst binary options make you feel in control, ultimately you have about the same odds as you do guessing the outcome of a coin toss correctly & that’s why even Forbes themselves advised against them…

However, the Bitcoin Wealth system is claiming that it’s been built on a special algorithm that can detect trends in the cryptocurrency markets & place automated winning trades on your behalf.

Though this mumbo-jumbo isn’t new, we’ve heard it all before with other binary systems like the Dubai Lifestyle App which also turned out to be nothing but a big scam designed to take peoples cash.

How Does Bitcoin Wealth Work?

To be honest the process itself is quite simple, but worryingly it’s identical to the processes that I’ve seen in all the binary scam systems that have came before it which isn’t good news at all.

You’re basically told to sign up for your “free” account, then you’ll be asked to deposit funds with the broker they recommend to you & after that you’re led to believe that all you need to do is hit the “start trading” button & the money will begin to come rolling into your account as the system makes profitable trades on your behalf (allegedly)…

And by the way, the minimum deposit you’ll be required to make is a whopping $250.

After doing some further research into the system I can confirm that as per my initial suspicions the Bitcoin Wealth system is no different to any of the other binary trading scams that have came before it.

This one is just latching onto the cryptocurrency hype in the hope of scamming more people.

Basically, the system hasn’t been created by a trading expert named Max Carney like you’re led to believe – it’s actually been created by a group of internet marketers who are out to make money at your expense.

These internet marketers have affiliated themselves with a binary options broker which means they get paid commissions by the broker for each new member they get to sign up & deposit funds.

Guess what? This broker is the exact same broker you’re forced to sign up with before you can get access to the Bitcoin Wealth system – you know, the one they claim that they “recommend”.

Basically the Bitcoin Wealth system is nothing more than a very clever ploy that’s been designed to trick you into thinking that you’ll be able to easily make profits so that you’ll sign up & deposit with the broker.

Then the creators of this system will get paid a big commission at your expense.

That’s all they’re interested in – after that, they don’t care, and sadly that’s when you’ll be left to find out that the “profitable” system you bought into doesn’t actually work as they promised.

Instead of making money like they claimed you would you’ll just see your account balance quickly depleting.

And if you think you’ll be able to withdraw your funds think again because the brokers are in on it too – they’ll do everything they can to keep your money & they’ll make withdrawing it next to impossible.

Don’t Fall Into The Trap

The reason there’s so many of these binary scams about is because they’re so effective at parting people with their cash because they very cleverly lull people into a false sense of security.

Basically, they make you feel as if you can just try the system out without any great deal of risk – they want you to think that you’ll just be able to deposit funds & withdraw them if it doesn’t work out.

Sadly though this is the part that catches most people out because they don’t realize that the brokers are actually in on it too & that they’ll make getting your money back almost impossible.

So the best thing to do is not give them it in the first place.

Is Bitcoin Wealth a Scam?

Yes, it is a scam – it’s clear to me that this system is built up on nothing but lies & it’s only intention is to part you with your hard-earned cash to make the creators of the system wealthy at your expense.

As I mentioned earlier in this review binary options trading is already risky enough as it is but these scam systems just make it 100x worse & part the most vulnerable, desperate people with the last of their cash.

Whilst the internet provides people with plenty of opportunities to make money sadly it’s not magical & therefore you can’t just make a whole load of money with very little work – the world doesn’t work that way.

The Bitcoin Wealth system is just trying to take advantage of the people who don’t really know much about trading or how money is made online, for that reason I certainly won’t be recommending it.