Have you landed on a webpage promising to provide you with the opportunity to become one of the 100 beta-testers to profit from the newly launched Dubai Profit Now system? 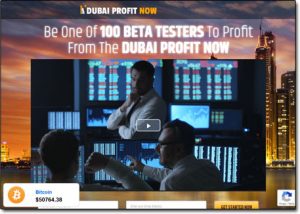 And now, have you found yourself wondering if it’s a scam or a legitimate opportunity?

Well, the good news is that you’ve landed in the right place.

In this honest review, I’m going to be uncovering the truth about the Dubai Profit Now scam & explaining exactly how it all really works… Including whether or not you can actually make any money.

So before you hand over any cash to sign up, be sure to read this review right through to the end.

What Is Dubai Profit Now?

Dubai Profit Now is supposed to be an automated trading app that can make guaranteed profitable trades entirely on your behalf & you’re led to believe that it’s been created by a guy named Scott Hathaway.

Of course, at a glance, that sounds pretty interesting… Especially as Scott claims that the app can see you earning as much as $7,183.80 every single day, all on complete autopilot.

And what makes it even more interesting than that is the fact that Scott also claims that you can get the opportunity to become one of the “100 beta-testers” that’ll be able to try it out for free.

So you’re led to believe that you can simply sign up, deposit & profit…

But is it really that simple? And can you really make money with it?

Well, the short answer is no – it’s not and in actual fact, Dubai Profit Now is just a scam. I’ll explain more about that in a moment (and show you how it really works) but first, let’s take a look at Scott Hathaway himself.

Who Is Scott Hathaway?

Scott Hathaway is the man that you’re led to believe has created the Dubai Profit Now system. He’s the guy that’s supposedly developed a way for you to earn $7,183.80 every single day, all on complete autopilot.

So naturally, you’d expect him to pretty be well known, right?

Well, funnily enough, all that comes up in Google when you search his name is a bunch of results that out him as a “scam” (as shown below):

And what you might also notice from the results shown in the screenshot above is that they all mention something named the Dubai Lifestyle App, NOT the Dubai Profit Now app.

So what the heck is the Dubai Lifestyle App?

Well, basically that is the previous version of the Dubai Profit Now scam. The person behind it has just changed its name so that he (or she) can escape the negative reviews to continue conning more people out of their hard-earned cash.

Literally, the only thing that has changed is the name.

So, Scott Hathaway is a fraud & so is his “system”.

But you might still be wondering, how does it actually work? What’s the scam? So that’s exactly what I’m going to explain in the next section below.

How Does Dubai Profit Now Work?

Basically, the entire “app” is just a trick to get you to sign up with a binary options broker & the creator knows that you’ll be more likely to sign up if he (or she) can make you believe that you’ll be guaranteed to profit.

The problem, however, is that you won’t profit. You’ll lose.

And you place those bets on whether you think the value of something will rise or fall over a certain period of time… But because the time window is so small (usually under 60 seconds), you’re almost always set to lose.

To put it into perspective, you have more chance of coming out with a profit at a roulette table than with a binary broker.

But the creator of the Dubai Profit Now scam doesn’t care about any of that. All he cares about is tricking you into depositing with the broker he (or she) recommends because each time you deposit he (or she) will earn a commission at your expense.

However, things do get even more tricky…

You see, if you were to deposit with the broker as you’re told to do, you would actually get given access to the “app” as promised & surprisingly, you would appear to be generating profits.

So in your mind, it would all appear to be working.

But the problem is that the “app” is not really connected to any live markets. It’s essentially just a video game & it’s simply designed to sucker you into depositing more & more money.

You’ll only be left to find out the hard way when you finally try to make a withdrawal that it’s all been a con & that the “winnings” were not really actual winnings at all.

In the instance of the Dubai Profit Now scam, it definitely is.

And then there’s the fact that the system also has links to a previous scam system named the Dubai Lifestyle App. The Dubai Profit Now system is essentially just version 2 of that exact same scam.

But on top of that, there are also several other red flags too – such as the fact that the Dubai Profit Now scam uses a fake scarcity timer to rush you into making a purchase (as pictured below):

Sure, there are some websites that legitimately do place countdown timers on (such as in the instance of a “real” deal) but when it comes to Dubai Profit Now, the timer resets when you refresh the page.

This means that it’s completely fake & has just been put there to rush you into signing up. The creator knows that if he (or she) doesn’t rush you, you’ll look for reviews & discover that it’s a scam.

Hopefully, you came here to this review first & managed to avoid it.

So, all in all, it’s easy to see that the Dubai Profit Now website is full of red flags. Once you actually just stop & take a moment to look around the website (without feeling rushed by the fake timer) you’ll see that they’re pretty easy to spot.

Is Dubai Profit Now a Scam?

Yes, Dubai Profit Now is a scam. The “app” is completely fake & has been designed to trick you into depositing with a rogue binary options broker who will attempt to part you with your cash.

As promised, you do get access to an “app” but the problem is that the app is not really connected to any live markets. It’s essentially just a video game & all of the “profits” are totally fake.

So it’s safe to say that the Dubai Profit Now system should certainly be avoided & instead if you’re still interested in a way to earn money online legitimately, I’d recommend you stick with affiliate marketing.

Affiliate marketing provides a much safer (and lower-cost) way to earn online & the good news is that I’ve even put together a completely free step-by-step guide that explains how you can get started.

But whatever you decide to do, I just hope that this honest review of Dubai Profit Now has helped you to avoid the scam & save your hard-earned cash.