The Easy Retired Millionaire system promises to provide you with a “done-for-you” way to begin making money online… In fact, it literally leads you into believing that you can begin making money right after signing up, even if you’ve never made a single penny online before… 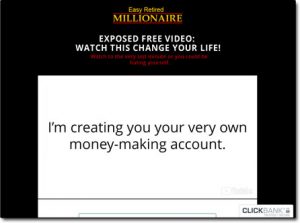 You’re told that all you need to do is hand over around $47 (or £37 depending on where you live) & that you’ll get access to a passive stream of income from the so-called “secret system”… But no doubt a bold claim like that has left you feeling pretty sceptical, so what’s the deal – is it really legit or is the Easy Retired Millionaire system a scam that’ll just result in you spending money rather than actually making it?

Thankfully you’ve landed in the right place to find out as I’ve taken a closer look into the whole thing & in this review, I’ll be uncovering everything you need to know including how it all works & whether or not you can really make any money with it.

What Is Easy Retired Millionaire?

Well according to the video promoting it, the Easy Retired Millionaire system is a so-called “secret system” that will provide you with your very own money-making account, and you’re told that this account is being set up “live” as you watch the video.

However the first thing that I’ll point out is that the whole “account being setup for you live as you watch the video” thing is a complete lie. You’ll be able to see that for yourself by refreshing the page, because if you do you’ll see that the video will play again & that the whole thing is actually just prerecorded…

In reality there isn’t anybody creating anything “live” for you at the other end like they want you to believe & the reason I can be so confident in saying that is because I’ve come across this exact same system before, only previously it was launched under a different name.

The last time I seen it the whole thing was called Your Easy Business & if you check out the review I wrote exposing that system then you’ll see the 2 systems (that and the Easy Retired Millionaire system) are actually exactly the same.

The reason the creators of the system keep changing the name is because the whole thing is actually just a scam & they’re just trying to escape the negative reviews so that they can continue parting people with their hard earned cash.

There is no “money-making account” like the person in the video tells you, instead the whole thing is a hoax & if you happen to buy into the system you will likely just see yourself spending money as opposed to actually making it because what you’re really provided with is just complete junk.

But obviously I don’t expect you to just take my word for that, after all I appreciate that you might have been really hoping that the Easy Retired Millionaire system was going to work for you… So instead I’ll show you how it all works so that you can see what’s really going on here for yourself. 🙂

How Does Easy Retired Millionaire Work?

Okay so simply put the Easy Retired Millionaire system doesn’t work as promised, and instead of getting access to some sort of “done-for-you” money-making system like you’re led to believe, all you really get access to is some low-quality training on affiliate marketing.

Now don’t get me wrong here, affiliate marketing itself is a legitimate & excellent way to make money online… But the reason I’m bashing the Easy Retired Millionaire system is because the training they provide you with won’t help you get anywhere.

Like I say, they lead you into believing that you’re going to be getting access to a system that’s already setup for you & that will start making you money right away but that’s not true. Instead after handing over your money you’ll be left to find out that you’ve got to follow training & set up your business from scratch.

If you want to make money through affiliate marketing you could just sign up at somewhere like Commission Academy instead which is free – and they provide you with all the tools you need to see success too (which the Easy Retired Millionaire system doesn’t).

As far as I’m concerned the creators of the Easy Retired Millionaire system aren’t really interested in your success at all, they just want to make money at your expense & that’s likely why they lie to you about what the system actually entails, making it seem much easier than it actually is.

In fact in my opinion the only reason they give you any training at all is just so that they can prevent you from getting a refund, because by giving you “some” training they can claim that they delivered you a product & that you are no longer eligible for your money back… A cunning trick often used by these types of get-rich-quick style scams.

But the slightly positive thing about the Easy Retired Millionaire system is that it’s being sold through a merchant named ClickBank, meaning that if you’ve already bought into it then you should stand a fairly good chance of getting your money back by contacting ClickBank directly.

No doubt if you contact the creators of the Easy Retired Millionaire system they’ll reject (or ignore) your refund request – but get in touch with ClickBank directly which is the company that manages the payments & they should hopefully be able to sort out a refund for you because they as a merchant are a legit company & don’t like people making chargebacks.

Is Easy Retired Millionaire a Scam?

In my opinion yes, the whole thing is a complete utter scam & it’s been designed purely so that the creators can earn themselves money at your expense (and the expense of others).

They basically tell you a whole bunch of lies to get you to buy into the system & then once you’ve bought into it they essentially provide you with something totally different to what you were promised. This is known as a bait & switch tactic & as far as I’m concerned they’re just tricking you into parting with your hard earned cash.

The truth is that if you do buy into the Easy Retired Millionaire system you will be highly unlikely to make money because the training that’s found inside is simply so poor… And like I mentioned earlier in this review there is absolutely no need to pay money to sign up to the Easy Retired Millionaire system for the training when you can get much better make-money training for free at legitimate places like Commission Academy.

So overall my advice to you would be to avoid the Easy Retired Millionaire system & it’s safe to say I won’t be recommending it because as far as I’m concerned you won’t find any value from it.

If however you do happen to have any further questions or comments about it though then don’t hesitate to leave them below & I’ll do my best to get back to you as quickly as possible.

2 thoughts on “Easy Retired Millionaire – Scam System or Legit? My Review Exposes How It Works!”