Founded by a Russian man named Lado Okhotnikov, Forsage claims to be the world’s first 100% decentralized crowdfunding platform & essentially promises to provide you with an easy way to make money. 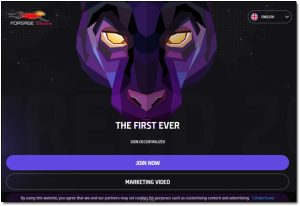 All you need to do, according to the Forsage website, is simply sign up & make an initial investment then begin recruiting others, encouraging them to do the same.

But I know what you’re probably thinking… That sounds an awful lot like a pyramid scheme.

And I agree, it does.

So what’s the truth about Forsage? Is it actually a legitimate crowdfunding platform like it claims to be? Or is Forsage yet another cryptocurrency scam that you should simply avoid?

Well, you’ve landed in exactly the right place to find out because in this honest Forsage review I’m going to be uncovering everything you need to know, including whether or not you’ll actually be able to make money with it.

As I very briefly touched on above, Forsage claims to be the world’s first 100% decentralized crowdfunding platform & it claims to have been built on revolutionary Smart Contract technology.

So that claim can be taken with a pinch of salt, as it’s simply not true.

But that’s not the only bold claim Forsage makes. On top of claiming to be the world’s first decentralized crowdfunding platform, Forsage also claims to offer a risk-free way to earn millions.

Yep, that’s right – Forsage claims to offer an amazing opportunity through which you can earn lots of money through their platform. All you need to do is invest & recruit others.

But isn’t that a pyramid scheme?

Well, in short – yes it is… However, Forsage claims that it’s not a pyramid scheme & that it is indeed legit in this broken-English answer found in their FAQ section:

But it doesn’t really take much to see Forsage for what it really is, and as a result, the Philippines SEC actually put out a public warning advising people to avoid Forsage.

“The public is advised NOT TO INVEST or STOP INVESTING in any scheme offered by Forsage,” the Commission wrote.

How Does Forsage Work?

Forsage, like most other Ponzi schemes, gives out a lot of spiel about revolutionary technology & world-changing potential, but ultimately there is nothing special going on at Forsage.

Instead, members are simply signing up, investing & passing money between each other.

This means that although Forsage claims that there is absolutely no risk, there IS risk – because, in order to make any money back, you have to successfully recruit others into the platform.

Importantly, you hope to make back more than you invested before the scheme collapses or gets shut down.

This answer found in their FAQ suggests that once you invest in Forsage, they’ll simply encourage you to reach out to friends on Facebook to try to get them to invest:

What an absolute joke.

I’ve seen many Ponzi schemes come & go over the years, but I’ve seen very few that have shown such obvious signs of being a scam as Forsage does.

Most of them are at least a little bit better at hiding it.

Anyway, carrying on with the Forsage review…

No, absolutely not – in fact, it’s quite the opposite. Forsage is very high risk & the majority of members that join will simply end up losing money rather than actually making it.

The reason for that is because earning money with Forsage relies entirely upon recruiting people. If you cannot recruit people & get them to invest, you won’t make money.

Instead, if you sign up, invest & fail to recruit people, you’ll just lose your investment. So when Lado Okhotnikov states that there’s no risk involved, he’s simply telling lies.

When it comes to the Forsage scam, there are crazy amounts of red flags – such as the broken English, the hyped-up promises & all of the talk about recruiting other members.

On top of that, another red flag is the fact the creator, who would be a multi-millionaire if the platform was real, always records his promotional videos & interviews on a cellphone from his bedroom.

Why doesn’t he have an office?

Why doesn’t he even have somebody to professionally edit or record his videos for him?

The answer is because despite portraying itself as being a huge company, Forsage is nothing more than a Ponzi scheme being operated by 1 man out of a bedroom in Russia.

Plus, the website displays NO licenses whatsoever, which is a requirement for investment websites. You should never, ever invest via an unlicensed website as you will have no financial protection in the event that something goes wrong.

And that’s partly the reason as to why the Philippine’s SEC issued a warning against Forsage in its report.

Is Forsage a Scam?

Forsage is definitely a scam, I can tell you that with 100% certainty. Many other reviewers are scared to say it, but I’ve exposed enough Ponzi schemes to know exactly what it is.

The whole thing relies on new people signing up & investing & as soon as that stops, the scheme will collapse.

I mean yes, the possibility to earn money through Forsage does exist & some expert marketers who are great at recruiting may have indeed actually made money… But the average person will not.

The average person that joins will simply LOSE money.

So I would strongly advise against joining Forsage & instead, if you really want to make money online then I would recommend that you stick with a proven method like affiliate marketing.

Affiliate marketing is my favourite & top recommended way to earn money online – but alongside that, you can also check out my other top recommendations on my top picks page here.

But whatever you decide to do, I sincerely hope that my honest Forsage review here has helped you to see the real truth about the platform & hopefully it’s helped prevent you from investing.

If you still happen to have any questions then don’t hesitate to leave them below & I’ll get back to you as soon as I can. 🙂

2 thoughts on “Is Forsage a Scam or Not? An Honest Forsage Review That You Can Trust”