The Get Weekly Paychecks system promises that it can provide you with a way to begin earning “huge weekly paychecks” of between $1,500 & $4,500 online and it allegedly doesn’t involve selling, MLM or cold calling. 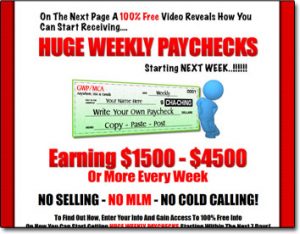 But you’ll likely agree with me when I say that that’s a pretty bold claim to make… So what’s the deal?

Is it actually legit – or is Get Weekly Paychecks a scam that’ll just see you spending money rather than actually making it?

Thankfully you’ve landed in the right place to find out because I’ve taken a closer look into it & in this review, I’ll be uncovering everything you need to know about it including how it all works & whether or not you can really make any money with it.

What Is Get Weekly Paychecks?

As I briefly touched on above the Get Weekly Paychecks system is a website that claims it can enable you to earn huge weekly paychecks of around $1,500 to $4,500 online with relative ease…

You’re led to believe that it’ll all be really simple & that most of the heavy lifting has been pretty much done for you so that you can just sign up to the system & begin making money without having to put in a great deal of work.

But in truth the Get Weekly Paychecks system isn’t really a “system” at all as such – it’s just a marketing funnel that’s been designed to get you to buy into something called the Motor Club of America.

And just in case you don’t know what the Motor Club of America is, it’s basically a multi-level-marketing company that sells various roadside assistance related packages to residents of the United States & Canada.

This means that in order to participate & potentially profit from the Get Weekly Paychecks system you’ll need to reside in either one of those countries, otherwise you won’t be able to sign up to MCA which is what the whole thing is selling.

And whilst the Get Weekly Paychecks system claims there’s no MLM involved, I can tell you right from the off that’s a lie… The whole thing is 100% based around recruiting…

How Does Get Weekly Paychecks Work?

So as I touched on in the last section of the review MCA is a multi-level-marketing company or MLM & it’s all based around roadside assistance. They basically sell membership plans which offer various benefits related to roadside assistance… Such as breakdown cover, arrest bond cover, travel reimbursement etc…

I won’t go too in-depth into their plans here because honestly, it’s not all that important since the real focus with the Get Weekly Paychecks is not on the plans themselves… It’s on the “recruiting” side of things…

See like I just said MCA is a multi-level-marketing company, which means you can sign up & promote their plans in return for a commission… But with it being MLM you can also recruit others & earn from their efforts too…

And as you can now likely see, the reason I didn’t go too in-depth into the Motor Club of America’s membership plans here is that people are not really buying the plans for the benefits… They’re just buying them so that they can become a part of the business opportunity to earn more money through the Get Weekly Paychecks program.

Which introduces a big problem…

The problem is that the whole thing now just pretty much resembles a pyramid scheme. I mean people are just buying in for the sake of making money, then they’re getting others to buy in to make money just like they did…

I mean just take a look at how the members are being told to promote this thing: 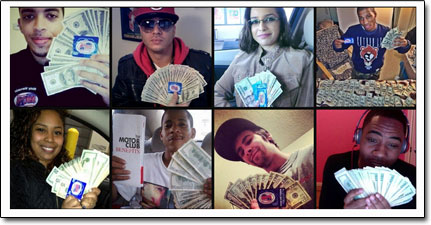 “Flash some cash on social media and people will get interested“… That’s what they’re told to do.

Now there is of course technically a product here, and MCA by itself would certainly be legit…BUT the way the whole thing is being promoted through Get Weekly Paychecks is very “dodgy” to say the least… And it’s clear the real focus is just on making money, not the roadside benefits.

But I’m even more worried that the creators of MCA are letting it happen.

The reason I’m worried about that is that the FCA (who regulate this sort of stuff) really do not like this sort of thing & they will shut stuff like this down without a second thought, just like they did with Digital Altitude… So the Get Weekly Paychecks system could land them in big trouble if they caught wind of what was really going on with it all.

The truth is that yes, you can make money with MCA & the Get Weekly Paychecks program – but what you should know is that it’s not going to be anywhere as easy as the creators make out it will.

They lead you to believe that you’ll just be able to copy done-for-you advertisements, paste them online & start making money… However, as you can likely imagine things just ain’t that simple.

Heck if it was really that easy to market things online then everybody would be rich.

Basically, unless you’re already an expert at online marketing you’re going to struggle to get off the ground with the Get Weekly Paychecks because like I say the whole thing is based around recruiting.

And I mean sure, there is some training offered inside of the Get Weekly Paychecks system that is put there to help you, but realistically this training isn’t going to see you become a marketing superstar… It’s just too basic.

Now don’t get me wrong though, if you are good at online marketing & you can get a lot of people to sign up then the opportunity could prove to be quite lucrative – but that still doesn’t stop it from resembling a pyramid scheme.

Do you really want to be spending your efforts promoting something that could potentially end up getting shut down at any moment – resulting in the income you worked so hard for coming to a halt overnight?

I think probably not, which is why I personally just stick with legitimate programs like Commission Academy where you know your efforts are being spent wisely & will pay off for both the short-term AND the long-term.

Is Get Weekly Paychecks a Scam?

Well by definition it’s not really a scam as such, but it’s very misleading & it’s clear to me that the whole thing is entirely based around recruiting & looks to be just operating as a typical pyramid scheme.

I mean sure, there are technically products involved here (and MCA by itself is definitely legit) but the way the Get Weekly Paychecks system is promoting the whole thing has pretty much removed the “products” out of the equation… As far as I’m concerned people are just handing money over to make money, and then recruiting others to do the same…

So, therefore, I am not going to be recommending the program to you because if you do sign up you’ll likely find that things are much harder than you were led to believe & you’ll probably just end up spending more money than you actually ever make.

And like I mentioned earlier in this review, in my opinion, there are better ways to make money online. Rather than risking your money on a “gimmick” like the Get Weekly Paychecks system you’d be better off joining a legitimate program like Commission Academy instead where you’ll learn how to properly make money online the right way.

That’s just my 2 cents anyway… But hopefully, you found this review useful & hopefully it gave you the insight you were looking for into Get Weekly Paychecks. If you do happen to have any further questions or comments though then don’t hesitate to leave them below & I’ll get back to you as soon as possible.