The Green Gold trading system has just recently launched & it promises to provide its visitors with an easy way to get rich from cannabis – even if they know absolutely nothing about online trading whatsoever. 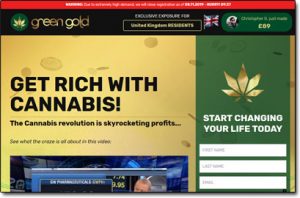 The creator of it (who remains anonymous) claims that you can just sign up, fund your account & start profiting entirely on autopilot as the Green Gold system allegedly does all of the trading work on your behalf.

But is it legit? Or is the Green Gold system a scam that you should just avoid? That’s the important question…

And I’m really glad that you came here to my Green Gold review before signing up to it because I can tell you right from the off that the whole thing is certainly not what it seems… In fact, it’s actually pretty darn dangerous.

What Is Green Gold?

So, in short, the Green Gold system is essentially an automated trading system & it claims that it can generate you guaranteed profits by making automated trades of cannabis stocks entirely on your behalf.

The website promoting the system refers to the legalisation of cannabis as “the cannabis revolution” and states that the market has grown by over 200% over the space of 1 year alone & suggests that it will continue to do so.

It claims that the Green Gold system will enable you to get in on it & get your slice of what they call a $35 billion pie.

You’re told that all you need to do is sign up, fund your account & that you’ll then be able to expect profits of hundreds if not thousands of dollars per day… All on complete autopilot without you having to do a single thing at all.

But it all just sounds WAY too good to be true, doesn’t it?

I mean if this thing really works & has been featured on the news as it claims to have been then why on earth isn’t everybody using it?

Why are people still working at jobs that they dislike if they can simply sign up to the Green Gold system and earn a larger income all on complete autopilot without actually having to do anything?

Well, the answer is because the whole thing is actually just a scam. It’s not set out to help you make money like it claims to be at all, it’s actually just set out to take money from you instead so that the people behind it can earn at your expense.

The reason I can say that so confidently is because I’ve actually seen this exact same scam several times before. It’s previously been named Green Leaf Fortune, Cannabis Millionaire & Cannabis Trader.

The person behind it simply keeps on changing the name of it in an attempt to escape the negative reviews which expose the truth so that he can continue tricking people into signing up and earning at their expense.

But how exactly does the scam work? What are the dangers? Keep reading because that’s exactly what I’m going to explain next…

How Does Green Gold Work?

So the Green Gold system basically leads you towards believing that everything has been done for you & that you can just simply sign up, deposit with the broker that they recommend & then begin making money…

But that’s NOT how it works.

You see there’s one very important thing which the Green Gold website fails to make clear, which is the fact that the creator of that website & the broker that you’re “recommended” are both affiliated.

This means that if you sign up with them & make a deposit, the person behind the Green Gold system gets paid a commission.

You’re also not told that the broker you’re “recommended” is an unlicensed binary options broker – and this small fact alone proves that the whole thing doesn’t really work as promised, because it’s simply not possible.

You see binary options brokers don’t add fees to their trades which means that they only make money when you lose money. If you win (which is very rare) then the broker actually loses money, because they have to pay you.

So with that in mind ask yourself this – why on earth would a binary options broker that only makes money when you lose money, pay commissions to the creator of a system which could supposedly guarantee you winning trades?

They wouldn’t… There’s absolutely no way because such a system would put the broker out of business overnight.

So put aside all on the nonsense that you’re told on the Green Gold website – it’s all lies. In reality, the whole Green Gold website is just a trick to get you to deposit with an unlicensed binary options broker so that the creator can earn a commission at your expense.

And you might just be thinking that after depositing you’ll be left to find out the hard way that the system doesn’t really work as you were promised – but nope, unfortunately, the scam is actually much more cunning than that.

You see after depositing funds with the broker that you’re “recommended” you will indeed get access to a trading system as you were promised and the system will indeed appear to be generating profits on your behalf.

The problem though is that this too is fake. The creator has built a fake system which makes pretends trades in an attempt to trick you into making even more deposits so that he can once again earn more commissions at your expense.

Naturally, this catches many people out because they think they’re actually making money & they’re told that by depositing more to trade with they can increase the size of their overall profits…

Sadly though it’s nothing more than a video game… The profits aren’t real & people are only left to discover that at the end when they try to request a withdrawal.

Their withdrawal request will either get ignored, refused – or the broker may even ask for more money in order to “release the withdrawal” but as you can probably guess this is just a further part of the scam.

What’s worse is that because the broker is unlicensed there’s not a great deal you can do… Which is why you should never ever deposit money via an unlicensed system like the Green Gold system regardless of what they tell you.

If you’re still thinking about trying it out despite what I’ve already said above in this review (which unfortunately I know some people will be) then I want to provide you with some additional information which hands-down proves it’s not legit.

For example, take the countdown timer at the top of the Green Gold website (as shown below):

At the time of writing this review, the countdown timer says that registrations will close at the end of the day… But that’s odd because I actually visited the system’s website yesterday and it said the exact same thing.

Registrations didn’t close – instead, they just changed the date…

And the reason for this is because it’s just a false scarcity tactic. The creators of Green Gold want to try to rush you into signing up so that you feel you don’t have time to look for reviews because they know that if you look for reviews you’ll find out it’s a scam.

On top of that though if you take a look around the Green Gold website then you’ll discover that there’s absolutely NO details whatsoever as to who’s behind the whole thing. No names, no company name & no addresses…

Why on earth would you want to deposit money via an anonymous website? You may as well just hand your cash over to a stranger in the street…

When it comes to investment or trading-related websites you should always look to see if they hold a license as it’s a requirement by law for them to not only hold one but to also display details of it on their website.

Is Green Gold a Scam?

Without a doubt, the Green Gold trading system is definitely a scam. The whole thing has been built upon lies & deceit & its sole intention is to trick you into handing over your cash so that its creators can earn at your expense.

As I mentioned throughout this review the whole thing is just a ploy to get you to deposit money with an unlicensed binary options broker that the creator of the Green Gold system is affiliated with.

It, therefore, comes without saying that it should definitely be avoided because the only thing it’ll help you do is LOSE money, not earn it.

Instead, if you really want to earn money online legitimately then I would suggest you check out one of these methods from my top picks page. Those are all methods that are proven to work & they’re the best methods I’ve found.

I’ll point out here too that one of my all-time recommendations for generating a good income online is something called affiliate marketing. The reason I say that is because it’s actually the same way I personally make most of my own money online.

Affiliate marketing basically involves you promoting products or services in return for commissions and the amount you can earn with it is totally uncapped. The harder you work, the more you can earn… Plus you can get started with it for free over at Wealthy Affiliate.

But whatever you decide to do I just sincerely hope that my review of Green Gold here has given you a good insight into how the whole thing really works & I hope it has helped prevent you from losing any money.

If you have any further questions or comments about it then don’t hesitate to leave them below. 🙂