In this review I’m going to be taking a look at the Home Job Source system which claims it can teach you how to build a full-time income just by posting links online, a pretty bold claim I think you’ll agree.

According to the Home Job Source website itself, providing you have just 60 minutes to spare per day & a computer with an internet connection you can begin profiting through this system, even without experience…

But is it really legit or is it just another work from home scam? And can you really make money with it?

Those are the exact things I’ll be revealing in this review so if you’ve came across the Home Job Source system & you’re wondering if it really works then you can rest assured you’ve landed in the right place to find out.

And before I get started it’s worth mentioning that I’m not affiliated with the Home Job Source system meaning you’ll be getting the unbiased honest truth because unlike other reviewers I’m not getting paid for getting you to sign up.

So What Exactly Is The Home Job Source System? 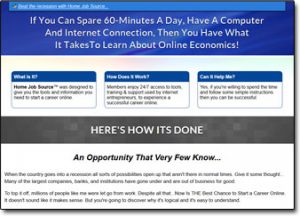 The Home Job Source system claims to be everything you need to start a career online, and it says that providing you’re willing to follow some simple step-by-step instructions it can help you find massive success online.

However whilst that all sounds fair & well the Home Job Source system actually looks & sounds very similar to a system named Home Job Placement which sadly turned out to be nothing but a scam.

Therefore I wouldn’t advise you go hitting that “purchase” button on the Home Job Source system just yet because I have a strong feeling that like the Home Job Placement system this one may also be a scam.

How Does The Home Job Source System Work?

Unlike typical online scams the website for the Home Job Source system actually goes into quite a bit of detail on how you will allegedly make money if you decide to go ahead & buy in for the $97 fee.

It claims that once you sign up you’ll be given access to a training centre through which you’ll learn how you can get paid commissions by various big name companies simply for posting links online.

This is what’s known as affiliate marketing, and whilst it is actually a legitimate way to make a lot of money online there is a big problem with the Home Job Source training & that’s the fact that it’s really low quality.

You see as per my suspicion the Home Job Source system isn’t any different to the other link posting scams that have come before it. The intention of the website is to make you feel that after paying the $97 you’ll get access to some sort of proven method which will almost instantly enable you to start seeing results but that couldn’t be further from the truth.

Firstly I’ve seen the training provided by the Home Job Source system & it’s extremely poor quality – there’s no way that as a newcomer you’d be able to make any money as a result of following it, especially not the kind of income levels that the website makes out.

Secondly I feel that the Home Job Source over hypes everything just to get you to part with your $97. Whilst you can make money with affiliate marketing it takes quite a lot of work & certainly doesn’t happen overnight.

The Home Job Source system makes out that you can just post a couple of links and then “sit back & relax whilst the money comes in” but being in this industry for over 5 years I just know that absolutely isn’t true.

So Is The Home Job Source System A Scam?

I’m going to come out & say that yes, I feel that the Home Job Source system is indeed a scam. Whilst the core method (affiliate marketing) may be genuine in my opinion there is no way you’re going to make money as a result of following the Home Job Source training, and it certainly isn’t worth paying $97 for.

On top of that they have really hyped everything up & as mentioned above you’re led to believe that after you hand the $97 over you’ll be provided with some sort of method that will give you almost instant results which couldn’t be further from the truth.

Basically I believe that no matter who you are or what level of online experience you have you will find yourself disappointed after buying into the Home Job Source system and then they will make it very difficult for you to obtain a refund, which in my opinion is a trait of a scam.

The other big issue is that after entering your email address on the initial page you’ll find your inbox getting bombarded with spam emails promoting various other systems & make-money opportunities. This means that whilst this system only costs $97, over the long-term you could see yourself getting drawn into several other scams as a result of putting your email into this system.

And on top of that the fact that this system has decided to operate under several different names (such as Home Job Position & Home Job Placement) is a MAJOR red flag. That’s a common trait for a scam as they usually do it in an effort to try & escape negative reviews.

Should You Join? My Overall Verdict

I’m not going to be recommending that you join Home Job Source, in fact I’m actually going to be doing the opposite & advising that you stay away from it because in my opinion it’s just another work from home scam looking to part you with your cash.

They’ve incorporated affiliate marketing into it to try & make you believe it’s a genuine training program that will enable you to build a legitimate income but in truth they’re just trying to suck $97 out of you.

It’s unfortunately really because it puts a bad name on affiliate marketing, but let me make it clear that affiliate marketing in general is a 100% legitimate way to build an income online & it’s the method I personally use to generate my own income.

If you’re still interested in learning how to build an income online the right way then my advice would be for you to check out Wealthy Affiliate instead which is a reputable company that gives you genuine affiliate marketing (for free).