Whilst checking my emails this morning I was confronted with a message from a stranger promoting something named the Home Job Position system. Now I wouldn’t usually recommend opening suspicious emails, but since my business lies in exposing online scams I figured I’d check it out to see what it was all about. 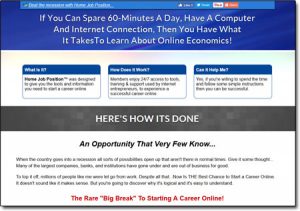 The email claimed that this system would be the answer to my prayers as apparently if I had just one hour to spare per day & a computer with internet access I could begin making hundreds of dollars per day without any prior technical experience.

So naturally, it comes without saying that with those extremely bold claims I was left very sceptical right from the off. And it turned out I had good reason to be sceptical…

Home Job Position Is Nothing New

And it’s certainly not “The #1 Work From Home System” which it claims to be – in fact, it’s actually quite the opposite as I can immediately tell you that this system is nothing but a flat out scam preying on newcomers to the world of online business.

The reason I can say that so confidently is because I’ve actually seen this exact system before, but launched under several different names.

I suspect the reason they’re changing their name so frequently is that people like myself are exposing these scams for what they really are. They’re therefore changing the name to get away from the negative reviews so that they can continue to part more people with their hard-earned cash.

It’s unfortunate, and chances are they’re probably going to do it again once they catch sight of this review & others online but sadly there’s nothing we can do to stop them. I am just putting this review together today in an effort to help prevent people from falling victim to this particular “round” of the scam.

After all, preventing 1 person from losing their money is better than doing nothing at all right? Well, that’s my personal opinion anyway…

So before I crack on & explain how this scam actually operates, the first thing I want to do is make it very clear that you should not get involved with the Home Job Position opportunity regardless of how tempting it may seem to “try it out”.

Basically, the big problem with the Home Job Position system (and it’s other aliases) is the fact that it’s extremely misleading. You’re led to believe that you’re being offered some kind of online “job” & that you’ll be able to earn money as a direct result of doing some kind of “work” – but that’s simply not true.

What you’re actually being sold is some affiliate marketing training (and very poor training at that). Now I want to make it clear that affiliate marketing is a legit & effective way to make money online, but it’s not magical & it ain’t gonna happen overnight… Especially not using the methods taught by the Home Job Position system.

In fact, you’d be lucky to make any money at all using the methods you’re sold through Home Job Position.

The problem is you’re only left to find out all this after you’ve paid the money and by that point you’ve been parted with your cash – it’s too late. In my opinion, if you’re sold something & the product/service you get isn’t as advertised & the company refuses to give you your money back then you’ve been scammed.

It’s like somebody advertising a bar of gold for $1,000 – you pay the money expecting the gold, but if they send you a bar of metal instead & refuse to give you a refund then I’d imagine you wouldn’t be best pleased! It’s pretty much the same story with the Home Job Position system… What they’re promising & what they’re giving you are 2 completely different things.

So Back To This “Affiliate Marketing” Thing… 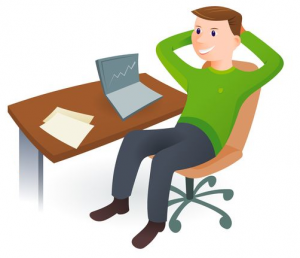 The main thing I don’t like about these types of work from home “systems” is the fact that they tarnish the reputation of the make money online industry. Basically, they make it seem scammy & put people off – when there actually is legit ways for people to make money online (potentially even job replacing income).

One of those ways to make money is something called affiliate marketing – which in my opinion is the best way to make money online.

If you’ve never heard about it before it’s basically where you affiliate yourself with a company (such as Amazon, iTunes etc) and have the opportunity to earn commissions by referring people through a unique link… Meaning if they buy via you, you get a percentage of the sale.

There are many, many people who are making 5, 6 and even 7 figure incomes online through affiliate marketing and it’s not all that difficult to get started. In fact, this company here has laid out step-by-step training which shows the best way for you to get started.

The important thing to note though is that whilst the internet is a wonderful tool that can help you make money from remote locations, it’s not magical – which means in order to make some money you’re going to have to put in some work & chances are it ain’t gonna happen overnight. Sorry if I’ve burst your bubble, but I just want to give the honest truth because these “Home Job Position” type systems are giving people false perceptions of what is & isn’t achievable.

By now it should be quite clear to you that the Home Job Position system is nothing more than a scam that’s preying on newcomers or desperate people & attempting to part them with their hard-earned cash by misleading them into thinking they can make some quick money.

They’ve even used fake news endorsements (such as CNN) to try & make the system seem believable but none of those media outlets has ever published stories about this system. It’s easy to find that out by running a quick search on the news websites themselves – no surprise when there are zero results.

The way they get around it is by claiming that “work from home opportunities have been featured in….”, they don’t actually mention that the particular system has been featured on the news (because it hasn’t).

So basically you should just give this system a wide berth & avoid it because it will do nothing but disappoint you, and it certainly won’t help you make any money. If you are still looking for a genuine way to build an income online then my advice would be for you to try this instead. IMO that’s the best way to get started.

Anyway with all that being said I hope my review was able to prevent you from losing your hard-earned cash to this unethical scam system. As I say it’ll probably, unfortunately, launch under a different name soon, but in the meantime be sure to share this post to help prevent as many people falling victim as you can.

If you happen to have any comments or questions don’t hesitate to leave them below, I always do my best to respond as quickly as I can.