Up until 2017, cryptocurrencies did make overnight millionaires with the likes of Bitcoin and Ethereum. Now thousands are still trying their luck by investing in digital currency and mining for coins after hearing the success stories. Kryptogenex is one of the latest cryptocurrency programs to launch & it jumps right in with some seemingly magnificent claims promising easy online riches. 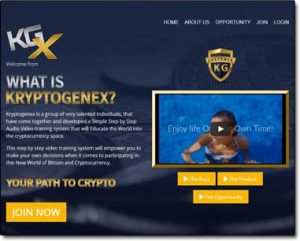 A group of individuals have asked me for a well-researched Kryptogenex review so here it is. It took me over a couple of weeks to gather the information and figure out exactly how it all works but I have finally got around to publishing my findings.

This review will unearth the truth behind the Kryptogenex scam rumours. It is obviously too early to decide whether the platform actually works or not but keep reading to find the answer I conclude…

It’s no secret that cryptocurrency – especially Bitcoin – has materialized the dreams of many by converting 10s into 1000s, and even millions. Considering the global scale, such a thing has never happened before in the entire history of mankind… However, since the beginning of the year 2018, there has been a significant decline in the value of 99% of the total 1500 digital currencies and Bitcoin is no exception.

(the chart shown above is courtesy of CoinDesk)

Kryptogenex claims to be a software/program which educates you about the working of digital currency. The program is said to have addressed Bitcoin in particular and decentralized blockchain in general. If you’ve ever invested or looked at investing in digital currency, you must have been aware of the complexities involved in the purchase, sale, and exchange of any digital currency. There are various exchanges which serve the purpose & there are digital wallets (such as CoinBase) with unique and complex credentials that are revealed to nobody in the world but the owners of the wallets.

Kryptogenex seems to attract people because the mind behind this system knows that everybody wants to invest in cryptocurrencies but the system is so complex that most people worry about coin theft and hacking etc. We all know that Bitcoin once turned sand into gold dust and even gold bars. But gone are the days when somebody had the opportunity to purchase a coin for as little as $10 to receive $20,000 after three or four years. Now you can only hit the jackpot if you happen to be the chosen one, making the ideal move at an extremely rare moment.

These days, digital currency prevails all over the world and the crypto-fever has taken over. It is hard to expect an unrealistic return once more. Things have changed a lot. It was Bitcoin to start with but today we have over 1500 currencies. Nobody knows which one is ready to shoot. Even if a currency was to elevate beyond realistic proportion, how can you predict it? Do you have enough time to sit, analyse and judge what’s going on with every single cryptocurrency? Can you even memorize the names of all these currencies?

The Creator Hides Behind a Curtain

Who is running the Kryptogenex platform? The website contains no hints whatsoever! I mean somebody is selling a software/package priced at $250 but doesn’t want to reveal his/her identity. This definitely triggers suspicion because the industry itself is complex and tricky in the first place & it’s typically scammers that choose to keep their identities hidden.

As far as I can see after doing some digging, a guy named Stephen McCullough is believed to be the mastermind behind the Kryptogenex software. It took me a whole night to explore his history and what I found actually just intensified my level of suspicion.

The reason I say that is because SkyBiz, a company that was warned and then sued by the FTC back in 2011 for operating as a pyramid scheme & being involved in illegal practices was actually co-owned by McCullough. This gave me a clear idea of what Kryptogenex is all about. Let’s now see what this platform is up to…

The website advertises the provision of a comprehensive training program which deals with the investment in Bitcoin. Everybody out there is actually looking to know more and more about Bitcoin, mining, and blockchain. McCullough is actually striking the iron when it is red hot. Everyone is talking about coins, mining, and digital currency. Stockbrokers are also paying keen attention to the New World Order dominated by volatile digital currency.

Crypto-World also features recurring rumours, for instance, the Swedish Government’s plans to launch eKrona, the world’s first digital currency backed by the State/Central Bank. But these are just rumours to encourage more and more people to invest in this relatively undiscovered industry. I’ll even say that even the crypto-experts don’t know much about how the system actually works.

The Kryptogenex training program costs $250 fixed in addition to $50/year (renewal fee). Apart from the training program, you can also recruit more people and earn commissions as a result. The website also advertises the Krypto App which as per their claims facilitates Bitcoin investment. Then there are some other programs such as Kryptorithm. It means that Kryptogenex is also making smart use of the funnel technique. They are actually promoting other programs.

The compensation plans, Silver, Gold, and Platinum are priced at $1,000, $2,000 and $3,000 respectively. These programs actually encourage you to bring in more people and earn commission again each new recruit. Now, this is turning out to be something similar to a pyramid scheme. In addition, there are various categories featuring earning against referrals. We don’t have to go into the details of that because all of that stuff doesn’t make much sense & to be honest, it’s quite easy for me to see what’s really going on here.

Something that looks a lot like the image below is what’s really going on:

In my opinion, Kryptogenex is something pretty close to what I would tend to call a scam. The whole concept is tricky, confusing & looks very similar to a pyramid scheme due to the heavy focus on multi-level recruiting.

The man behind this system also has a notorious history. All of these things combine to force you to avoid this offer & to be honest I would never pay $250 in the first place for such training as there’s plenty of material regarding cryptocurrency investments available on the web for free.

The truth is that at the moment in my opinion cryptocurrency investments are simply far too risky due to the huge fluctuations & as far as I’m concerned there are better ways to make money online – such as affiliate marketing. Affiliate marketing is actually the same method I personally use to make a full-time income online & it’s a proven, legitimate method. If you’d like to you can learn more about it for free (and get everything you need to get started with it) over at Commission Academy.

But anyway that’s just my 2 cents – if you want to go against my advice & invest in cryptocurrency then feel free, but be warned that there is no guarantee you’ll make money… In fact, you could potentially just lose it all instead. Regardless though I still won’t be recommending the Kryptogenex program to you because as I mentioned above in my opinion you’re just paying for information that you can get elsewhere for free.

So hopefully this review gave you the insight into this program that you were looking for & hopefully it gave you a better idea as to how the Kryptogenex platform really works. If you do happen to have any further questions or comments though then don’t hesitate to leave them below & I’ll do my best to respond back to you as soon as possible.