Lotto Profits Supercharged is the name of a new piece of software that’s allegedly been created by a lottery-winning guru named Richard Lustig & it claims to essentially be able to provide you with a secret way to win the lottery. 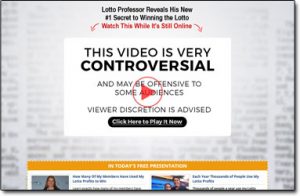 You’re led to believe that a “controversial video” put together by Richard contains his #1 secret to winning the lotto & the website promoting it even claims that multiple Lotto Profits members have already won by following his method.

But is it actually legit? Or is Lotto Profits a scam that’ll just ultimately see you wasting your money?

Well, I’m glad that you decided to do your due diligence & came here to this Lotto Profits review before you signed up because I can immediately tell you that the whole thing is NOT what it seems and that it won’t really help you win the lottery.

What Exactly Is Lotto Profits Supercharged?

Lotto Profits Supercharged, as I briefly touched on above is essentially supposed to be a program that’ll show you how you can win the lottery… And you’re led to believe that it’s been put together by 7-time lottery winner Richard Lustig. 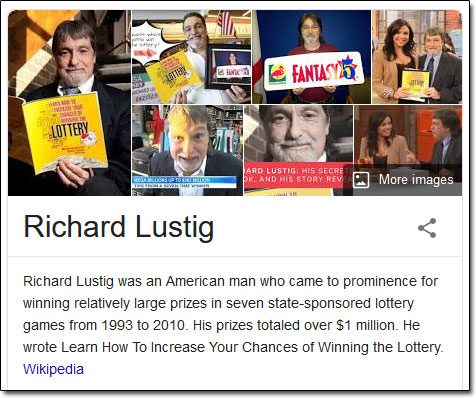 You’re told that through a controversial video provided by the Lotto Profits system, Richard Lustig will be revealing his #1 secret for winning the lottery – and the website even claims that members have already begun winning by following his method.

Firstly, there’s the fact that in order to access the software you’re required to pay a fee of $97 – and you’re also encouraged to purchase 3 other upsells too which add up to another $121… So that’s $218 in total.

Now, why would Richard (or whoever has put the program together) want to charge for it? If the system/method/software really worked as promised then surely they wouldn’t need to sell it to make money – they could just, you know… Keep winning the lottery.

So that on its own is a huge red flag, but then there’s also the fact that the death of Richard Lustig was announced in July 2018 as shown below: 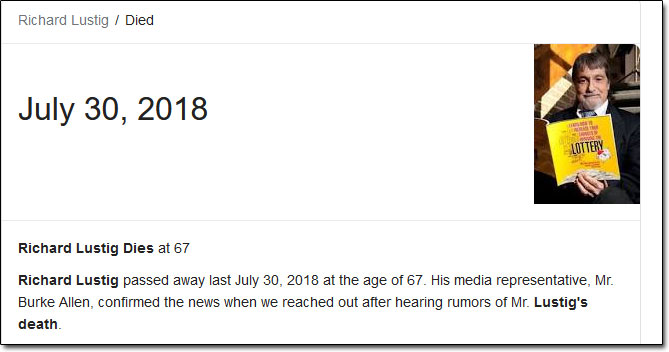 It’s true that Richard Lustig was indeed a 7-time lottery winner, however, his death means that whoever is operating the Lotto Profits Supercharged website & making money from it clearly isn’t Richard Lustig.

They appear to just be using his fame (and the coincidence of him winning the lottery so many times) to trick people into signing up.

And alongside those 2 red-flags, there’s also a disclaimer at the bottom of the Lotto Profits Supercharged website which reads as follows:

So in short that basically says that the whole thing doesn’t actually work – but if you take a look at the screenshot of the disclaimer below you’ll see how ridiculously small they’ve made it in the hope that you won’t see it:

And that’s when it clicked in my mind, I recognised the name Richard Lustig from somewhere… It turned out I’d already exposed 3 other “lottery winning” programs using his name which were as follows:

So it seems that the Lotto Profits Supercharged program is just yet another version of this bogus program.

But What Do You Actually Get Inside?

Of course I wasn’t going to hand over my own money to purchase the program since I know it’s not legit (and I don’t recommend you do either), so instead I searched the web to find details from real members with regards as to what was actually inside.

And then there’s tips saying that you should use websites to find out what numbers have been drawn most often etc.

The problem is that regardless of how many times a number is drawn, it doesn’t mean it’s going to get drawn again… It’s entirely random & that’s the whole nature of a lottery, it’s a lottery.

And then aside from that there’s also some tips on “how to win on scratch-off cards”… But why on earth would you need that? If the “secrets” really worked then you could just win the lottery, right?

Why on earth would you be interested in scratch-off cards?

These reviews from real members speak volumes about it: 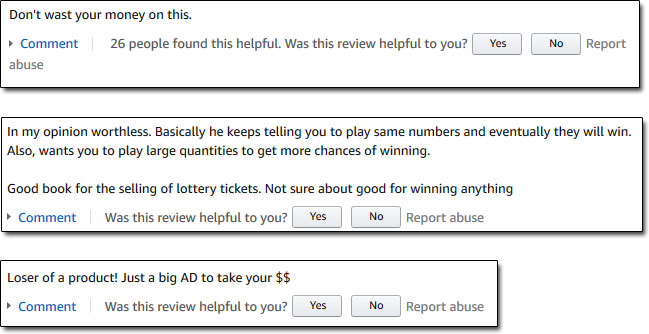 And the real kicker here is that not only is the website tricking people into purchasing something that’s essentially useless (as they said themselves in their disclaimer) – but it’s also getting people involved in the slippery slope of gambling.

It’s encouraging people to gamble & claiming that they’ll win, but they won’t – and so if you get involved with the Lotto Profits software you could find yourself losing a HECK of a lot of money.

My Verdict – Is The Lotto Profits Software a Scam?

Some people might argue that the Lotto Profits software isn’t a scam because you do actually get access to some “tips” in return for your money – but I would argue that in my opinion, it IS a scam because of that fact that it’s built on lies & deceit.

You see the website sells the program by claiming that it’s going to reveal a secret that will enable you to win the lottery, and then it asks you to hand over your cash to discover what the secret is…

In my opinion that makes it a scam…

But the good news is that even though the Lotto Profits software itself may not be legit, there are still plenty of ways you can earn money online if earning more money is what you’re looking to do.

And I’ll share my own “secret” right here with you – which is that in my opinion affiliate marketing is one of the best ways you can earn good money online (and it’s the same way that I personally make most of my own money online).

So if you are indeed looking to make good money online legitimately then I’d highly recommend you check out Wealthy Affiliate before you leave which is where you’ll find out more about affiliate marketing (and be able to get started with it).

Or alternatively, you can check out my huge list of over 72+ ways to make money online right here.

But whatever you decide to do I just sincerely hope that my review of Lotto Profits Supercharged here has given you a good insight into what you can really expect from the program & I hope it’s helped you to save your cash.

If you still happen to have any further questions or comments about it then don’t hesitate to leave them below & as always I’ll respond ASAP. 🙂