In this review, I’m going to be taking a closer look at the Lucrosa system which is something that’s supposedly been created by a former hedge fund manager named John Lucrosa who claims the system is capable of generating people guaranteed profits of $210,000 per month. 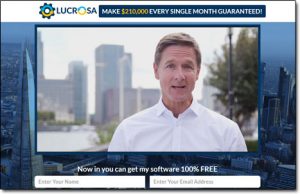 I’m sure you’ll agree with when I say that’s an extremely bold claim, so what’s the deal?

Is it actually legit? Or is the Lucrosa system a scam that’s simply out to do nothing other than part you with your hard-earned cash?

That’s exactly what I’m going to be getting to the bottom of here in this Lucrosa review, along with uncovering how it all works, whether or not it’s legit & if you can really make any money at all with it.

Launched by a so-called former British hedge fund manager named John Lucrosa, the Lucrosa system claims to be an automated online trading system that can generate you guaranteed profits of $210,000 per month. 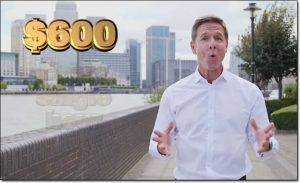 John Lucrosa himself even claims to give you $600 in cash literally for just watching the video he’s put together explaining how the system works – and he also says that if you sign up you’ll be able to earn $7,250 within your very first 24 hours.

Naturally, these claims would probably make you become very sceptical about the system, but the fact that it’s backed up by several testimonials throughout the video makes it become more believable…

Couple that with the fact that you’re shown several imagines of John enjoying “the good life” as he drives around London in his flashy sports car & you begin to think maybe, just maybe it actually works…

Well, that is until you get to the end of the video at least, which is when you realize that John Lucrosa has lied to you & that there is no $600 cash gift for watching the video as he initially promised you.

This tactic of offering to pay you money to watch the video which you’re left to find out doesn’t materialize is a common trait of a scam & lately, I’ve seen several other systems saying similar things such as the My Millionaire Mentor & The Job Quitter systems.

The reason they promise you the money is that they know that the chances are without doing that you’d just click away from the video but they want you to watch the whole thing so that they can lure you in so they offer you money in the hope that it will make you stick around.

But of course you then later find out that the offer doesn’t really exist & that you’d just been lied to.

John Lucrosa claims that the system has been designed in a way so that literally anybody can profit from it, even those who are completely brand new to trading & don’t even know a thing about it.

He states that it’s literally as easy as pushing a button and that all you need to do is sign up, deposit your funds & hit start trading. From there he claims that the system will handle the rest.

According to him, the system has a 99% chance of making a winning trade, so whilst it does have the potential to make losses overall the winning trades will clearly outweigh them & put you into profit.

Whilst you’re led to believe that the Lucrosa system is some sort of program that can’t really fail you and that provides you with an easy way to make a lot of money, unfortunately, it actually does quite the opposite.

John Lucrosa who apparently created the system doesn’t exist – the guy you see in the video is just an actor. This system has actually been put together by an online marketer, not a former hedge fund manager.

The marketer who has actually created the Lucrosa system remains anonymous, but his intent is obvious – he (or she) is simply out to do nothing other than part you with your hard-earned cash.

You see what you’ll notice as you progress through the Lucrosa system is that prior to getting access to the “system” you’ll be required to make a deposit through their recommended broker & until you do this you can’t continue.

If you already have broker accounts elsewhere it doesn’t matter as you can’t use them – you’re literally forced to sign up & deposit with the broker that they specifically recommend to you.

This is because the marketer that’s put this system together has affiliated himself with that particular broker, meaning he gets paid huge commissions for each person he refers to the broker when they deposit their funds.

Then sadly after depositing funds, you’ll be left to find out that the Lucrosa system doesn’t work as promised – whereas you were promised 99% winning trades, in reality, you’ll be lucky to make a single winning trade.

All you will see from here onward is your account balance quickly depleting.

And if you think you can withdraw your funds then think again, the brokers themselves are also in on this scam & they’ll make it almost impossible for you to retrieve any of your funds.

So ultimately the Lucrosa system itself is nothing more than a marketing ploy which has been put together in an effort to make you believe you’ll be able to profit so that you’ll be more likely to deposit.

Because as I mentioned above the more people that sign up & deposit the more money the marketer who’s put this system together will get paid in commissions for referring you to the broker.

Yes, it is, it’s clear to me that through the Lucrosa system you’re fed nothing but lies that have been put together in an effort to convince you to sign up & deposit funds with their recommended broker so that they can earn commissions at your expense.

This is a program that’s been designed to make one person wealthy & one person only – the creator.

The biggest problem with this particular system is that it’s made out to be free so it kind of lulls you into a false sense of security, but when you can see that they are working with the brokers it quickly becomes clear how the scam operates & where they are getting their money from, which many people might not immediately realize.

But it’s not the first binary options scam to launch, in fact, I’ve reviewed hundreds before this one – that’s why I ended up putting a dedicated page together showing people how to get their money back from binary options scams.

So yes as you’ve probably already figured out this system will be getting a huge thumbs down from me & I certainly won’t be recommending it because it’s clearly nothing but a scam that’s out to part you with your cash.