Millionaire Biz Pro is the name of an online money-making system which promises to provide you with the ability to turn a mere investment of $47 into a whopping $1,067.88 worth of free cash. 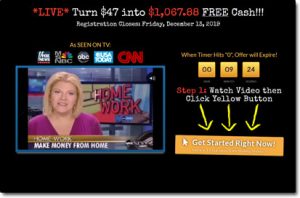 You’re led to believe that you can literally just sign up & make money with as little as “1 click”… But is it actually legit?

Or is Millionaire Biz Pro a scam system that you should steer clear of?

Well, I’m glad that you decided to look for reviews of the system before you signed up & came here first because I can immediately tell you that the Millionaire Biz Pro system is nowhere near as great as it claims to be.

What Exactly Is Millionaire Biz Pro?

Millionaire Biz Pro basically portrays itself as being an “automated money-making system” and it even claims to have been featured on high-profile TV news publications such as Fox News & USA Today as shown below:

The website promoting it though (as you’ve probably found out) doesn’t really give away a great deal about exactly how it works. Instead, you’re just told that you can “turn $47 into $1,067.88 free cash”…

It also states that you can do it even if you’re brand new & don’t know the first thing about making money online… Apparently according to the system’s founder (who remains anonymous) you just need to sign up to begin making money.

And you might be tempted into doing exactly that (even though you need to hand over $47 of your own cash first) as the video on the Millionaire Biz Pro website shows a bunch of people who are allegedly making money with the system.

They each claim that it works, that it’s easy & that they’re making thousands thanks to system…

But are they really? And does Millionaire Biz Pro really work?

The answer is no – to both questions – because in reality the Millionaire Biz Pro system has just been designed to trick you into handing over your cash to make its creator wealthy at your expense.

The system hasn’t really been designed to help you make money at all & you’ll be able to see that first hand for yourself when I explain in finer detail below what you actually get “on the inside” after you hand over your cash (which I don’t recommend doing).

How Does Millionaire Biz Pro Work?

So as mentioned in the previous section of this review, Millionaire Biz Pro portrays the idea that it is some sort of “automated money-making system” that you can just sign up to & profit from, but that’s not the case.

In reality, the whole thing is just built upon hyped-up promises & then when you hand over your cash you will simply be left to find out the hard way that the whole thing doesn’t really work as promised.

You see when you hand over your cash (which I don’t recommend doing if you haven’t already) you’ll simply be left to find out that all you get access to is 15 “done-for-you” basic webpages.

The idea is that you’ll then promote these pages online, capture people’s email addresses & then send them emails promoting the Millionaire Biz Pro system.

Here is the proof of that taken from the disclaimer at the very bottom of their sales page:

But there are some immediate problems here…

The first problem is that in order to capture email addresses you will need to purchase additional “recommended” software which starts at a cost of around $19 per month (the cheapest option).

The second problem is that even if you purchase the additional software you still are not guaranteed to see any success from the system because your success is entirely dependant on your knowledge of online marketing.

Admittedly there is “some” online marketing training included in the Millionaire Biz Pro program but it’s extremely basic which means if you’re not already an online marketing expert you’ll find it very difficult to make any money.

And ultimately even if you are an expert marketer the way you’re making money is just by getting people to join Millionaire Biz Pro exactly like you did which means that there isn’t any real sort of product as such in place… It’s basically just a recruitment scheme.

Recruitment schemes are illegal, so that’s certainly not good news…

Then There’s The Upsells

Yep, that’s right… Upsells – something I hate (and I’m sure you do too).

The $47 that you’re led to believe will get you access to everything inside of Millionaire Biz Pro doesn’t, instead it basically just gets you through the doors so-to-speak & then you’re bombarded with additional upsells on the inside.

Buy this, buy that, “you need all of these additional things for your success”… That’s basically what you’re told. It just feels like a never-ending journey of spending & it doesn’t matter how many of the upsells you buy, your chances of success will remain the same, slim.

And It Hasn’t Really Been Featured on The News

As mentioned towards the beginning of this review the Millionaire Biz Pro program states on its website that it’s been featured on various TV news shows such as Fox News, MSNBC, USA Today & CNN…

The claim of being featured on the news is entirely fake & the creator has simply put it on the website to try to trick you into thinking that it might actually be legitimate (which as you now know, it’s not).

He (or she), whoever is behind Millionaire Biz Pro is basically hoping that you don’t research it because if you do, you’ll quickly find out that the system has never been featured on any of those TV news shows.

My Verdict – Is Millionaire Biz Pro a Scam?

Well here’s the deal, yes you do get access to “some” training inside of Millionaire Biz Pro which teaches you the very basics of making money online, but basically the system/program (whatever you want to call it) is nowhere near as great as it’s made out to be.

In reality, the whole thing has just been super hyped-up so that the person behind it can trick people into signing up & handing over their cash so that he (or she) can earn at their expense… It’s not really set out to help people make money like it claims to be.

And for that reason (because it’s misleading & doesn’t deliver on its promises) I am going to be saying that yes, in my opinion, it is a scam as it’s going to be much more likely that you’ll just lose money, not make it.

The slightly positive news though is that it’s being sold through a third-party network named ClickBetter so if you’ve already purchased it & contact them directly they may refund you for your purchase.

But if you haven’t already spent money on Millionaire Biz Pro, good, instead I’d recommend you just stick with a program that’s actually proven to help people achieve success like Commission Academy.

Or alternatively, just check out the other legitimate methods on my top picks page here.

But whatever you decide to do I just sincerely hope that my review of Millionaire Biz Pro here has given you a good insight into how it really works & I hope it has helped you to save your cash.