Next Job At Home is a website that claims to connect you with various work from jobs & opportunities. You’re led to believe that all of the work from home jobs offered via their site are free to find, fast to start & easy to do… 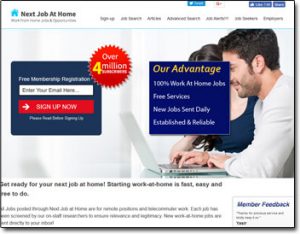 They even claim that all of the jobs listed on their site are screened by their researchers, but there are a few things that might make you a bit sceptical about the whole site… So what’s the deal, is it actually legit or will Next Job At Home scam you?

Thankfully you’ve landed in exactly the right place to find out because I’ve done the digging & in this review, I’m going to be uncovering everything you need to know, including how it all really works & whether or not there’s actually any real jobs on the site.

What Is Next Job At Home?

Next Job At Home claims to be a directory of work from home jobs, and to an extent it kind of is – but as you’ll soon see in this review there’s a few problems with the site & in reality it’s not quite as great as you’re led to believe.

To get access to the so-called “jobs” you can run a search through the site & browse them manually, but overall you’ll be pushed into signing up to their “job alerts” newsletter which will send new jobs directly to your inbox.

And the worrying thing I’ll point out from the start is the company actually lists no contact details whatsoever. Despite claiming to be “established & reliable”, as a visitor you have absolutely no idea who’s running the show & no ability to get in touch with them should you have any issues…

Anyway as you’ll see in just a moment I was right to be suspicious because the whole thing is NOT what it seems. Rather than being set out to help you find work as they claim, it looks to me like they’re more interested in tricking you into sign up to scams so that they can earn money at your expense.

Let me show you what I mean…

How Does Next Job At Home Work?

Okay so if it’s the first time you’ve come across anything like this then you might be led into thinking that Next Job At Home seems like a legitimate website – after all I’ll admit that it’s pretty professional looking.

However, after running a job search through the site I quickly discovered what’s really going on here.

Basically Next Job At Home just scrapes a website called ZipRecruiter which means it automatically pulls jobs from the ZipRecruiter website. So the first thing I’ll point out is that none of the jobs are screened as you’re initially led to believe.

All the Next Job At Home system does is search the ZipRecruiter website (a legitimate job site) for jobs containing the words “work from home” or something along those lines, and then it lists them within it’s search results.

This alone isn’t overly bad – though it’s worth pointing out that even though ZipRecruiter is a legitimate job site, quite a lot of the so-called “work from home” positions listed on there are actually fake.

You see if you take a look at the screenshot below you’ll notice that in among their listings they push “Sponsored Ads” – but these are not sponsored ads at all, these are scams the creator of Next Job At Home is affiliated with.

This means that if you click on that link & sign up to the system you’re redirected to, the creator of the Next Job At Home website will earn a commission at your expense – and that’s what he’s hoping for.

The particular link I’ve screen-shotted above actually takes you to a website named Paid To Send Email which is a big (and very costly) scam that I’ve already exposed on this blog before.

On top of that though the website is just totally littered with adverts for scams. Take a look at the image below for example:

That banner is found at the bottom of their website & if you click it you’ll be taken to a fake news article which is promoting a system named Automated Daily Income, another scam I’ve previously exposed on this blog.

Next Job At Home Complaints

I searched for customer reviews of Next Job At Home on the BBB website & I found that there were 4 customer complaints listed, all stating that they had money taking from their account after signing up for “jobs” via the site…

There is simply no way you should ever have to pay to access a legitimate job & the reason they had money taken from their accounts is because as we’ve outlined above what they were actually redirected to were scams.

Ripoff Report also brought some interesting things to light, with customers posting extremely bold complaints like this one:

Here is a quote from further within the same review:

The jobs from them are supposed to be screened by them and legitimate, that’s why you are giving them a fee. All of their jobs are bogus in one way or another and not a legitimate job where “no fee” is required like they say.

This just once again highlights the fact that Next Job At Home cannot be trusted whatsoever.

Is Next Job At Home a Scam?

Well Next Job At Home in itself is not a scam, they’ve cleverly covered their butts on that front – but it’s clear to me that the website has been designed to push you through into 3rd party scams so that the creator can earn money at your expense as an affiliate.

What I’ll point out again though is that even several of the jobs listed on ZipRecruiter are also scams, so you should tread very carefully on there too. I’d advise you simply check out my list of legitimate ways to make money online here instead.

But overall it’s safe to say I won’t be recommending the Next Job At Home website to you because ultimately I don’t feel like it provides you with any real value & it will likely just see you losing money rather than finding a legitimate work from home job.

Hopefully though my review helped you avoid it – and hopefully it gave you the insight into it that you were looking for. If you do happen to have any further questions or comments about it though then don’t hesitate to leave them below.

8 thoughts on “Next Job At Home – Scam Exposed? Read My Review Before Signing Up For Jobs!”