The Paid To Send Email website promises to give you access to some sort of “secret” method that will see you earning thousands of dollars online just by simply sending a few emails each day. 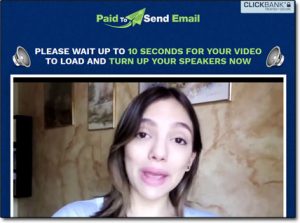 The video promoting the system starts out with lot’s of alleged members sharing their results, but you’re probably a bit sceptical & I don’t blame you… So what’s the deal?

Is it actually legit or is Paid To Send Emails a scam that’s just going to leave you disappointed?

Thankfully you’ve landed in exactly the right place to find out because I’ve taken a closer look into this system & in this review, I’ll be uncovering literally everything there is you need to know, including how it all works & whether or not you can really make money with it.

What Is Paid To Send Email?

As I very briefly touched on above the Paid To Send Email system is a program that can supposedly provide you with a way to earn lot’s of money from home by simply sending emails… And whilst this is half true in the sense that you can actually make money by sending emails, the way the Paid To Send Email system presents the opportunity to you is very misleading & if you buy into it you’ll likely find yourself disappointed.

You see the Paid To Send Emails website makes the whole thing sound really easy. You’re almost led to believe that you can simply sign up, start sending emails as instructed & begin making money right away only in reality that couldn’t be further from the truth.

As I mentioned above it is actually possible to make money by sending emails – it’s called email marketing it’s actually one of the ways I personally make money online, but it’s not as simple as just sending an email and getting paid per email like the Paid To Send Email system makes out.

How Do You Make Money Sending Emails?

What I’ll do here is firstly explain how you really make money by sending emails & then I’ll show you how the Paid To Send Emails system is merely misleading you to make the creator rich at your expense.

Basically to make money by sending emails the first thing you are going to do is find a way to get email subscribers. It’s against the law to send unsolicited emails to people (if you’re promoting something) so the people you’re emailing will have had to physically “subscribe” to your email list before you can send them emails.

If you send emails to random people it’s known as spam and it’s an offence according to the CAN-SPAM Act. I don’t need to tell you that, you’ll likely know yourself that you’re going to get into trouble if you’re just sending people spam emails.

Anyway, an example way to get email subscribers is having your own website & giving people the opportunity to subscribe. Take this blog, for example, I write about money-making opportunities & I give people the option to subscribe if they want to get the best legitimate ways to make money delivered to their inbox.

Then once you have people subscribed to you you’ll be able to send them emails. This means that if you found a great new product or service, you could recommend it to the people that are subscribed to your email list.

Therefore you’re essentially making money by sending emails – and if you’re interested you can actually check out my full guide to making money from an email list here. Though FYI that guides more useful to people who already have an email list.

If you don’t have an email list yet or don’t have a way to get subscribers then you should check out Commission Academy – it’s one of the best places for you to learn how to get started & you’ll get pretty much everything you need there too.

Email marketing as a whole is a very powerful way to make money because once your email list is large enough you could reach tens of thousands of people with the click of a button. I’ve seen some people making hundreds of thousands from a single email they sent out. Obviously they had huge email lists but still, it just highlights the true potential that’s involved with it all.

Anyway, back onto the Paid To Send Email system…

How Does Paid To Send Email Work?

Now that you have a better understanding of how you really make money by sending emails, hopefully, you’ll be able to see just how misleading the Paid To Send Email system is when I explain it to you…

You see as I mentioned at the start of this review the Paid To Send Email system makes out as if you’re just going to be able to sign up & start making money right away. They don’t explain anything about having to get subscribers, join affiliate programs or anything like that.

You’re actually pretty much led to believe that you’re going to be getting access to some sort of “job” through which you’ll be getting paid a fixed amount for each email you send but that’s far from the truth.

Ultimately if you hand over your money & buy into the Paid To Send Email program all you’re going to get is some training that goes over the things I mentioned above in the previous section of this review.

It will give you a basic insight into how email marketing works & that will be it… The program won’t help you make thousands of dollars per day like you’re led to believe, in my opinion, it’ll just leave you disappointed.

And if you think $27 is the true cost then think again. After buying into the Paid To Send Email system you’d be forced to watch several other videos that try & upsell you to higher-priced products inside of the program, so essentially you’re not even getting the full deal for $27… That’s just to get you in, then once you’re in that’s when they’ll try & squeeze more cash out of you.

Is Paid To Send Email a Scam?

The answer to that is no, it’s not a scam – but it’s not a program I’m going to be recommending either due to the fact that it’s very misleading & that I feel it’s been purely designed to make the creator wealthy at your expense.

Now I appreciate you might be confused when I say it’s not a scam despite what I’ve said above. The reason I say it’s not a scam is that essentially yes it is misleading, but you do get some training in return for your money… So it’s not like they’re totally just taking your money from you and giving you nothing at all (which in my opinion is the real definition of a scam).

Anyway, the slightly good news is that the program is being sold through a marketplace named ClickBank – this means that if you’ve bought into it & don’t like what you’ve received you have a pretty good chance of getting your money back. Obviously there is no guarantee you will get it back but if you contact ClickBank directly they should be able to help you out.

To be honest though if you haven’t bought into it I’d just recommend totally dodging it because like I say the chances are that if you hand over your cash you’ll only end up finding yourself disappointed. Instead of signing up to Paid To Send Email check out my list of legitimate ways to make money online here.

Hopefully, my review helped you save some cash here & gave you the insight into this system that you were looking for, but if you happen to have any further comments or questions about it then don’t hesitate to leave them below.