Online Web Typing is a work-from-home website that claims to contain over 856 high paying typing & data-entry related positions. You’re led to believe that you can earn upwards of £20 per job & that you have the potential to earn as much as you like, with members supposedly averaging around £220 in earnings per day. 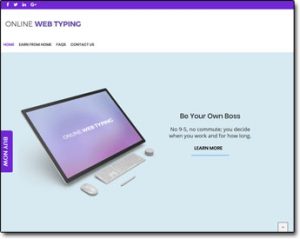 But obviously for such a simple thing like typing that seems to be an extremely bold income claim, so what’s the deal here?

Is it actually legit or is Online Web Typing a scam that’s just been designed to make the creators richer at your expense?

Thankfully you’ve landed in the right place to find out because I’ve taken a closer look to see what it’s all about & in this review, I’ll be uncovering everything you need to know, including most importantly whether or not you can really make money with them.

What Is Online Web Typing?

Online Web Typing basically poses as a directory of typing & data-entry related jobs. They lead you into believing that you can just sign up, browse the jobs & start earning almost right away…

They claim that you don’t need any skills (other than being able to type) and that you can get started with them even if you have no prior experience at doing these sorts of jobs. According to them, their website enables anybody to make money & for each job you complete you’ll see yourself earning between £20 & 25.

It almost seems like the dream work from home position, but don’t get your hopes up too soon…

Before you can get access to these “amazing” typing jobs you’re told that you have to pay a “small training fee of only £26” and this is where things begin to get very suspicious indeed.

All throughout the website, you’re sold on how easy the whole thing is, yet further down, you’re told that you’ll need to pay a training fee… Why would you need training on something if it’s supposedly so easy?

And furthermore why are you required to pay this upfront? Surely if these high paying jobs were legitimate then they could just take a percentage of your earnings – that would make more sense for everybody involved right?

How Does Online Web Typing Work?

Rather than going into any great detail on the actual opportunity at hand the website merely repeatedly lists reasons as to why you might want to work from home. It basically sells you in on a dream.

You’re told that you won’t have to do the daily commute, that you get to work when & where you want & so on…

The truth is though that the whole thing’s just a ploy. The reason the website works so hard so try & get you hyped up about the opportunity is that the creators of it just want to part you with your cash.

The website lures you in by promising you these amazing high paying opportunities, asks you to hand over your cash & then you’re merely left to find out that it doesn’t actually hold true on any of its promises.

After buying into the Online Web Typing program (which I don’t recommend you do) you’ll find out that there are no writing or data-entry jobs paying £20 to £25 as promised. Instead, you’ll just be referred to websites like Freelancer & Freedom With Writing where you’re told you can sign up to make money as a writer.

I’ll admit it’s true that you can make money through some of these sites – but it’s nowhere near like they make out, and you also didn’t need to pay for that information either since those websites are actually free to access.

Basically you’re led to believe that after buying into Online Web Typing that they’ll sort everything out & connect you with the jobs. All you expect to do is write or enter data and get paid… But nope, instead, you’ll just be referred to sites where you’ll have to battle for jobs yourself, be unlikely to get them due to the sheer amount of competition & then earn very small amounts from any that you do successfully manage to land.

You certainly won’t be earning anywhere near the promised £220 per day if you join this program… In fact, you’d be lucky to make a penny.

And notice how they claim they’ll refund your fee after your first job? Well yeah, that’s another lie too.

Is Online Web Typing a Scam?

Yes, it is, the Online Web Typing program is just a typical get-rich-quick style scam. There is absolutely no way you should ever need to pay to access a job & if something asks you to then there is something suspicious going on.

Basically this program just works in a similar way to the Legit Flex Jobs Academy program I exposed before – it sells you on the dream of being able to easily earn a lot of cash from home, asks you for money to begin & then fails to deliver on its promises.

Once you actually get access into the Online Web Typing program you will just be left to find out that there are no “jobs” as promised & that instead what you’ve actually bought is training, which is not what you wanted.

So overall it’s safe to say I won’t be recommending this program, instead, I’ll actually be doing the opposite & advising that you avoid it because the likelihood is if you hand over your cash you’ll only be disappointed.

Anyway, hopefully, this review provided you with the insight that you were looking for & helped you save some cash. If you do happen to have any further questions or comments don’t hesitate to leave them below.