The Profit Genesis 2.0 system (also known as the Profit Genesis Reloaded system) is a brand new online money-making system that promises to be able to generate it’s members profits upwards of $1,000 per day through some sort of “done-for-you” business model. 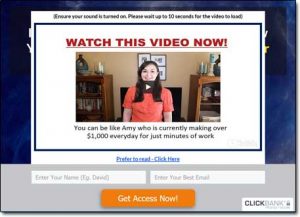 As a visitor to the site, you’re literally led to believe that you can just sign up, do around 15 minutes of work & begin making money right away…

But is it actually legit or is Profit Genesis 2.0 a scam that’ll just end up costing you money rather than helping you make it?

Well right from the off I’ll say that it sure sounds too good to be true, but thankfully you’ve landed in the right place to find out for real as I’ve taken a closer look into it & in this review, I’ll be uncovering the truth about how it all works… Including whether or not you can make any money with it.

What Is Profit Genesis 2.0?

The Profit Genesis 2.0 system has been put together by a guy named David Miller (or at least that’s what you’re told on the website anyway – more on that in a mo)… But as the name suggests it’s allegedly the “reloaded” version of its predecessor Profit Genesis.

Profit Genesis was a system launched last year in 2017 & it promised the exact same things as this new reloaded version… The problem is none of it held true, hence the so-called new “reloaded” version.

In this version, David Miller (the alleged founder) has apparently “fixed” the problems & now the system is supposedly foolproof. You’re said to be able to simply sign up, put in a few minutes work & begin making money right away… Which would be nice if it were true.

Sadly though it’s not quite true as you’ll see in a moment.

Oh no, it doesn’t involve any of that… Instead, you’re just told it’s going to enable you to “tap into a secret wealth source“…

Surprise surprise though the creator doesn’t touch on any details about the so-called “secret wealth source” and instead to find out more you’re pressured into handing over $37 of your hard earned cash.

But stop! Don’t do it! I can tell you right from the off that the Profit Genesis 2.0 system doesn’t work as promised – in fact it’s nothing but a load of BS & David Miller the so-called creator isn’t even a real person.

Yup that’s right – take a look at the image below:

The photo of “David Miller” that’s supposed to be the creator of the system has actually just been pulled from a stock photo website – and if you view the details of the image on the Profit Genesis 2.0 site the filename of the image is “russell-hill-150×150.png“… So it looks like they were torn between which fake name to use, Russell Hill or David Miller.

But obviously I don’t expect you to just believe that it’s a scam because of the fact that a fake name/photo is being used – after all I appreciate that you might have been really hoping that this system was going to work for you.

How Does Profit Genesis 2.0 Work?

Like I mentioned in the previous section of this review the whole concept of the Profit Genesis 2.0 system is that you’ll be tapping into a “secret wealth source” and that you’ll be able to generate a passive income online with very little work.

With just a few minutes per day of effort, you’re told you’ll easily be able to make as much as $1,000 per day which might seem like a dream come true, but sadly that’s all it will remain – a dream.

Instead of getting access to an easy way to make money, all you’ll actually get access to is some extremely basic training on affiliate marketing – you know, the same stuff the Profit Genesis 2.0 system said it was NOT about. Guess what? They lied!

And whilst affiliate marketing itself is an excellent way to make money, the training provided via the Profit Genesis 2.0 system is so rubbish it won’t help you earn so much as a single penny. You’ll just be left feeling frustrated & disappointed.

If you really want to get started with affiliate marketing there are legitimate programs out there like Commission Academy – their training is proven, and they’ve helped thousands of newcomers find success. I’d actually highly recommend you do check that place out if you’re interested in making good money online as affiliate marketing is the exact same way I personally generate most of my own income online – it’s awesome.

But like I say the Profit Genesis Reloaded system is just total junk. Unlike legitimate places like Commission Academy they’re not really interested in helping you, they just want to trick you into signing up so that they can earn money at your expense. That’s why they require you pay before you get access to the method.

Let’s just step back for a second and think about the whole thing. Do you really think if the creators of the Profit Genesis 2.0 system had come up with a way to automatically generate people $1,000+ per day they would be selling access to it for just $37?

Heck no, of course they wouldn’t – nobody would!

They’ll also make it very difficult for those who do pursue to a refund to actually get one – in fact they’ll likely just ignore the request altogether.

The reason I know all this is because I’ve seen this exact type of scam launched before under various different names such as the Secret Income Club and the Click Cash Machine. They all promise similar things – easy riches, and they all fail to deliver.

Don’t Be Fooled By The Testimonials…

The one thing that often catches people out when it comes to these sorts of things are the testimonials. In the video you’re shown various “proof” videos from people who are supposedly profiting from the system…

But that’s exactly what the creators want!

They want you to just sign up and try it out because they know that the second they’ve got your cash it’ll be very difficult for you to get it back… And even though you’ve found out it doesn’t really work they’ll have still profited at your expense.

That’s why they’ve gone to the lengths of hiring paid actors to produce “real” testimonials for them. Take a look at the image below for example:

He also appeared in a “testimonial” for the My Traffic Business System (shown above) where he claimed he was making $397 per day from that too. As you can probably guess that system was another scam!

Well in terms of being a scam, that’s quite a tricky one – it depends how you define a scam. I mean ultimately the Profit Genesis 2.0 does not live up to any of its promises & there is no way you are going to make any of the large sums of money promised by going through this program alone…

But technically you do actually get something in return for your money (even though it’s total junk) so it’s kinda hard to call it a flat-out scam as such. I guess deceiving & misleading would be better words to describe this system.

The truth is it’s clear for me to see that the whole thing has been built purely to make its creators wealthy at your expense. They don’t really care about helping you find success at all – they just want to take your money. For that reason, it’s safe to say I won’t be recommending it.

Like I mentioned earlier in this review though the truth is that you can actually make good money with affiliate marketing – you just need a legitimate platform like Commission Academy to help you get started, not some BS one like the Profit Genesis 2.0 system.

And even if affiliate marketing isn’t your thing don’t worry all’s still not lost because there are several more ways you can make good money online.

But whatever you decide to do I just hope my review here has given you a good insight into how this system actually works & hopefully it has helped you make a better decision as to whether or not you really want to join. If you do still have any further questions or comments though then don’t hesitate to leave them below & I’ll get back to you as soon as I can.