The Secret Millionaires system (found at secretmillionaires.net) is a system that claims it can enable you to easily begin generating an income of around $2,740 per day online, even if you’ve never actually made a single penny online before. 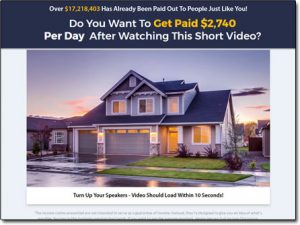 But I think you’ll agree that making $2,740 is a pretty bold claim since it’s an awful lot of money & being able to generate that kind of income so easily sounds very suspicious which is most likely the reason behind all the Secret Millionaires scam rumours that have started circulating online.

Is it actually legit? Or is the Secret Millionaires system a scam that’s just going to part you with your cash?

I’ve taken a closer look & in this review, I’m sharing what I found.

What Is The Secret Millionaires System?

However, in reality, that’s not the case, the Secret Millionaires system is actually just a sales funnel that’s been put together to get you to buy into an entirely different business opportunity named Digital Altitude.

It’s, therefore, safe to say the website is pretty misleading but this alone doesn’t really make it a scam because the program that you’re being sold into (Digital Altitude) is actually technically legit, though personally I don’t recommend it & you can find out why in my full review of it here.

Basically to cut a long story short it’s a very expensive program & a high number of the people who join the program end up losing money as opposed to making money – even though technically yes, if you work hard you can actually make money with it… but I personally came to the conclusion that there were better alternatives available.

So What Is Digital Altitude?

Basically, Digital Altitude is a program that teaches people how to make money online, but on top of that, it provides you with the opportunity to resell the Digital Altitude program onto other people & earn money by doing so.

However, as I mentioned earlier the products inside of Digital Altitude (which teach you how to make money) are very expensive because it’s what’s known as a high-ticket program. In order to make money through Digital Altitude, you’ll need to personally purchase the products yourself & this could set you back around as much as $50k if you really want to see the most out of the program.

And even if you do spend the full $50k there’s absolutely no guarantee that you’ll make money with it, and whilst you can potentially make money with it sadly the reality is that most people who join don’t make any money at all…

Which means by joining Digital Altitude you could potentially lose around $50k!

But I’m not going to lie Digital Altitude does offer quite a lucrative compensation plan and they’re able to do that because they’re able to pay out very large commissions by selling products at very high prices.

This means that if you work very hard at promoting Digital Altitude you could make quite a lot of money by reselling the products onto other people. Some of the members have actually made millions (but only a very, very small minority – and those that have, seem to all have had previous experience at online marketing).

Overall in my opinion the risk with this program is simply far greater than the potential reward.

But Here’s The Real Problem…

The real problem here with high-ticket (expensive) opportunities like Digital Altitude is that many of the affiliates who are promoting it go on to create their own 3rd party sales funnels just like the Secret Millionaires system & these sales funnels tend to be very hyped-up because the affiliates that have created them just want to make as much money as possible.

So basically by going through the Secret Millionaires website you’re kind of being sold into Digital Altitude on a pack of lies as the website makes things seem an awful lot easier than they will be & it doesn’t mention anywhere about the total cost that’s actually involved.

After buying in for the initial fee of $37 you’ll realize that you only have access to the lowest level inside the program & that to actually make any decent money you’ll need to keep pumping more cash into the program – so chances are if you buy into the program after watching the Secret Millionaires video you’ll probably find yourself very disappointed.

But this isn’t actually the first 3rd party sales funnel to launch, I’ve seen several others such as the Internet Millionaire Coach system, the My Online ATM system & a whole bunch more. They all hype things up way too much & as a result, I haven’t been able to recommend a single one of them to my readers.

Is The Secret Millionaires System a Scam?

This means that after handing over your money you will most likely find yourself disappointed at the product you actually receive because it won’t generate you “autopilot commissions” like you’re led to believe & chances are nor will it see you making millions.

On top of that after paying the initial $37 you’ll simply keep being asked to pump more & more money into the program & you, as a result, you could see yourself spending in excess of $50k before you even manage to get the ball rolling which in my opinion is just a crazy amount of money to throw at something like this.

Therefore based on all those things I will be giving this program a thumbs down & I won’t be recommending it because to be totally honest I just simply don’t think you’d find any real value in it whatsoever so it’s best to be avoided.