The Internet Millionaire Coach system (found at internetmillionairecoach.net) claims that it can provide you with everything you need to become an internet millionaire yourself even if you’ve no prior experience at working online. 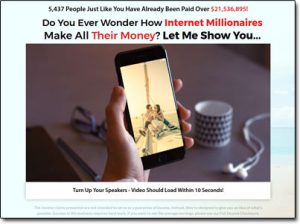 You’re led to believe that you can simply buy into the system and start making money almost right away with very little effort, but is it actually legit? Or is Internet Millionaire Coach a scam?

I’ve taken a closer look & in this review of the Internet Millionaire Coach system, I’m going to be sharing my findings (meaning you definitely need to read this review if you’re thinking about joining).

How Does Internet Millionaire Coach Work?

Upon landing on the Internet Millionaire Coach website I immediately assumed that it was just going to be some sort of get-rich-quick type scam because it shows all the typical characteristics (bold income claims, scarcity tactics etc)…

However, upon closer inspection I discovered that the Internet Millionaire Coach system isn’t actually a system at all – it’s just a sales page that’s been put together by an affiliate of the Digital Altitude business opportunity & ultimately when you hand over your money you’ll actually be buying into Digital Altitude NOT the Internet Millionaire Coach program like you’re led to believe.

In my opinion, this is quite misleading but it’s actually not the first thing I’ve seen doing this – I’ve actually seen quite a few similar websites launch which all have the same intention of getting you to buy into Digital Altitude.

The most heavily promoted ones are the Aspire Today & The Freedom Secret websites which you might have actually already seen. Despite them being slightly different they both act in a similar way to the Internet Millionaire Coach system in that they’ve been designed purely to get you to buy into Digital Altitude.

So Why Are Affiliates Creating These Pages?

Basically, Digital Altitude is what’s known as a high-ticket program which means they sell expensive products, and this attracts quite a lot of the industries top affiliates because this generally means that they can earn quite large commissions by promoting the products within the Digital Altitude program.

Because of these high commissions, many of the top affiliates are willing to go all-out to try and increase their sales & one of the ways they do this is by creating their own custom sales funnels so that they can promote a unique sales page rather than promoting the default company ones that all the other affiliates are using.

It’s clearly an effective technique for them because I’ve seen almost 10-20 different sales pages being launched over the past couple of weeks alone, 2 of which I mentioned above & another one I saw launch yesterday or the day before was the 7 Figure Breakthrough system so it’s obvious these things are helping them boost their sales.

What This Means For You…

Digital Altitude, the program these systems (like the Internet Millionaire Coach system) are selling you into is technically a legit program, although in my Digital Altitude review I actually decided not to recommend it because I believe there are better alternatives available.

However, the problem is that these 3rd party sales funnels can often be very misleading, and I think the Internet Millionaire Coach website is a prime example because it’s clearly overly hyped-up & makes you think that you can begin making money quickly & easily which simply isn’t true.

Yes, you can potentially make money as a member of Digital Altitude (which is a program that teaches you how to make money) but ultimately this will require a heavy amount of investment and a lot of time & effort.

You can’t just expect to sign up to Digital Altitude & start making money without doing anything like you’re led to believe you can by the Internet Millionaires Coach sales page – the creator of that website is basically just saying anything they can to get you to hand over your cash which will most likely result in you being disappointed when you actually get access to Digital Altitude.

And when I mentioned that it will require a heavy amount of investment I really do mean it – to get the most out of the Digital Altitude program & see yourself being eligible to earn the big commissions promoted by the Internet Millionaire Coach system you will need to invest around $50k to get to the highest level in the program (which is named Apex).

That’s one of the main reasons I chose not to recommend it because I personally believe that investing that kind of cash in an online business before you can even get the ball rolling is just way too risky.

Is Internet Millionaire Coach a Scam?

The answer to this is yes & no really, but I know one thing for sure & that’s that I won’t be recommending this program to you because in my opinion due to the amount of investment required it’s just far too risky especially if you’re brand new to online marketing & making money online as a whole.

The reason I say yes & no is because whilst Digital Altitude (the program it’s selling you into) is technically legit, I feel that the Internet Millionaire Coach is selling you into that program on a complete pack of lies.

Well, I take that back, maybe not lies as such but essentially it’s just really hyping the opportunity up & making you think that you can just hand over some cash & start making money quickly & easily without really doing anything which just couldn’t be further from the truth.

You’ll sign up to Digital Altitude for the initial offering of $37 but then you’ll quickly find out that this only gets you access to the very bottom entry level of the business opportunity & that in order to make money you’ll need to spend a total of around $50k which in my opinion is just crazy.

Yes, it’s legit in the sense that you could potentially make money if you work hard but I think you’ll agree it’s a VERY expensive opportunity – that’s why I chose not to recommend it in my full review here.

To be honest I’m actually just going to come out & say that yes I do believe the Internet Millionaire Coach is a scam because ultimately it’s tricking you to part you with your cash & I do strongly feel that if you buy into the program you would find yourself disappointed so on that note overall it’s going to be getting a thumbs down from me & as you can guess I won’t be recommending it.