The Semantic Investment App, alternatively known as just the Semantic App promises to be a life-changing product that will be able to generate you as much as $3,182 per day through automated online trades. 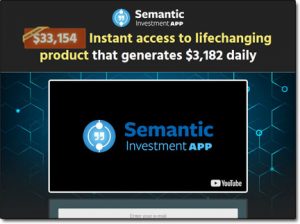 You’re led to believe that all you need to do is sign up, make a deposit & run the app to begin profiting – but is it actually legit, or is the Semantic Investment App a scam that’ll just end up leaving you with less cash than you started out with?

Thankfully you’ve landed in the right place to find out because I’ve taken a closer look at this whole Semantic App & in this review, I’ll be uncovering everything there is that you need to know about it, including how it really works & whether or not you can really make any money with it.

What Is The Semantic Investment App?

The Semantic Investment App claims to be an automated Forex trading tool that can allegedly see you profiting on complete auto-pilot. As I mentioned above you’re led to believe that you can simply sign up, deposit, switch the app on & start making money…

The creator claims that the software has an overall win rate of 92% & that this can see you generating guaranteed profits of $3,182 per day. He (or she) whoever is behind it claims that it does this by analysing news articles & making relevant trades extremely quickly – in just one second to be precise.

But is all this just nonsense? Sadly yes it is.

The Semantic Investment App doesn’t deliver on any of its claims & the reason for that is because it’s actually not legitimate at all. The Semantic App is merely yet another binary options scam out to steal your money.

Though I don’t expect you to take my word for that, so instead let me show you exactly how it works (or should I say doesn’t work)…

How Does The Semantic App Work?

Well, it certainly doesn’t work as promised – instead of generating you guaranteed profits of $3,182 per day as claimed this system will actually see you making nothing but losses – on purpose.

You see if you try & sign up to the Semantic App you’ll realize that before you can get access to the app you’re forced to make a deposit of at least $250 via their “recommended” binary options broker.

Then, after depositing you’ll get access to the app as promised – and the app will indeed make automated trades for you, but you’ll be left to find out the hard way that none of them will be profitable.

This is where you might think you’ll be able to just get your money back & cut your losses but sadly it won’t be quite so easy. The broker(s) affiliated with the Semantic App are actually unlicensed rogues, meaning once they’ve got your money they ain’t gonna let you get it back.

The whole thing is just a scam to part you of your cash, and the Semantic Investment App system is just a ploy that’s been put together to encourage you to deposit with the broker… Because without a so-called “proven method” you’d be unlikely to deposit (since you’d know you’d likely lose).

The Semantic App has basically just been designed to lull you into a false sense of security, making you think you’ll be able to profit so that you’ll at least want to go ahead & “try it out”… Then boom, once your money’s in it’s as good as gone… You’ve been scammed.

The reason I know so much about these scams is that I’ve exposed literally hundreds of them on this blog over the years, in fact just yesterday I exposed a similar one named Crytpo Trade Book which works in the exact same way.

A Few Things You Should Know…

Firstly, you should know that binary options brokers only make money when you LOSE money. This means that there is no way a broker would partner themselves with a program that could generate you guaranteed profits – it wouldn’t make sense for them, it would put them out of business.

So if an automated trading program “recommends” a broker to you, know that it is likely a scam. It has likely either been set up by the brokers themselves to scam you or by somebody affiliated with them who is getting paid commissions to get you to deposit (like in this instance).

Secondly, scroll straight to the bottom of these websites and look for a license number. By law, as these companies are working within the financial industry they MUST be licensed & they must display the details of their license on their website – it’s a serious offence not too… So if you see no license, don’t deposit – it’s not safe.

Thirdly & most importantly sometimes you’ve just got to step back & ask yourself does it sound too good to be true? You know how the saying goes, if it does then it probably is. Think about it for a moment, if a system could really generate people $3,182 per day without them having to do anything then why isn’t everybody doing it? Such a system would send the world into crisis.

Is The Semantic Investment App a Scam?

Yes, it is, the Semantic App is definitely a scam. It tricks you into believing that you’ll be able to make profits of up to $3,182 per day through automated Forex trading but the truth is it will see you making nothing but losses.

The whole system is just a ploy & it’s merely been put together so trick you into depositing with the “recommended” broker so that the creator of the system can earn a commission at your expense.

Sadly the broker is on the whole thing too & if you do happen to try it out (which I obviously don’t recommend) then after discovering that it doesn’t work as promised you’ll struggle to get any of your money back.

So overall I am going to be advising that you stay away from this program because it’s nothing but bad news. There are legitimate programs, like this one for example where you can learn how to really make money online – but know that it will take a little bit of work. Nothing is going to make you money on autopilot like the Semantic Investment App makes out it will.

Anyway with all that being said if you happen to have any further comments or questions please don’t hesitate to leave them below, but I do sincerely hope you came to this review prior to investing & managed to keep a hold of your hard-earned cash.

2 thoughts on “Is The Semantic Investment App a Scam? My Honest Review Exposes It!”