The Computer Geeks website which has allegedly been put together by a lady named Karen Williams claims it can provide you with a way to easily earn a full-time income from home by simply posting links online. 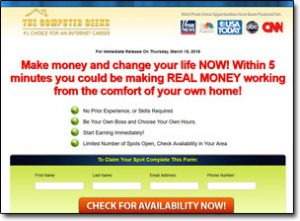 But is it actually legit or is The Computer Geeks a scam that’ll just end up costing you money rather than helping you make it?

Thankfully you’ve landed in the right place to find out because I decided to take a closer look into it all to see exactly how it all works & in this review I’ll be uncovering everything you need to know including whether or not you can really make any money with it.

What Is The Computer Geeks?

As I briefly touched on above The Computer Geeks program is something that’s allegedly been put together by a lady named Karen Williams & it claims that it can provide you with a way to easily generate a full-time income online through some sort of so-called “link posting job”.

Karen, the person who’s supposedly creating the whole thing leads you into believing that it’ll all be really easy & that you’ll be able to start making lot’s of money pretty much immediately after signing up…

But the problem is she’s lying – in fact Karen Williams isn’t even a real person, it’s just an alias to hide the true creator of the system… And the reason the true creator keeps themselves hidden is that the whole thing is nothing but a scam.

Easy – the reason I can so confidently tell you that it’s a scam right from the off is that I’ve actually seen this exact same thing launched several times before under various different names.

One if it’s previous names was Online Jobs Now & the reason it keeps changing names so frequently is to try & escape the negative reviews that people write about it so that the creators can keep scamming people.

How Does The Computer Geeks Work?

Well the truth is The Computer Geeks program doesn’t work – at least not as promised anyway. As I mentioned above the whole thing is literally just a scam that’s been designed to part you with your cash.

She states that the job is very flexible, that you don’t have to work many hours & that all you have to do is literally post some links for various companies around the web… Basically she makes it sound like the dream.

But of course in order to get access to the “job” you have to give her some money.

And guess what happens when you give her this money? You just get some junk training on affiliate marketing – I mean yes, affiliate marketing in itself is a legitimate way to make money… But the training providing to you through The Computer Geeks program is so bad it won’t see you getting anywhere at all…

I mean take a look at this… This is honestly about as in-depth as Karen gets:

She tells you the “formula” but doesn’t tell you anything else about how to actually get started with it… And heck, most people already know that formula – and if they didn’t a quick Google search would reveal it for free.

Then on top of that Karen will force you into scheduling an appointment with “one of her coaches” – who is basically just a salesperson, and this salesperson will call you up & try to get you to spend thousands on stuff that will allegedly “speed up the process”…

But obviously this is just part 2 of the scam – and if you end up investing the thousands you’ll just be left to find out the hard way that once again all you get provided with is some bogus training.

I know all about it because I purchased it myself via the Online Jobs Now site. All these guys do is keep the exact same website & same product but change the name, so The Computer Geeks will be selling exactly the same thing.

Like I said above though, affiliate marketing in itself is actually legit – in fact, it’s actually the same way I personally make money online & it’s a VERY good way to make money (providing you get the proper training)… But tee good news is that there are legitimate programs out there such as Commission Academy that can help you get started with it the right way.

But The Computer Geeks program is NOT legit.

Is The Computer Geeks a Scam?

As I mentioned above in this review I actually purchased into this exact program when it was named Online Jobs Now & I can tell you with 100% certainty that the whole thing is just a big scam.

The creator of it isn’t really named Karen Williams & it’s clear to me that the real creator of the program doesn’t really care about your success… He or she is just set out to make money at your expense.

So it comes without saying that the whole thing should definitely be avoided because if you buy into it (which I totally don’t recommend) then you’ll only find yourself disappointed at what you receive. Not only that – you’ll also end up being pushed into spending more money as the sales team call you up & attempt to part you with thousands more “behind the scenes”.

Like I already said – the truth is you can actually make good money through affiliate marketing (the method that The Computer Geeks program is loosely based around) but in order to do so you need a legitimate training program like Commission Academy, not a bogus one like this one that just gives you some rubbish low-quality training.

But anyway hopefully my review here helped you avoid it & helped you save some cash. If you do happen to have any questions or comments about it though then don’t hesitate to leave them below & I’ll do my best to get back to you as soon as I can.