According to the homepage of the Tiny Website System through their program or “system” as they call it you can learn how to quickly & easily begin generating around $160 to $440 per day just by giving away free stuff online. 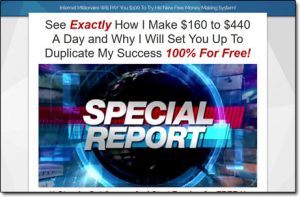 They even claim that you can get started with their method completely free but as you’ve probably found out that’s not quite as true as they claim.

So, what’s the deal? Is it actually legit or is the Tiny Website System a scam that’s just set out to part you with your cash?

Thankfully you’ve landed in the right place to find out the answer to that question because in this review I’m going to be uncovering everything there is you need to know & highlighting why you might actually just want to keep a hold of your cash instead.

Basically, the Tiny Website System is an online money-making program that claims to provide its members with done-for-you profitable websites in return for a “small” fee – however, the truth is it’s actually just a re-hash of an old get-rich-quick style scam named Profit With Jack.

It was actually pretty quick & easy for me to realize that it was just a relaunch of Profit With Jack, but not because the websites were almost identical (which they are) it was actually because they forgot to change the name of their website at the top! (doh!)… 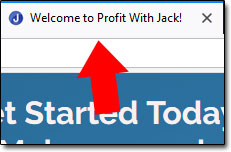 They also forgot to change the text at the bottom of their page too because that still reads “Copyright 2017 Profit With Jack” but to be honest that doesn’t matter you get the idea – the moral here is that this program is just an old scam relaunched under a different name in an attempt to once again part even more people with their cash.

Well obviously the program itself doesn’t work in the sense that you won’t make any money as a result of buying into it & trying it out, but ultimately the concept behind the scam here is pretty simple.

Basically, they’re just leading you into a false sense of security to try & get you to hand over your cash – this is very typical & I’ve reviewed many similar scams before such as My Online Franchise & Simple Wealth Creators…

This particular program even claims that you can get a 60-day money-back guarantee but naturally they prey on the fact that most people will just buy into the program & disregard it. Those that do decide to try & claim their funds back through the money-back guarantee will likely find it to be a laborious process – basically whilst these guys offer a so-called guarantee they will do their best to keep a hold of your cash.

The Lack of Automation

The whole concept with the Tiny Website System is that you can simply sign up & get provided with some sort of done-for-you automated websites that will begin to make you money without you having to do anything – only this couldn’t be further from the truth.

As mentioned above they are just trying to make you think that it will be really easy so that you will hand over your money. Once you actually get access to the program you will find out that in order to make money you will be required to promote their “capture pages” which basically sell various similar make-money related programs onto other people.

So to cut it short after signing up to the Tiny Website System you will be basically be selling similar systems onto other people in order to earn commissions. There is no “automation” as they make out.

And whilst yes, I appreciate that you could potentially make money the likelihood of you actually doing so is next to none because the training provided as part of the program is very poor quality.

You might share them on social media but the chances are that will just get your account into bother – to actually make money you’ll need to use tactics like SEO or paid advertising (something you can learn for free through Commission Academy).

I realize that I’ve cut this review quite short but that’s because it’s blatantly obvious to me (and should be to you by now) that the Tiny Website System is simply not a legitimate program – it’s just a scam that’s been designed with the sole intention of parting internet marketing newbies with their cash by promising them a quick & easy buck.

Yes, it’s possible to make money online but the TWS program is not the best place to start – in my opinion, if you’re new to internet marketing & are wanting to learn how to get started you should take a look into Commission Academy instead.

That is a website which will teach you the REAL ways that you can make money online rather than just some hyped-up mumbo jumbo that’s just selling into some sort of bogus training course to make the creator rich at your expense.

Think about it, if it were so easy to make money online as the Tiny Website System makes out then everybody would be doing it (and chances are you’d be hearing about the program via the news & not via some link in a spam email).

The reality is that if you actually want to make the kind of income online that this system promises then you’ll need to put in the work to make it happen – just like you would if you were to start a business offline… Ultimately the internet is no different (it just provides you with a way to get started without spending anywhere near as much money).

If you’re not willing to put in the work then yes you can still make a little bit of money through paid surveys or something like that instead but it certainly won’t be life-changing in the slightest. You get out what you put in – no shortcuts (sadly).