USI Tech claims to provide its members with an automated Bitcoin trading platform that can supposedly earn them whopping daily profits of around 1% (which is huge in the world of investing) without them actually having to do anything. 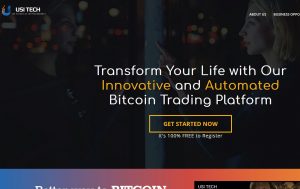 So apparently all you need to do is invest into the program & you can allegedly begin seeing a return on your funds the very next day after joining – but is it actually legit or is USI Tech a scam?

I’ve taken a closer look & in this USI Tech review, I’m going to be sharing my findings.

What Is USI Tech?

As I briefly touched on above USI Tech claims to provide an automated Bitcoins trading platform that can supposedly (in their own words) help you “grow your Bitcoins daily”.

To be honest right from the off I’m going to say that this sounds like a classic cryptocurrency Ponzi scheme in which members are being paid out using the funds coming in from new members that are investing because the ROI’s promised by USI Tech are extremely high and I don’t believe there’s any way you could promise such high fixed returns.

If that is the case as I suspect it is then it would be a completely unsustainable & not to mention illegal business model.

Of course, the website claims that the money being paid out is coming from their “automated trading system” which trades your Bitcoins on the Forex market but ultimately is something that can’t be proven.

Other programs I’ve come across before like the BitClub Network & BitConnect also made similar claims about how the money was being generated but they were found out to be Ponzi schemes & I suspect that is potentially the case here too even despite the USI Tech website coming across as looking fairly professional.

So basically what I am saying is that you should definitely tread carefully with this opportunity because if it is a Ponzi scheme as I suspect then there is a VERY high chance of you losing all the money that you invest & for that reason I would personally never recommend an opportunity that involves both investing & recruiting like USI Tech does because the risk of it being a Ponzi scheme, in my opinion, is far too great.

How Does USI Tech Work?

The idea is that you invest Bitcoins into USI Tech & that they then invest your coins using their automated trading system & generate you a guaranteed fix return of 1% daily by making Forex trades.

However, making such bold claims is in my opinion just outrageous because that would mean if you were to invest £10,000 with the company you would be earning £100 a day which might sound like a great deal off the bat but in terms of investments that is an absolutely insane ROI & it would be extremely rare for any legitimate means of investing to provide results even close to that.

And you know what they say about that? If it sounds too good to be true then it probably is.

The Truth About USI Tech…

After taking a much closer look at their website I can confirm in this USI Tech review that the company is indeed operating a Ponzi scheme because based on my experience of coming across similar Ponzi’s this company shows all the telltale signs.

The one major red flag about USI Tech is that the company provides no contact information whatsoever, and companies that keep details of themselves hidden are generally not legitimate – especially when it comes to financial opportunities because financial companies are required by law to make their details easily accessible to their users so any legit company would do exactly that.

On top of that USI Tech claims to have been operating for over 8 years but the truth is that according to the Web Archive the company was actually just founded in the middle of 2016 which is only slightly over a year ago.

It’s obvious to me that the company has just launched jumping on the back of the hype surrounding cryptocurrency at the moment in an attempt to trick newbies who think the opportunity could potentially be legit into parting with their cash.

Yes, you could potentially make money through the opportunity I don’t doubt that but similarly, you could also be the person that invests as the company is drying up which means instead of making money you will just end up losing everything which is why I said above that the risk is simply far too great.

Is USI Tech a Scam?

Yes, it is, there’s no way in my opinion that USI Tech is a legitimate company because the returns promised by them are just way too high & there’s no way a legitimate investment program could promise such outrageous returns which means there’s definitely something untoward going on (aka the fact that it’s a Ponzi scheme).

I feel that as I mentioned above USI Tech has just launched to jump on the back of the hype surrounding the increase of Bitcoin & is hoping to take advantage of newbies who might think that the USI Tech opportunity is actually legitimate (which it’s not).

The program might make some people money but ultimately it’s been set up to make the creators wealthy at the expense of others because these schemes will inevitably collapse & as a result people will inevitably also lose money – it’s just a matter of time & sadly there’s no telling when that time is, it could be now for all we know which means YOU could be the person that loses money.

I can see how these opportunities can lure people in because it’s always easy to get hooked on the promise of easy money but realistically you need to step back & look at what’s happening. If it were really possible to make so much money with such ease then everybody would be doing it, there has to be a catch & of course, there is, the catch is that it’s a scam through which there’s a very high chance of you losing money.

Therefore overall I certainly won’t be recommending this opportunity & I’ll be giving it a big thumbs down because it’s clearly nothing more than a get-rich-quick scam that will most likely disappear in a short period of time (and that’s most likely why the owners have decided to keep their details hidden so that they can just start up a new one afterwards under a different name).