Your Profit Team is a brand new biz system that claims to consist of a millionaire team who are allegedly partnering with new people & giving them the chance to “join the team” so that they can begin earning as much as $7,340 per week, even if they’re totally brand new… 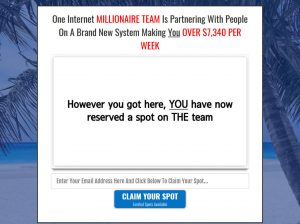 Thankfully you’ve landed in exactly the right place to find out the answers to those questions as I’ve taken a closer look into exactly how it all works & in this honest review I’ll be uncovering the TRUTH about what’s going on (and whether or not you can really make money with it).

What Is Your Profit Team?

Your Profit Team claims to be a millionaire team that have access to a proven system for generating an “amazing” work from home income & they claim that you can now join their team to begin earning as $7,340 per week…

Instead, you’re just pushed towards “claiming your spot” and handing over some money to find out more – but that’s an extremely common trick associated with a get-rich-quick scam.

Those types of scams are known to get you really hyped up & excited, then trick you into parting with your cash & just leave you disappointed at the other side when you find out the hard way it doesn’t work as promised.

I should know – I’ve exposed literally hundreds of them right here on this blog.

And I’m not gonna lie right from the off the Your Profit Team system looks a LOT like a scam. In fact, it looks very similar to the Insiders Cash Club scam that I exposed just yesterday. 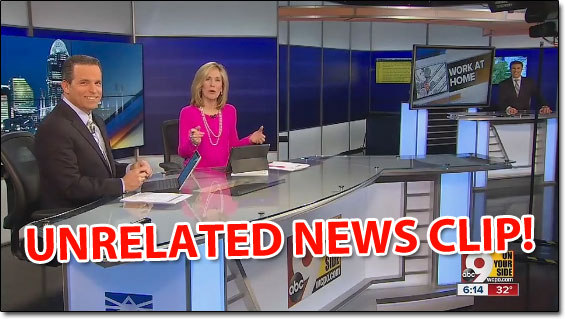 They do this to trick you into thinking that it might be legit – and as you guessed the use of random news clips like this to deceive you is also another tactic associated with scammers looking to get your cash.

So it’s not looking good at all for the Your Profit Team system from the off – but don’t worry I won’t brush it off so easily, after all, I always have an interest in things that might be able to make us money so keep on reading & I’ll dig further into how it all works…

How Does Your Profit Team Work?

Well like I said the Your Profit Team website itself doesn’t really explain much about how it actually works, other than stating that it allegedly consists of a “millionaire team” where everybody makes money together.

You’re told that not only will The Profit Team “hold your hand” and show you how to begin making money, but when another team member makes money you supposedly will too – so how’s that work?

Well, in short, it simply doesn’t work. Sorry to be the one to burst the bubble!

There is absolutely no way you’ll make anywhere near as much as $7,340 per week from this system & to be honest you’d be lucky to make a single dollar. The chances are you’ll just end up actually paying more than you ever manage to make back…

How do I know that? Simple – because after taking a closer look into it I found out that the whole thing basically revolves around people buying into the Your Profit Team system & then promoting it onto others.

Not only does this sound an awful lot like an MLM pyramid scheme, but the training inside of the system which you get access to in the member’s area is absolutely rubbish… Meaning if you don’t already know how to market things properly online then you won’t find any success with the Your Profit Team system at all.

In reality, the only people making good money from it are the creators (and the affiliates suckering people into it – telling people that it actually works so they can earn themselves a commission).

Your Profit Team should be avoided for sure because it is nothing but bad news – plus there is no “millionaire team” at all like you’re told there is, that’s just another gimmick to trick you into signing up.

In fact, the truth is that the whole thing is pretty much built upon gimmicks because next to nothing you’re told is actually true – and if you do hand over your cash you will definitely be disappointed.

Even The Cost Is A Lie!

With a price of $57 you might have looked at the Your Profit Team system, been sceptical about it, but thought “what the heck, I’ll try it out anyway“… Maybe it works after all? Or maybe you haven’t done that but you’re thinking of still trying it out anyway despite my review…

Well let me tell you that $57 is not the true price of the program – that’s basically just a “teaser” price to get you inside (and to get your card details so they can use 1-click billing for the upsells).

From there, after handing over your cash to get inside (which I don’t recommend doing) you’ll be subjected to further sales pages where you’ll be asked to hand over hundreds more dollars…

How do I know this?

How could the creators of Your Profit Team pay out $340 to the people that are promoting it if they’re only charging new members $57? The simple answer is that they couldn’t, which means they’re charging a LOT more for it…

And given that the affiliate page also states that the average commission percentage is around 65%, that means the program is likely costing members more in the region of a whopping $600!

That’s certainly a big jump from the “teaser” rate of $57 (which they pretend is the full cost).

Is Your Profit Team a Scam?

Well whilst some might say it’s not technically a scam since you do actually get access to some training (even though it’s really poor quality) in my opinion it is a scam because it’s very misleading & deceitful.

I mean as far as I’m concerned what you’re provided with is not what you are expecting, because you’re expecting access to a “team” and an easy way to make lots of money which is NOT what you get after handing over your cash.

So with that being said, I feel that the whole thing has just been set up to make the creators wealthy at your expense, and that’s why they’ve put so many tricks in place to get you to part with your money.

Therefore overall there’s no way I’m going to be recommending Your Profit Team because ultimately I don’t feel it’ll help you at all. Plus if you really want to make good money online you could just join a legitimate platform like Wealthy Affiliate for free.

Or you could try out one of these many other free ways to make money online – basically, there is just no need whatsoever for you to hand over your cash to a bogus, hyped-up system like Your Profit Team. Hopefully, though you can see that for yourself now after reading this review.

If you do happen to have any further questions or comments though then please do feel free to leave them below & as always I’ll get back to you in the quickest time possible.