Welcome to my 10xBitcoin review! As the name suggests 10xBitcoin claims that it can help you multiply your Bitcoins & earn even more money – it does this by offering a multi-level recruitment opportunity but many people have slated the company as being nothing more than a pyramid scheme. 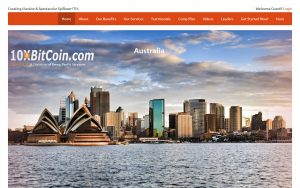 In this review I’ll be uncovering everything there is to know about this newly launched cryptocurrency opportunity & I’ll be answering the big question that everybody’s been asking – is it really legit or is 10xBitcoin a scam?

As you probably know over the past few years Bitcoin has been dramatically increasing in value, and it’s still increasing all the way up to this very date – however, now the price of Bitcoin is sitting at around $7,000 per coin which has now made it out of reach for most people to invest in.

You could still potentially invest in part of a coin for a much lower amount but ultimately when it comes to profiting from a whole coin for the many that ship has sailed – so now various opportunities are opening up that claim to provide alternative ways to profit from the coin.

One of those companies is 10xBitcoin which provides a recruitment opportunity & claims that it can help you turn a one-time investment of just $5 into a whopping monthly income of $14,0002.70 which I think you’ll agree is a very bold claim indeed.

Right from the off it sounds like a typical Ponzi scheme & it reminds me of a similar program named 50 Cent Freedom which claimed it help you turn a mere 50 cents into a whopping monthly income of $8256.30 (but turned out to be a complete scam).

That’s because whilst 10xBitcoin do actually provide products there seems to be very little emphasis put on them whatsoever, in fact, it was actually extremely difficult to even find out that they offered products (let alone find out what they actually are). It’s obvious that the whole company has set up with a primary focus around the money-making opportunity.

And I know I made the opportunity sound kinda simple above (just buy in then recruit others) but if you take a look at their compensation plan you’ll see that it’s not so simple at all – in fact, it’s completely the opposite (as shown below): 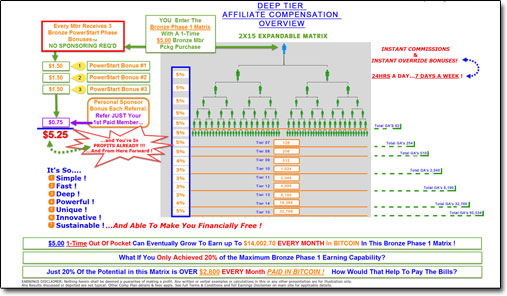 And that’s just the explanation of one small part of the compensation plan – they actually have several different ones for their Silver, Gold, Diamond & Platinum members… Crazy!

If you could, they wouldn’t need a disclaimer. ?

It’s just a classic case of trying to cover their a**es when you sign up, don’t make any money & complain.

“Oh yeah, I know we promised that but didn’t you read our disclaimer? YOUR FAULT”…. (despite them putting the disclaimer in the smallest font possible & making it almost invisible against the background of the page).

What Are The 10xBitcoin Products?

So yeah being brutally honest the products suck – but who cares? In my opinion, it’s clear nobody investing in 10xBitcoin is investing for the products, they’re investing to make money like they do with all these opportunities.

Yeah that’s right 10xBitcoin isn’t the first company to run a Bitcoin scheme like this, I’ve already seen 2 others launch this week alone – Home Blockcoin & USI Tech, they’re all just jumping on the back of the massive cryptocurrency hype in an attempt to suck in unsuspecting newbies & part them with their cash.

Can You Actually Make Money With 10xBitcoin?

Yes you certainly could but it wouldn’t come without risk, and when I say risk I mean a LOT of risk – in fact, there’s probably a higher chance that you’ll end up losing money through this opportunity than there is of you making it, which is why I personally never recommend these kinds of things.

If you get in right at the start then yes, you could cash in because ultimately you’re getting paid from the investors that are buying in after you – but there are a couple of problems with this.

The first problem is the moral issues of it because essentially you’re cashing in on other peoples expense – then secondly you still have the risk aspect because there’s no guarantee that the scheme will actually take off & recruit enough investors for you to actually recoup your funds.

Essentially these schemes are launched to make one person rich & one person only – the creator! Anyone else who makes money makes money by chance. In my opinion, it’s simply not worth it.

I’m going to be pretty blunt here and say that yes it is. Whilst you could potentially make money by investing in 10xBitcoin ultimately the risk is far greater than the reward & like we’ve seen before with these types of things (such as The Advert Platform scam) the company will inevitably collapse & disappear with all of the investor’s cash.

The company claims that the money paid out to investors comes from the sales of their products & that they provide a legitimate way to make money but it doesn’t take a genius to see that the focus is entirely on the money-making & recruitment side of things, just like a classic pyramid scheme.

My advice is not to get sucked into the hype – a lot of people will be pushing it as a great opportunity but the only reason they’ll be doing that is because they’re desperately trying to get new people to invest so that they can attempt to recoup the funds that they’ve personally invested at your expense. Don’t fall for it!

So overall it’s safe to say I’ll be giving 10xBitcoin a thumbs down & I certainly won’t be recommending it because as I mentioned above I feel that the risk if just far greater than any of the potential rewards.