A new website has just launched named Algo Signals & it promises to provide the best FX & crypto signals (as they all do), but unlike the others, this one claims to only work with a select few licensed brokers & even offers you the opportunity to try $1,500 in a demo account before you trade for real. 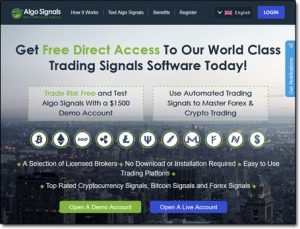 However, it’s safe to say that there’s a LOT of scams in the Forex, crypto & binary options space (hundreds of which I’ve exposed on this blog) so no doubt you’re pretty sceptical about whether or not it actually works…

And that’s exactly why I’ve put together this review because after being asked several times about it by some of my subscribers I’ve decided to find out once & for all is it legit? Or will Algo Signals scam you like the others? So let’s dive right in & take a look…

What Is Algo Signals?

So essentially you’re led to believe that you can merely sign up to Algo Signals, deposit some money & hit “trade” to begin making money on complete autopilot – as from there you’re told that the system will handle everything for you.

On top of that, they even claim to provide you with a whopping $1,500 of demo money for you try it out with too so that you can be “reassured that it really works”… But does it really work? Or is this just another demo trading account scam?

In my opinion, right from the off, it looks a LOT like the latter of those two – it looks to be a scam and the reason I say that is because it very closely resembles most of the other scam trading systems I’ve already exposed.

In fact it looks almost like a pure clone of the Insured Profits scam that circulated about for a short while several years ago. Have they just relaunched it under another name sometime later to catch more people out? Let’s see…

How Does Algo Signals Work?

Okay so in short the Algo Signals trading platform is made out to be a sort of “done-for-you” trading platform, meaning that anyone – inexperienced or experienced – is led to believe that they can simply sign up & profit within just 5 minutes of getting started.

The first thing that will happen after you sign up (which if you haven’t already done I don’t recommend doing) is that you will be presented with their demo trading account which you must “play” with before you get started. They want to prove it really works, and as a result, they force you to play around with some of their $1,500 demo trading cash.

Now, of course, this is not real cash, so if you make money here (which you will) it doesn’t really matter because it means nothing in the real world as you won’t be able to withdraw any of it or convert it to real money. It’s literally just a game & game money to give you an experience of how it works…

And like I said above when you try the demo trading account you WILL make money – there’s no doubt about that… But let me tell you, the real trading scenario is a totally different scenario altogether.

The Algo Signals site is basically just another demo trading account scam that fools you into thinking you’ll be able to make money when in actual fact you won’t. It’s almost exactly like the IQ Option scam that I recently exposed – the demo account works in exactly the same way.

You see they make it seems super easy to make money with the demo account – and you could quite easily make (fake) money with it all day long, but that’s because it’s rigged for you to see success.

Once you actually try with some real money you’ll be left to find out the hard way that it’s a totally different story… And remember those “licensed” brokers they talked about it? Well yes, they are licensed – however, most of the licenses have merely been issued by private companies or the CySEC (which in my opinion holds no weight as the CySEC has licensed MANY scams).

The CySEC for example currently has an active license for IQ Option the company I just mentioned above, yet it only takes a quick look over at TrustPilot to see that thousands are getting scammed by IQ Option.

So I call companies like these demo trading account scams – because essentially that’s how they catch you out. They put together a fake demo trading account, which is just like some sort of binary options video game – they trick you into handing over your real cash, and then when you do they leave you to find out the hard way that it’s all just been a big con.

That’s why the creators of Algo Signals have chosen to hide ALL of their contact details form their website, which brings me onto…

As I just mentioned above Algo Signals have decided to hide all of their contact details from their website and I can tell you that when it comes to online trading opportunities that is a MASSIVE red flag & common trait of a scam.

Literally every single trading website that I’ve come across over the years (which equates to hundreds) that has chosen to hide their address from their website has turned out to be a scam.

You see when it comes to financial services like trading, not only are companies required to hold a license but they’re also required (by law) to display their registered office address as well as their license details on all of their promotional details… So it’s pretty important that they do it & no legitimate company would ever forget to do it I’m pretty darn sure of that.

That’s why when it comes to a trading website an address is actually one of the first things I always look for… And let’s not forget that without an address they are basically totally anonymous. If the website disappeared tomorrow then it would disappear without a trace… Would you really be happy to trade money via a company that could literally vanish into thin air at any moment in time? I sure hope not!

They try & make you believe that you’ll just be able to sign up & start making money on complete auto-pilot but come on, if that was really true then why isn’t everybody doing it? The simple answer is because it’s not possible.

I mean sure, if you put in some work & build up an income through a legitimate business model (like that taught at Wealthy Affiliate) then you could certainly build up a passive income over time – but can you just push a button & make money like Algo Signals claim you can? No way!

Is Algo Signals a Scam?

Well, this a bit of a difficult one – because whilst Algo Signals is clearly designed to part you with your cash, Algo Signals is more of a “trick” than anything else as they’re not the ones that are actually taking your cash… They’re just fooling you into thinking that you’ll be able to profit & then referring you off to a broker via an affiliate link (which they make a commission from when you deposit)…

So in a sense it’s all a big scam – but at the same time it’s hard to call Algo Signals itself a scam. Either way, it’s absolutely safe to say that I do NOT recommend Algo Signals 1 bit or any other “automated” trading program like it.

Don’t get me wrong there are a few legitimate & good trading companies out there (which you can see on my legitimate ways to make money page) but most of the brokers that promise “too good to be true” results (like automated profits) are just flat-out scams.

If you really want to make good money online though then to be honest trading is not one of my top recommendations & the reason for that is because in my opinion, even with the most legitimate brokers it simply involves too much risk. I personally prefer methods that involve much less risk, like the same method that I use to make my own money online.

And if you too in hindsight would prefer a more risk-free method of making money online then I’d advise you to check out the Wealthy Affiliate platform which in my opinion is one of the best places to get started.

Either way, I hope that this review has helped you to save your hard-earned cash & if you do happen to have any more comments or questions about Algo Signals then don’t hesitate to leave them below.