American Consumer Panels is a website that’s been getting talked about a lot lately & that’s likely because of the fact that it claims to provide people with access to legit product testing jobs which can allegedly see them earning $25 to $45 per hour from the comfort of their own home. 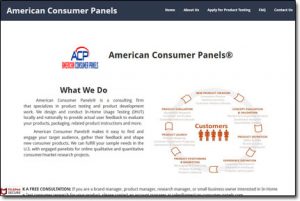 Visitors to the American Consumer Panels website are led to believe that they’ll just need to work a mere 15 to 20 hours per week & that if they do they’ll be able to rake in thousands of dollars each week as a result.

But obviously that all just seems a bit too good to be true, doesn’t it?

So what’s the truth?

Is American Consumer Panels legit? Or is it all just a big scam that’ll ultimately end up seeing you getting conned instead?

Well, you’ll be glad that you came here to my American Consumer Panels review before applying for one of their in-home usage testing jobs because right from the off I can tell you that the whole thing is NOT what it seems on the surface.

What Is American Consumer Panels?

American Consumer Panels is a website that claims it can connect people with what they call in-home usage testing jobs & these jobs supposedly pay on average a whopping $25 to $45 per hour which you’re told you can earn from the comfort of your own home.

Naturally, therefore, American Consumer Panels has been getting a lot of attention lately – especially since they’ve been placing listings for their jobs on several of the top jobs board websites that advertise all throughout the USA.

They claim that anybody can do the jobs regardless of experience & you’re told that all you need to be able to work is a mere 15 to 20 hours per week… But you can also apparently work more if you’d like to earn more.

They basically make it seem like the dream job…

But is it really the dream job it’s made out to be? That’s what a lot of people to be asking & I’m not surprised because frankly the whole thing just sounds WAY too good to be true – especially since most people don’t even earn $25 to $45 per hour at their “real jobs”.

I mean come on, if American Consumer Panels were legit then why on earth would people still be working at jobs they dislike if they could just join ACP & “test products from home” for more money? There has to be a catch right?

And sadly yes – there is a catch…

The catch is that whilst there are indeed legitimate product testing jobs available online, the American Consumer Panels website itself is just a scam that’s been designed to trick you & it doesn’t really provide any in-home usage testing jobs at all.

The person behind it simply keeps on changing the name of it in an attempt to escape the negative reviews that surface so he (or she) can carry on tricking people into signing up to it & making the creators of it money in doing so.

But you don’t have to just take my word for it, instead keep on reading & I’ll show you exactly how it really works below…

How Does American Consumer Panels Work?

Well, the important thing to note here is that how it claims to work & how it really works are 2 very different things… Because as you’ll soon see when I explain what’s going on, there’s really no in-home usage testing jobs at all.

So starting with how it’s supposed to work…

Basically American Consumer Panels have created a very professional looking website which claims to offer access to what they call in-home usage testing jobs & they promote this website via many online jobs sites.

So it’s likely that if you came across American Consumer Panels you did so because you were looking for a job… And to make their website seem even more legitimate they’ve even created an “application process”.

This means that if you arrive at the American Consumer Panels website & you decide that you’d like to work as one of their in-home usage testers you’ll have to firstly complete a quiz which consists of 5 questions.

This is what they refer to as the application process – but as I just mentioned there are only a mere 5 questions & each of the questions are simple yes/no questions (as shown below) so it’s almost impossible to answer them incorrectly.

Surprise surprise though it doesn’t really seem to matter because regardless of your answers once you submit your American Consumer Panels job application you’ll immediately find that you’ve been approved for the jobs.

Well sadly not quite because this is where the trickery begins. According to them you are almost ready to start working & earning but there is 1 more small step that you need to complete before you can begin (as shown below):

They claim that because they need to verify that you reside in the USA you must complete a profile at 2 of the websites that they recommend. They claim the information you enter is needed so that they can gather details about your demographic so that they can provide you with relevant products to test.

And if you’re new to this kind of thing then it might almost sound legit… But it’s not.

Unfortunately, if you actually go ahead & create the profiles as they instruct you to do you’ll just discover that there wasn’t really any job at all. You’ll find out the hard way that you just wasted your time, and you’ll never hear from American Consumer Panels again.

So What Are They Getting Out Of It?

This means that they have a special referral link & if people click on their link & then sign up, the survey companies pay the people behind American Consumer Panels a commission for the referral.

So, in short, the whole American Consumer Panels is all just a big ploy to trick you into signing up with 2 random paid surveys websites that have absolutely nothing to do with product testing or working full-time from home.

Now I mean don’t get me wrong here, you can definitely make money by completing paid surveys however there is absolutely NO way that you will find yourself making anywhere near the promised figure of $25 to $45 per hour.

In fact, with paid surveys alone you’d be lucky to find yourself making as much as a mere $1 per day… They’re very low-paying & that’s why I don’t really recommend them. I believe there are many better, higher-paying alternatives.

Is American Consumer Panels a Scam?

Yes, there’s no doubt about it, American Consumer Panels is definitely a scam because the whole thing is based around trickery & its sole intention is to simply use you to make its creators wealthy by wasting your time.

Despite their bold claims of how much you’ll be able to make the truth is that there are not legit product testing jobs provided through American Consumer Panels. Instead, they just refer you to some random paid survey websites so that they can earn themselves referral commissions by getting you to sign up.

The problem here though is that whilst you can indeed earn money by completing paid surveys, in general, they pay VERY little in return for your time & you’d be lucky to make so much as a mere $1 per day.

As far as I’m concerned there are simply much better ways to make money online.

And I’ll point out here that one of the best ways, in my opinion, to make money online is something called affiliate marketing. It’s the same way I personally make most of my own money online & it simply involves you promoting products (like products from Amazon) or services in return for commissions.

The great thing about affiliate marketing is that thanks to programs like Commission Academy it’s very easy to get started with & the amount you can earn with it is totally uncapped. The more you put in the more you stand to get out.

But whatever you decide to do I just hope that my review of American Consumer Panels here has given you a good insight into how the whole thing really works & hopefully it has helped prevent you from getting caught out by it.