Bedroom Hustle is the name of a money-making program launched by Manny Hanif which promises to provide you with access to an easy method for generating $114.15 per day with just 30 minutes work. 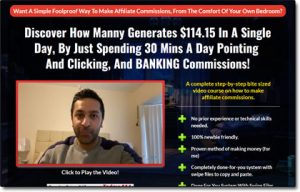 Manny claims that no technical experience is needed & that providing you can simply “point & click” you’ll be able to profit with his system… But is it legit, or is Bedroom Hustle a scam that you should avoid?

Well, I’m glad that you decided to do your due diligence before signing up & came here to this Bedroom Hustle review first because I can immediately tell you that despite its bold claims it doesn’t actually work as promised.

I’ll explain more about that in my Bedroom Hustle review below & I’ll also explain how to get your money back if you’ve already signed up.

What Exactly Is Bedroom Hustle?

Bedroom Hustle as the name suggests is a newly launched money-making program that promises to provide you with access to a method for making good money online right from the comfort of your very own bedroom.

Manny Hanif (the program’s creator) claims that with just 30 minutes of “point & clicking” each day you’ll be able to easily generate profits of $114.15 & over…

According to him, you’ll be using what he calls simple “copy & paste strategies” so that even if you don’t have any technical knowledge or previous experience you’ll still supposedly be able to profit using his program…

If that’s true then why on earth isn’t everybody doing this? Why are people still working at jobs that they dislike if they can make money from the comfort of their home so quickly & easily?

And why is Manny charging people to access his program?

If it truly works as he promises (and as easily as he promises) then why doesn’t he give people access to it for free, then ask them to simply donate him some money from the profits they make?

Well, the answer is because as you likely suspect the whole thing doesn’t really work as promised…

And I’m not going to lie, right from the off I didn’t really have high hopes for this program because Manny Hanif is also the same guy that’s behind the Emoji Profits program which was another similar program I recently reviewed here on this blog.

And the same applies here to the Bedroom Hustle program. I mean yes you do indeed get “some” training in return for your cash – and it is possible to make money… But it’s nowhere near as easy as you’re led to believe.

In fact the truth is that you’ll be much more likely to just end up spending money as opposed to actually earning it.

How Does Bedroom Hustle Work?

Basically the Bedroom Hustle program is loosely based around something called affiliate marketing, which in itself is actually a legitimate way that you can use to earn good money online… And it’s actually the same way that I personally make most of my own money online.

The problem though is that the Bedroom Hustle system essentially promises to provide some “shortcut” or super-easy way to begin making lots of money really quickly – but in reality, that shortcut doesn’t exist.

You see yes, it is indeed possible to make money with affiliate marketing like I mentioned… But in order to do that, you must put in the work to make it happen & you must be prepared to be patient as generally, it doesn’t return immediate results.

The problem though is that there are many people out there that either don’t fully understand affiliate marketing or simply don’t want to wait & so programs like the Bedroom Hustle program are set out to take advantage of them.

Manny is basically saying all of the things that those kinds of people want to hear in the hope that they’ll simply hand over their money & sign up to his program so that he can earn himself some money at their expense.

So you’re probably wondering – if you do happen to buy into it, then what do you actually get?

All you really get access to on the inside of the Bedroom Hustle program is some extremely basic training on what affiliate marketing actually is, along with some training on how to promote affiliate links by sending them in messages (ahem, spamming them) on Facebook.

Here’s the screenshot where Manny briefly mentions that on the sales page:

And in case you don’t already know, affiliate marketing basically involves you promoting products or services online in return for commissions… So you’ll promote affiliate links to products (like products on Amazon), then if somebody clicks through them & makes a purchase – you get paid a commission.

As I say as a stand-alone method it’s actually legit & there are legitimate places you can properly get started with it like Commission Academy but the Bedroom Hustle program, in my opinion, is nothing more than a gimmick.

Manny claims that you can just “point & click” to earn but what you’ll actually be doing is just chasing down strangers on Facebook & actively sending them direct messages to try to get them to buy things through your links.

So will it yield you results?

And that’s even if you’re lucky enough to be able to get any affiliate links to promote in the first place because most affiliate networks require you to have a website before they approve you into their program.

Thankfully if you want to do affiliate marketing the legit way then you can check out my guide on launching a website for free right here.

And if that’s not bad enough on its own, check out all of the hidden costs inside of the program below:

That screenshot is from Manny’s Joint Venture page (shown to affiliates interested in promoting his program) and it reveals that there are 3 additional upsells inside, so the program isn’t really “just $14” like you’re led to believe.

Instead, the total cost of the program is actually $238 plus a recurring fee of $19.99 per month.

My Verdict – Is Bedroom Hustle a Scam?

Well, I guess it’s not really an outright “scam” as such since you do actually get provided with some training in return for your money, but it’s clear to see that it’s extremely misleading & for that reason, I won’t be recommending it.

In my opinion, the Bedroom Hustle system isn’t really set out to truly help you make money, it’s just set out to trick you into parting with your cash so that its creator Manny Hanif can make money at your expense.

So instead if you truly want to make good money from affiliate marketing I would advise you avoid the Bedroom Hustle program (and other hyped-up programs like it) and instead just stick with a legitimate, proven program like Commission Academy.

And I’ll also point out that whilst yes, affiliate marketing is indeed my all-time top recommended way to make money it is certainly not the only way & there are also other alternatives you can check out here too.

But whatever you decide to do I just hope that my honest review of Bedroom Hustle here has given you a good insight into how it all really works & most importantly I hope it’s helped you to save your cash.

If you still happen to have any questions or comments then, of course, don’t hesitate to leave them below & as always I’ll respond as soon as I can. 🙂