Bitcoin Bob is a program that’s just recently launched in the cryptocurrency space & it claims it can provide you with a way to make upwards of $500 per day by investing in alternate “cheap” cryptocurrencies. 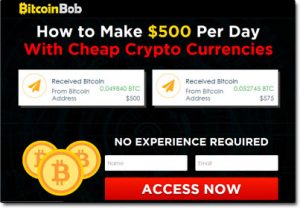 You’re led to believe that even without any experience at crypto-investing you can simply plug into this system, follow the steps & learn how to start making money…

But is it actually legit? Or is Bitcoin Bob a scam that’ll ultimately just part you with your cash?

Well if that’s what you are wondering you can rest assured that you’ve landed in the right place to find out because in this Bitcoin Bob review I’m going to be uncovering literally everything there is you need to know & finding out if you can really make money with it or not.

What Is Bitcoin Bob?

The website itself for Bitcoin Bob actually doesn’t give a great deal away about what the whole thing entails. You’re merely presented with a page that claims you can generate $500 per day through cheap cryptocurrencies & then immediately after you’re asked for your name & email to find out more…

Now, here’s the deal – after entering your name & email (which I don’t recommend you do) you’ll then be redirected off to a completely different website. One of the websites I was redirected too was a website named Monetize Coin, and when I landed on the website I was presented with a message saying that “Bitcoin Bob Invited you to try Monetize Coin”…

However, after heading back to Bitcoin Bob & submitting my details once again I was this time redirected off to an entirely different website once again. This time it was the website of Davor Coin, a company I recently reviewed & came to the conclusion that it was likely a Ponzi scheme.

The reason I came to that conclusion about Davor Coin was that it shares a lot of resemblance to BitConnect, a known Ponzi scheme that was recently forced to close. Many people have actually said that Davor Coin is merely just BitConnect 2.0.

And the worrying thing here is that Monetize Coin (the other website Bitcoin Bob forwarded me too) also looks very similar to Davor Coin & BitConnect too… So from the off, I have to say it doesn’t really look like we can trust Bitcoin Bob.

How Does Bitcoin Bob Work?

Okay so after doing a little digging it turns out that there isn’t really much substance to Bitcoin Bob at all. It’s just a website that’s been created by an affiliate who’s promoting various cryptocurrency make-money opportunities (and dodgy looking ones at that).

This basically means that the person who has created Bitcoin Bob is getting paid for getting people to sign up & invest with various different cryptocurrency programs. So let’s say you get sent to Monetize Coin by Bitcoin Bob & you sign up to try it out, the creator of Bitcoin Bob will earn some money at your expense.

If you don’t happen to join then you’ll begin getting emails from Bitcoin Bob convincing you to try it out – and then when you do join you’ll get emails from him again, this time telling you to join even more programs.

Basically Bitcoin Bob’s mission is just to try & make as much money from you as possible… To be honest he probably isn’t even investing in any of these programs himself because he’ll be earning enough money from getting other people to do so (and that way he dodges all the risk involved).

Obviously that’s just speculation though but overall it doesn’t look good & based off the initial websites that Bitcoin Bob referred me to I really wouldn’t like to put my trust in his recommendations because both the sites looked very suspicious.

But You Can Make Money…

Don’t get me wrong, I’m not saying the Bitcoin Bob website is a flat out scam or anything like that. You can potentially make money with the programs that you are referred to by Bob, but the problem is they come with a whole lot of risk & could potentially land you in a whole lot of trouble.

Let’s take Monetize Coin for example (which works in the exact same way as Davor Coin)… The idea is that you sign up, purchase the coin & then “lend” it back to the creators who claim they’ll invest it to generate you profits.

After “lending” it back to the creators you’ll start seeing a daily interest of around 1% to 2% on your money which sounds fairly nice, but the problem here is that there is absolutely no proof of any real investing going on.

BitConnect was said to have worked in exactly the same way but the authorities found out that the whole lending thing was just a ploy & that it was actually nothing more than just a big Ponzi scheme… In my opinion, I suspect the exact same thing is happening with these other companies that Bitcoin Bob is referring you to.

And in case you don’t know, a Ponzi scheme is basically like a big pyramid, where people are making money from the money that’s getting paid in by the new people joining below them. You could make money from it at the top (but it’s still illegal) however if you happen to get in lower down the chance of you making money from it is very low.

Most people who join actually make nothing at all – instead they end up losing money.

That’s why the authorities forced BitConnect to close because whilst people can make money for a short while essentially the whole business model is completely unsustainable & it will eventually collapse, leaving lot’s of people out of pocket.

So yeah, whilst you can make money from this type of thing I really wouldn’t recommend it because it’s far too risky. Why would you want to invest money into something that could collapse at any moment?

Anyway, I think you get the idea…

Is Bitcoin Bob a Scam?

Well, I can’t really say that Bitcoin Bob is a scam because realistically Bitcoin Bob is just a website that’s sending you off to different websites. You’re not actually investing any money with Bob himself.

However, what I will say is that all of the websites that Bitcoin Bob seems to redirect you to all look very sketchy. There is no way that I would personally invest any money with them because, in my opinion, they all look like Ponzi schemes – something I definitely wouldn’t want to be involved in.

But as I said above there is indeed the potential to actually make money with these companies, it’s not like they are set out to just take your money and run. What I am saying though is that the risk here really outweighs the reward, even more so for the average Joe. The people who are actually making money with this thing are the guys at the very top – the creators and close friends of them that got in early.

So overall I am definitely going to say that this is something you should avoid and that I wouldn’t really trust the websites that Bitcoin Bob refers you to. If you do happen to have any further questions or comments don’t hesitate to leave them below.