Davor Coin is a newly launched cryptocurrency-based make-money opportunity & it claims that its members can generate easy automated profits by investing in the coin & participating in their “unique” lending program. 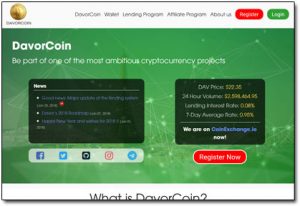 On top of that, they boast that you’ll also be able to earn as the coin increases in value (which they seem very confident on) & by recruiting other people to the opportunity, but the problem here is that this all sounds way too much like BitConnect which was a similar company that was recently issued with a cease & desist notice after it was suspected by the US Gov to be nothing more than a mere Ponzi Scheme.

So what’s the deal in this case, is Davor Coin a scam?

Or is it a legit opportunity that you can actually make money from?

Thankfully you’ve landed in the right place to find out because I’m going to be uncovering everything there is you need to know right here in this review.

What Is Davor Coin?

As I briefly mentioned above Davor Coin is a crypto make-money opportunity that’s very, very similar to a program that previously launched named BitConnect – so if you’ve had experience with that company you’ll probably already have a pretty good idea as to how Davor Coin operates.

For those of you who don’t though, let me explain…

Davor Coin is a cryptocurrency that’s launched on 3 different exchanges, those being YoBit, CoinExchange & Mercatox. The creators of Davor Coin claim that they launched it to rival the other big-name cryptocurrencies like Ethereum & Bitcoin, and like you can with those big-name coins you can purchase Davor Coin in the hope that it’s value will increase over time.

At the moment investing in cryptocurrency has become hugely popular because people have seen how quickly (and drastically) the price of Bitcoin rose so now many people are trying to get involved to tap into the profits. Sadly though this has meant that a lot of cryptocurrency scams have started launching in an attempt to take advantage of these crypto “newbies”, many of which I’ve reviewed right here on this blog.

One of those scams was a company called BitConnect, who launched a coin named the BitConnect X Coin. The concept with BitConnect was that on top of merely investing, they provided members with an additional way to make money & this was through a “lending program”. Essentially you were led to believe that you were lending money back to the BitConnect company so that they could further develop their currency & as a result, they would pay you a staggering interest.

On top of that, they also offered a recruitment scheme through which you could earn even more money by promoting the company & getting more people to sign up & participate in the lending opportunity, however, it was later deemed that BitConnect was nothing more than a Ponzi scheme & it was forced to close down, along with USI Tech which was another similar company that was tied in with BitConnect.

Anyway, there’s now been a suggestion that Davor Coin is merely version 2 of BitConnect because the resemblance is very close. It’s also so coincidental that Davor Coin happened to launch so close to BitConnect’s collapse (around a month prior)… So many people think that the creators of BitConnect were expecting a collapse & that they had Davor Coin saved up as a backup plan for when it did.

Obviously that’s only speculation, but in my opinion, it does appear to hold true because the model of Davor Coin seems exactly the same to that of BitConnect which you’ll see for yourself in a moment when I show you in a little more detail.

How Does Davor Coin Work?

The process itself is actually quite simple, but do be aware that it comes with a lot of risks (because in my opinion this program also looks an awful lot like a Ponzi scheme itself).

Basically, to get started with Davor Coin you need to purchase the coins & you do this by signing up at their website & sending BTC to the specified address to load your wallet. I firstly want to point out that it’s a bit weird a company claiming to rival Bitcoin is accepting payments through BTC as opposed to dollar amounts… You’re never going to be able to rival a company if you’re using their service as your main means of payment LOL.

So yeah that in itself is pretty suspicious – but anyway, after you’ve got some Davor Coin in your wallet you then have a few different ways you can potentially make money (though you’ll be pushed through the lending/recruiting route).

The first method is through trading – as mentioned above the Davor Coin is available on 3 exchanges & you have the ability to make money by buying & selling the coin as it increases/decreases in value. This is the most uncommon method of making money because the majority of people signing up are merely holding onto the coins in the hope that they will increase in value over time.

The second method is through “lending”. After purchasing your Davor Coins you’re provided with the ability to “lend” these back to the creators of Davor Coin themselves so that they can appear better the platform. You’re encouraged to do this as they claim it will help them increase the value of the coin which should ultimately work in your favour. In return, you’ll be paid a handsome amount of interest for as long as you keep your funds invested.

And finally, the third method through which you’re able to make money is by recruiting new investors, so you’ll be actively encouraged to share the opportunity with friends or family. For each member that signs up & invests you’ll get paid a commission in return and the size of this commission will be dependant on the amount that they invest.

The important things to note here though are the following;

I know I’ve said it time & time again throughout this review but honestly, the similarity between Davor Coin & the now-defunct company BitConnect is just way too close. If you put these companies side by side they almost look like an exact copy of each other which is NOT good news.

Can you make money with Davor Coin? It’s likely you can yes, but the risk is just immense – I mean if this is as I suspect just a clone of BitConnect then ultimately it’s going to collapse & there’s no telling when it will do so… This means the chances are you will end up losing money not making it.

But I mean take a look at these 2 tables taken from the BitConnect & Davor Coin websites:

Now this second one is from the Davor Coin website:

That’s more than coincidence in my opinion!

Is Davor Coin a Scam?

In my opinion yes, I do believe Davor Coin to be a scam. As far as I can see it is absolutely no different to BitConnect & I suspect it to be nothing more than a Ponzi scheme which will inevitably collapse. I certainly wouldn’t advise getting involved with this opportunity because it just poses far too much risk.

I mean sure, if you invested in Davor Coin you could potentially make some money back – but that is with the risk of losing your entire investment at any given time because who’s to say when the company will collapse? Essentially investing money into a company like this is nothing more than a gamble.

On top of that one of the main ways you’ll be encouraged to make money through Davor Coin is by recruiting others, so if you become a part of it then you should also expect to be liable for the losses of all of the other people that you bring into the program too. Ultimately it just sounds like bad news to me.

So overall as you can probably guess I won’t be recommending Davor Coin. My reasoning for that is because it not only closely resembles the Ponzi scheme Bitconnect but because it also combines both crypto-investing & recruiting which almost always spells out trouble.

For legitimate alternatives I suggest you check out this post, and if you have any further questions or comments then don’t hesitate to leave them below – I’d love to hear your thoughts on this company.

2 thoughts on “Is Davor Coin a Scam? Exposing The Ponzi Scheme In My Review!”