BitConnect X is one of the latest cryptocurrency ICO’s to surface & there’s been a lot of hype surrounding its launch on social media. Many people are claiming that it’s going to be the “next big thing” & that it will make early investors a lot of money. 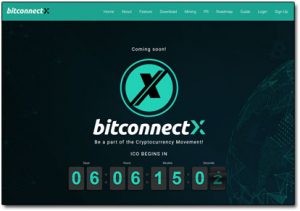 But is it actually legit, or is BitConnect X a scam that’ll just see you parted from your hard earned cash? I’ve done the digging & in this review, I’m going to be uncovering everything there is to know about this brand new ICO.

So if you’ve been thinking about investing in BitConnect X then you can rest assured that you’ve landed in exactly the right place to find out all you need to know & most importantly whether or not you’ll actually be able to make money from it.

What Is BitConnect X?

BitConnect X is a new ICO that’s been launched by the creators of the network marketing style cryptocurrency opportunity named BitConnect, a company which I’ve previously reviewed on this blog.

Since I’ve already reviewed BitConnect itself here I won’t be going into too much detail on that specifically (as you can just read my review if you want to find out more), but what I will bring to light is the fact that I made the decision not to recommend the opportunity after reviewing it.

The reason for that was because whilst I couldn’t really prove it I had suspected that BitConnect shared similar traits to that of a Ponzi scheme & in my opinion it just all looked a little bit too risky for my liking.

You see when it comes to these cryptocurrency things you have to be extremely careful because a lot of the transactions are not tracked & as a result, there have been a lot of scams launching over the past year or so, many of which I’ve exposed here on this blog.

Thankfully though since you’ve landed on this review it looks like you’re doing your due diligence. It’s always important to do that but I just want to stress that it’s even more so important when it comes to cryptocurrency opportunities.

But anyway, now the creators of BitConnect have decided to launch their own ICO though it’s a little bit weird that they’ve decided to do this since they already have their own cryptocurrency named the BitConnectCoin (BCC).

This is a question it seems many people have been asking, I mean why would a company like BitConnect who already have their own coin decide to launch another ICO to create yet another coin?

Basically BitConnect is a cryptocurrency lending style platform, or allegedly that’s what it is anyway according to the creators. You basically invest in the BitConnectCoin by transferring BTC, then you “lend” this money back to BitConnect & they pay you a daily interest in return for doing so.

The longer you keep your money held up the company the more money you will earn back in interest (this is why you are actively encouraged to reinvest your profits too). You’re also given the opportunity to earn more by recruiting others & getting them to invest too.

However the “interest rates” that they promise you just seem way too bold. I personally can’t see anyway you could guarantee such high rates from a “lending” business model like this & that’s what led me into thinking that the whole thing is actually just a Ponzi scheme. I wasn’t the only one to think that either as it actually hit the news about Bitconnect potentially being a Ponzi.

But as to whether it is or not nobody can say for certain without having access to all the financial data & seeing where the money is really coming from. All I know is that it just seems way too risky & after seeing several similar companies collapse & leave people without their cash it’s not a risk I’m willing to take or recommend.

So what’s BitConnect X all about?

I hear ya, why on earth would they need to launch another coin when they already have one? Well many believe they’ve decided to launch the BitConnect X ICO because the creators have suspected that BitConnect is going to collapse shortly (because it is a Ponzi scheme) so they’ve essentially created a “backup” so that they continue to cash in…

As to whether or not this is true well I cannot confirm because the ICO has not yet launched it doesn’t go live until the 10th of January and they are keeping all details completely hidden until this date. The BitConnect X whitepaper & everything is on complete lock-down until the 10th so as of now it really is just a guessing game.

I have got to admit though that I personally am siding with the theory of the BitConnect X ICO being launched as a backup plan & as a result I myself won’t be making any rush to invest in this ICO because again that level of risk is just far too great.

Is Bitconnect X a Scam?

Well at the moment since the details haven’t been released it’s hard to tell – it could just be a backup plan to raise extra money for a collapsing Ponzi scheme or it could be a genuine ICO worth investment. Until January the 10th nobody will know…

However, what I can say is that I certainly won’t be getting my hopes up. Whilst BitConnect has been going for quite a while & has actually risen to be one of the biggest cryptocurrencies the whole business model just seems very suspect in my opinion & the size of the company alone doesn’t necessarily mean that it’s legit.

Essentially you’re just led to take the creator’s word for it when they say that there’s a “lending program” going on & without proper evidence of that then I just wouldn’t be willing to invest & I wouldn’t advise anyone else to invest either without access to solid proof of how your money is being used.

Don’t get me wrong though there are people who are certainly making money through BitConnect but if you take a look you will notice that the majority who are doing so are making the main part of their money primarily from recruiting others into the opportunity & earning a commission when they invest.

It reminds me of a similar program named the Power Mining Pool which claims to generate profits through mining yet has no solid proof of any mining operation going on. It’s clear in the case of the Power Mining Pool that the money being paid out is merely the money coming into the company from new investors & that’s likely what’s happening here too with BitConnect.

In the case of the Power Mining Pool the “mining operation” is just a cover-up for the Ponzi scheme – I suspect that the “lending program” is just a similar (yet more convincing) attempt at doing the same thing.

The Bottom Line – Should You Invest In BitConnect X?

Well at the moment honestly without seeing the actual BitConnect X whitepaper there is no real way to tell – however what I will say is that going off the previous “suspicious” opportunity associated with the creators of this ICO I can say that the chances are I won’t be investing.

What I will do though is come back & update this review on the 10th of January when all the details are released, or as soon as they are if they don’t happen to be released on that date for whatever reason.

Ultimately though I really don’t have high hopes for the BitConnect X ICO & think that it’s likely been launched purely so that the creators of BitConnect can keep milking the cash cow when BitConnect itself collapses (which I imagine is what they suspect is happening for them to launch this new ICO in the first place).