The Bitcoin Freedom trading system claims to have been built around a completely new & a revolutionary concept that can see you automatically generating huge profits from the cryptocurrency known as Bitcoin. 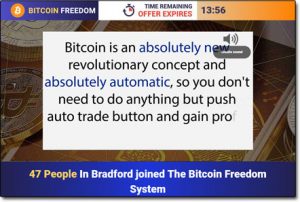 You’re told that you literally don’t have to do anything other than push the “auto trade” button & that the system will then auto-trade Bitcoin profitably on your behalf – meaning even trading newbies can allegedly profit with it too.

The creator (who suspiciously remains anonymous) even claims that it’s all completely free.

But is it actually legit? Or is Bitcoin Freedom a scam to avoid?

Well, I’m really glad that you decided to do your due diligence before signing up & came here to my Bitcoin Freedom review because right from the off I can tell you that the whole thing is not what it seems & that it won’t really help you make money.

What Exactly Is The Bitcoin Freedom System?

The Bitcoin Freedom system basically claims to be an automated trading system & it leads you towards believing that it’ll be able to trade Bitcoin profitably entirely on your behalf so that you can just sit back & make money.

It states that it gives you “the chance to gain $5,000 per day profits and freedom”…

But $5,000 per day in profits is a heck of a lot of money, especially since you’re told that you don’t need to do anything whatsoever other than literally sign up, deposit some money & activate the system.

If those claims are true then why on earth isn’t everybody using it?

Why are people still stuck working in jobs they dislike if they could just sign up to the Bitcoin Freedom system & make even more money than they do in their jobs entirely on autopilot? It doesn’t make sense…

Well, the answer, in short, is because the Bitcoin Freedom system doesn’t really work the way it promises. I can tell you right from the off that it’s actually nothing but a trick & it’s purely set out to part you with your cash.

The Bitcoin Freedom system won’t really help you make money at all & the reason I say that so confidently is because I’ve seen this exact same system several times before launched under various different names.

It’s what’s known as a binary options scam & some of its previous names include Big Money Rush & Crypto Method. The person behind it just keeps on changing the name & appearance a little in an attempt to escape the reviews that expose the truth about how it really works.

So how does it really work? Can you make any money with it? And what if you’ve already signed up?

How Does Bitcoin Freedom Work?

So as I briefly touched on the previous section of this review, the concept is that you allegedly just need to sign up to Bitcoin Freedom for free, make a deposit with the broker that they recommend & then activate the system in order to begin profiting.

But whilst that sounds nice in theory, in reality, it’s not really how it works…

You see there are 2 VERY important things that the creator of the Bitcoin Freedom system fails to make clear which is the fact that he (or she) is actually affiliated with the broker that you’re told to deposit with and that the broker is an unlicensed binary options broker.

At the very bottom of the Bitcoin Freedom website they have put the following disclaimer in some extremely small text – it’s almost impossible to see:

But why is this so bad? Affiliate marketing (the method of earning commissions by promoting products/services online) is legit right?

Well, it is – but the way Bitcoin Freedom is doing it isn’t. You see binary options brokers work differently to normal brokers & it’s this difference coupled with the affiliation the proves the Bitcoin Freedom system doesn’t work.

The reason for that is because you don’t “invest” in things via binary options brokers, instead, you basically place bets on whether you think the value of something will go up or down in a certain time window (usually under 60 seconds).

If you guess right, you get your money back plus a little bonus, but if you lose, the broker takes everything.

This means that if you win then the broker has to pay you the winnings out of their own pockets – it means that they actually lose money if you win so it’s in their interests for you to lose. They don’t want you to win.

So now that you know that, ask yourself this – why would a binary options broker that only makes money when you lose money pay commissions to the creator of a system which could supposedly guarantee you profitable trades?

They wouldn’t… There’s no way it would happen because such a trading system would put the broker out of business overnight if it were actually real. The real reason the broker is paying the creator of the Bitcoin Freedom system commissions is because they know it’s designed to make you LOSE money.

And It’s Designed To Make You Lose a LOT

Unfortunately, though the person behind Bitcoin Freedom has come up with a much more cunning plan to make you lose even more money.

You see after depositing with the broker that you’re “recommended” you do indeed get access to the Bitcoin Freedom trading system as promised – and if you activate it then it does appear as if it’s making you profits.

In fact, you might think that you’ve discovered a real way to get rich…

The problem though is that the whole thing is a fake – the Bitcoin Freedom trading system isn’t real. It’s not connected to any live markets… It’s basically just a video game & it’s just a trick to get you to keep depositing more money.

The broker claims that the more you deposit, the bigger the profits you’ll be able to make & so you’re actively encouraged to do exactly that (repeatedly).

This means that you could end up potentially losing tens of thousands of dollars to the Bitcoin Freedom system before you finally discover that it’s a scam & you’ll only discover that when you eventually try to make a withdrawal.

The broker will either refuse your withdrawal request, ignore it – or they may even ask you to deposit more money to “release it” which as you can likely guess is just a further addition to the scam.

Basically, in short, the whole thing is just a trick to get you to hand over as much as possible, which brings me onto…

My Verdict – Is Bitcoin Freedom a Scam?

The Bitcoin Freedom system is definitely a scam there’s no doubt about it. The whole thing has been built on lies & deceit & its sole intention is to trick you into signing up with a dangerous, unlicensed binary options broker.

As I mentioned at the very start of this review I’ve actually already seen this exact same scam launched in the past under different names such as Big Money Rush & Crypto Method. The creator just keeps changing it to try & escape the reviews that expose the truth.

Well, the truth has been once again exposed & it’s safe to say that you should 100% avoid the Bitcoin Freedom system.

I’ll also point out that my personal favourite way for building an income online is something called affiliate marketing & the reason it’s my favourite is because it’s actually the same way I make most of my own money online.

Affiliate marketing basically involves you promoting products or services online in return for commissions & the amount you can earn with it is totally uncapped… The harder you work the more you stand to make.

Plus you can even get started with it for free over at Wealthy Affiliate.

But whatever you decide to do I just sincerely hope that my review of Bitcoin Freedom here has given you a good insight into how the system really works & most importantly I hope it has helped save your from losing money to it.