Whilst fooling around on my phone yesterday I happened to stumble across an app named the Bitcoin UP app which promised to provide me with access to a “fast & effective way to get rich”. 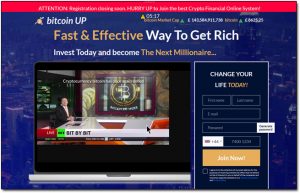 All I had to do, according to the website, was simply sign up & make a small deposit… Then the Bitcoin UP app would trade Bitcoin entirely on my behalf & generate me huge profits all on complete autopilot.

But if it were really true, then why isn’t everybody doing it? Why are people still working at jobs they dislike if they can just sign up to Bitcoin UP & earn money on autopilot instead?

Is Bitcoin UP a scam?

In short, yes it is – but in this Bitcoin UP review I’m going to uncover exactly how it all works & I’m also going to show you the red flags that prove it won’t work as promised.

What Is Bitcoin UP?

Bitcoin UP is supposedly a revolutionary new trading app that can trade Bitcoin profitably, entirely on your behalf.

So you’re essentially led to believe that you can simply sign up, make a small deposit with the broker that they recommend ($250+) and then activate the app to have it begin generating you money, completely hands-free.

From there you just sit back & watch the money come rolling in… Allegedly.

And Bitcoin UP doesn’t just claim to be able to make you any old money… Oh no, the Bitcoin UP app actually claims that it can generate you as much as a whopping $1,200+ per day.

The app even comes with the following warning:

Caution! Next week you will stop working, because during the last 5 years, the algorithms of our Online Platform have enriched people and made them financially free.

But obviously, as much as we’d all like it to be true – it’s all complete nonsense.

The Bitcoin UP app is nothing but a scam & I can say that so confidently because it’s actually a scam that I’ve already seen & exposed on this blog several times before.

The people behind it simply keep on changing its name in an attempt to escape the negative reviews so that they can continue tricking people into signing up & then parting them with their cash.

Some of its previous names include crypt.EX, Become Wealthy Club & Bitcoin Union.

And don’t worry, I’m not going to expect you to “just take my word for it” when I say it’s a scam. Instead, I’ll show you exactly how it all really works (and why it won’t really work) below.

How Does The Bitcoin UP App Work?

The Bitcoin UP app website tells you that you simply need to sign up, make a small deposit with the broker that they recommend & then activate the app to have it begin making profitable trades on your behalf.

But it doesn’t really work like that… In fact, the app is actually completely fake.

This means that if you sign up & deposit, the broker will pay them a commission.

And this in itself literally proves that it’s a scam.

The reason for that is because binary options brokers work differently to normal brokers.

Through a binary options broker, you don’t actually “invest” in anything. Instead, you simply place “bets” on whether or not you think the value of something will go up or down over a certain period of time (usually under 60 seconds).

This means that if you win, the broker has to pay you your winnings out of their own pockets… So they only make money if you end up losing money, which means they obviously want you to lose.

Why would a binary options broker, a broker that only earns money when you lose money, pay commissions to the creator of a “guaranteed-winning” system for getting you to sign up with them?

They wouldn’t! No way.

If such a system really existed & worked, it would put the brokers out of business overnight. There’s no way they’d want you to use it & there’s certainly no way they’d pay the creators of the systems commissions for getting you to use it.

The real reason that they’re paying the creator of the Bitcoin UP app scam commissions is that they’re both in cahoots on the scam together. It’s all a big trick.

But that’s only the first trick… Unfortunately, things actually get worse…

The initial trickery mentioned in the previous section of this Bitcoin UP review is only the first part of the trickery. After that, once you’re in, comes even more trickery.

You see, you might be thinking that after making a deposit with the broker you’ll simply be left to find out that the app doesn’t really exist or that it doesn’t work as promised… But nope.

The creators of the Bitcoin UP scam have actually gone to the extreme lengths of creating a fake trading app to make you believe that it’s actually working to encourage you to make further deposits.

The app isn’t really connected to any live markets. The truth is that it’s really nothing more than a simple video game & all of the so-called “profitable trades” are completely make-believe.

You’ll only get to finally find out it’s all been a scam when you eventually press to make a withdrawal & receive that it never gets processed… But by that point, you could have parted with thousands.

When it comes to these sorts of things, a degree of common sense has to be applied. If it really worked as promised, then people would not be working at jobs. Everybody would be rich… And they’re not… Because it doesn’t really work.

On top of that, however, there’s also the fact that the Bitcoin UP app makes a lot of claims which if you take a moment to look into, all turn out to be completely false.

For example, the app claims to have been featured on CNN, Bloomberg & Forbes… But a quick search of all of those outlets reveals that it hasn’t the claims are false.

In fact, Forbes actually strongly advise against binary trading as outlined below:

Then, alongside that there’s the fact that the Bitcoin UP website displays no regulatory licensing information whatsoever, which is a requirement by law for investment-related websites to display.

You should never, ever, invest via an unlicensed website no matter how good the opportunity may seem because it means that if something goes wrong, you’ll likely have no protection.

And to top it all off, the Bitcoin UP scam also makes use of fake testimonials, as shown below:

Is Bitcoin UP a Scam?

Absolutely, there are no 2 ways about – the Bitcoin UP app is definitely a scam. The whole thing is just a trick that’s been designed to part you with your hard-earned cash & therefore should be avoided.

If you deposit, you’ll get access to the “app” as promised but the app isn’t really connected to any live markets… It’s essentially nothing more than a video game & it’ll just falsify profits to encourage you to keep on depositing more & more money.

Sadly, once you finally try to make a withdrawal you’ll just be left to discover that the whole thing has been a scam.

And if you think that you can just deposit to “try it out” and get your money back if it doesn’t work as promised, think again, because the broker that you’re told to deposit with is actually in on the scam too.

Basically, it’s safe to say that the entire thing should be avoided.

But the good news is that even though the Bitcoin UP app may be a scam, there are still plenty of legitimate alternative ways that you earn money online.

And I’ll point out here that one of my all-time top recommended methods is something called affiliate marketing, which is actually the same way that I personally make most of my own money online.

Through affiliate marketing, you can earn money by promoting products or services online & there’s absolutely no limit to the amount that you can earn with it. The harder you work, the more you stand to make.

So if you’re still looking for a legitimate way to earn then I’d highly recommend you check out affiliate marketing instead.

But whatever you decide to do I just hope that my Bitcoin UP review here has given you a good insight into how it really works & hopefully it’s helped prevent you from getting scammed.

If you still happen to have any further questions or comments then, of course, don’t hesitate to leave them below & as always I’ll get back to you as soon as I can. 🙂