Whilst browsing the web yesterday, I happened to stumble across a weird “news” article that was promoting a so-called automated money-making system named Bitcoin Union. 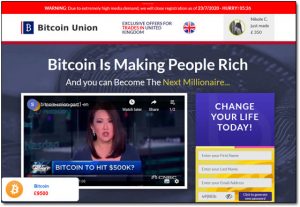 And given the fact that I own a website related to making money online, I decided to check it out to see what it was all about. Does Bitcoin Union really work? I was pretty curious.

The Bitcoin Union website literally claimed that I could be “the next millionaire” & that all I needed to do in order to begin making money was simply sign up & make a small deposit.

But obviously, that sounds pretty too good to be true. So what’s the deal?

Is Bitcoin Union a scam? Or can you really actually make money with it as it claims?

I decided to put the claims to the test & in this honest Bitcoin Union review, I’ll be uncovering the truth as to how it all really works & why you WON’T make any money if you decide to sign up.

What Is Bitcoin Union?

Bitcoin Union claims to be an award-winning trading app & the website promoting it suggests that it provides an entirely automated way to earn money from Bitcoin by making trades on your behalf.

You’re led to believe that all you need to do is simply sign up for the app, make a small deposit & then “activate” it in order to have it begin generating you automated profits.

And the app even claims that it can literally generate you thousands of dollars per day.

If all of this is true & if the Bitcoin Union app really works as promised, then why on earth isn’t everybody using it?

Why are people still stuck working at jobs they dislike if they could simply activate the Bitcoin Union app instead & begin making thousands of dollars every single day?

The answer is because as you’ve probably already guessed, the Bitcoin Union app doesn’t really work as promised. In fact, it’ll do nothing other than make you LOSE money.

And I can say that so confidently because I’ve actually already seen this exact same scam several times before, launched under various different names such as Bitcoin Freedom, Bitcoin Compass & Bitcoin Capital.

The people behind it simply keep on changing its name in an attempt to escape the reviews that expose the truth (like mine) so that they can continue conning people out of their hard-earned cash.

So how exactly does it work then? Let’s take a look…

How Does Bitcoin Union Work?

In theory, the Bitcoin Union system is supposed to make automated, profitable trades on your behalf. All you need to do is sign up & make a deposit with the “recommended broker” in order to get started.

But the problem is that’s not really how it works.

You see, the truth is that the whole thing is nothing more than a mere ploy that’s been designed to trick you into making a deposit with a rogue binary options broker.

The reason for that is because binary trading is essentially just like gambling. Through binary trading you don’t actually invest in anything, instead, you simply place bets on whether you think the value of something will go up or down in a certain timeframe (usually under 60 seconds).

But everything is geared in the binary broker’s favour – it’s a game designed to make you lose.

And the creator of the Bitcoin Union scam is essentially affiliated with the broker that you’re “recommended” to deposit with, which means when you make a deposit, he gets paid a handsome commission at your expense.

Now, whilst you might think that from this point you’ll just be left to find out that the Bitcoin Union app doesn’t really work as promised – unfortunately not. The scam is much more cunning than that.

The creator of the Bitcoin Union scam has actually gone to the extreme extent of creating a fake trading app to make you think that you’re actually profiting so that you’ll continue to make even more deposits with the broker he’s affiliated with (so that he can earn even more commissions).

It’s a very nasty scam, to say the least.

And the proof it’s a scam lies in the fact that the creator of Bitcoin Union is affiliated with the broker in the first place.

You see, because binary options brokers work differently to normal brokers (as mentioned above), this means that they only make money when you LOSE money.

If you win money, the broker has to pay you it out of their own pockets, so they absolutely do not want you to win.

So ask yourself this, if the Bitcoin Union app was legit, then why on earth would the broker be paying the creator commissions for getting people to use it?

They wouldn’t! Because if it were real, such an app would instantly put the broker out of business.

The reality is that both the broker & the creator of the Bitcoin Union app scam are in cahoots on it together. The whole thing is a trick designed to part you with your cash.

The Red Flags That Prove It’s a Scam

The first red flag is the obvious one – the fact that the whole thing simply sounds WAY too good to be true. If Bitcoin Union really worked, everybody would be rich – and they’re not.

The second red flag is that the Bitcoin Union website displays no contact or ownership information whatsoever – in fact, they actually do the opposite. They’ve gone to great lengths to hide their identity.

The third red flag is the fact that the Bitcoin Union website makes use of fake scarcity timers. The timers claim that registrations are set to close in a matter of fakes, but a quick refresh of the page highlights that they’re completely fake because they reset back to the time that they started on.

And the fourth red flag is the fact that the Bitcoin Union website makes use of fake testimonials. For example, you’re told that “Nikole C just made £350”, as shown below: 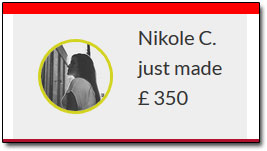 However, a quick search using Google’s Reverse Image Search tool reveals that the image shown for “Nikole C” has actually just been pulled from a stock photo website, as shown below:

If the system really worked, why would they need to fake their testimonials?

What About The News Article?

One of the reasons many people get caught out by scams like the Bitcoin Union scam is because their creators cunningly promote them via fake news article, like the one shown below:

The news article appears to be a real BBC News article talking about a man that was allegedly found with more than $561,000 in a duffel bag, only for it to turn out that he had been using the Bitcoin Union app to make money.

Each of the links on the page then takes you through to said Bitcoin Union app.

But the whole article is completely fake, and that’s easily revealed by taking a quick look at the web address in the address bar of the page which looks like this:

The web address “newseutoday.co” is not the address of a real news website, it’s a fraud.

And if you actually visit the homepage of the so-called news website (which I don’t recommend doing), you actually just get redirected through to another Bitcoin scam named Bitcoin Era, which I’ve already exposed.

Is Bitcoin Union a Scam?

Absolutely, there’s no doubt about it – the Bitcoin Union app is definitely a scam. It’s built entirely on lies & deceit & it’ll do nothing other than make you lose money.

The whole thing is nothing more than a ploy to trick you into depositing money with a rogue binary options broker, who’ll then try to sucker you out of even more cash if you do.

And so should any other method that promises “fast & easy” money, because there’s no such thing. Anything promising fast & easy money without any work is likely just a scam.

The truth is that yes, you can indeed make very good money online, but in order to do so, you must be prepared to put in a lot of hard work to make it happen. It’s not going to just fall into your lap.

The good news is that if you are indeed willing to put in the work to make it happen, there are many great legitimate ways to get started, such as affiliate marketing (which is my top recommended method).

So if you’d still like to learn how to make money & you want to give that a try, I’d highly recommend you check out Wealthy Affiliate which is one of the best places to get started.

But either way, whatever you decide to do I just sincerely hope that my Bitcoin Union review here has helped give you a good insight into how the app really works, and most importantly I hope it’s helped you to avoid it.

If you still happen to have any further questions or comments, don’t hesitate to leave them below. 🙂