The Bitcoin Capital software just recently surfaced online & it promises to provide people with access to an easy way to earn money from Bitcoin as it claims to be able to generate profitable trades on your behalf. 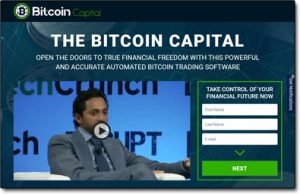 But is it legit? Or is The Bitcoin Capital a scam to avoid?

Well, I’m really glad that you decided to come here to my review of The Bitcoin Capital software before you went ahead & signed up to it because I can tell you right from the off that it’s not what it seems.

What Exactly Is The Bitcoin Capital Software?

The Bitcoin Capital software claims to be a powerful & accurate piece of Bitcoin trading software which can supposedly (according to its own claims) “open up the doors to true financial freedom”.

And as I mentioned at the start of this review you’re basically led towards believing that it’ll generate you an automated income by trading Bitcoin profitably entirely on your behalf.

You’re told that you don’t need experience or trading knowledge & you’re essentially led to believe that you can just sign up, make a deposit, activate the software & then begin earning.

The software’s website even claims that most members make over $2,000 per day & that some have made their first million dollars within just 2 months of getting started… Plus they even claim that the software is free to use.

But I know what you’re thinking – what’s the catch?

After all if The Bitcoin Capital software really works as you’re told it does then why on earth isn’t everybody using it?

Why are people still working at jobs that they dislike if they could simply sign up to The Bitcoin Capital software & make more money without actually even having to do anything? It doesn’t make sense, right?

Well, the answer is because The Bitcoin Capital software doesn’t work as promised.

The truth is that in reality, the whole thing is nothing but a scam & I can say that so confidently because I’ve seen this exact same scam several times before when it was launched under different names.

Some of its previous names include the Crypto Method, Crypto Comeback Pro & The News Spy.

The person behind it simply keeps on changing its name in an attempt to escape the negative reviews that expose the truth so that he (or she) can continue tricking people into signing up to it and earning at their expense.

So how does it really work? How does the scam work? Keep reading to find out because that’s exactly what I’m going to explain next…

How Does The Bitcoin Capital Software Work?

As I touched on in the previous section of this review you’re told that all you need to do to generate profits with The Bitcoin Capital software is sign up, make a deposit & then activate the system…

But that’s not really the full truth.

You see there’s one very important thing which the creator of The Bitcoin Capital software fails to mention & that’s the fact that he (or she) is actually affiliated with the broker that you’re told to deposit with.

This means when you sign up & deposit, the person behind The Bitcoin Capital software gets paid a commission at your expense.

And that’s essentially what the whole thing is about – The Bitcoin Capital software is basically all just a ploy which has been designed to trick you into depositing with an unlicensed, rogue binary options broker.

What’s worse though is that the scam doesn’t end at the deposit, in fact, that’s actually only where the scam begins.

So when you sign up & deposit via The Bitcoin Capital software (which I don’t recommend doing) you will indeed get access to the trading software like you’re promised – and it will indeed appear to be profitable.

This will make you think that it’s actually real & you’ll be actively encouraged to deposit more money to “create bigger profits” but in reality, the whole thing is nothing more than a mere video game.

The trading software isn’t actually connected to any real live markets & instead it’s all just a trick. The numbers are faked, the trades are faked – everything you’re told is basically a bunch of lies.

This means that unfortunately, you’ll only finally discover the whole thing is a scam when you finally push to make a withdrawal & realize that it never comes… But by then you could have deposited thousands.

Heck, some people have even lost tens of thousands to these types of scams.

And the broker won’t be interested in helping you retrieve any of your money because they’re in on the scam too. They’re unlicensed & they’re just setting out to take as much cash from you as they possibly can.

The whole thing should be avoided entirely, but just in case you’re still contemplating trying it out (which sadly I know some people will be)…

Firstly there’s the fact that The Bitcoin Capital website displays NO license whatsoever (which is a requirement for investment/trading related websites to own & display) & nor does it share any information as to who’s behind it.

In fact, the people behind The Bitcoin Capital have actually gone to an extreme effort to keep themselves anonymous. They’ve privately registered their domain name & put together a video using a spokesperson hired from Fiverr to promote it.

That’s a huge red-flag on its own…

Then there’s the fact that the people behind The Bitcoin Capital software have used fake testimonials to try to gain trust from their visitors. That’s not the action of a legitimate website.

And the reason I know that the testimonials are fake is because they’ve actually used the same photo of one guy twice for 2 different people (as shown below) and the images have been taken from a stock-photo website:

Then there’s the fact that the creator of The Bitcoin Capital software is affiliated with the broker that you’re recommended to deposit (which is a binary options broker) and this alone PROVES it’s a scam.

Why does it do that?

If you’re right, you get your money back plus a small bonus (paid to you out of the brokers own pocket) but if you’re wrong then you lose everything.

This means that it’s in the brokers’ interests for you to lose, because if you win then it costs them money since they would have to pay you your winnings out of their own money.

So knowing that, ask yourself this – why would a broker (who only makes money when you LOSE money) pay commissions to the creator of a piece of software which can supposedly guarantee you profits?

They wouldn’t – no way… The real reason they’re paying the creator of the software commissions for getting you to deposit is because they know that the software is actually designed to make you LOSE.

My Verdict – Is The Bitcoin Capital a Scam?

Yes, The Bitcoin Capital software is indeed a scam & I say that with 100% confidence. The software is purely designed to trick you into depositing with an unlicensed broker so that the people behind it can earn commissions at your expense.

And like I mentioned towards the beginning of this review I’ve actually already seen this scam several times before launched under various different names such as The News Spy & the Crypto Method.

The Bitcoin Capital software should be completely avoided because it will do nothing other than make you lose money & the broker that you’re told to deposit with is also in on the scam too so getting your money back will prove to be extremely difficult.

Instead, if you really want to make good money online legitimately I would suggest you stick with one of the proven methods from my top picks page here.

Plus if you’re interested you could also learn about the same method that I personally use to make most of my own money online which is something called affiliate marketing.

Affiliate marketing basically involves you promoting products or services online (such as products from Amazon) & getting paid commissions in return. Plus the amount you can earn with it is totally uncapped.

The harder you work, the more you stand to earn… And you can even get started with it for free over at Commission Academy.

But whatever you decide to do I just hope that my review of The Bitcoin Capital software here has given you a good insight into how it really works & most importantly I hope it has helped you to save your cash.

If you happen to have any further questions or comments though then, of course, don’t hesitate to leave them below & I’ll get back to you as soon as I can. 🙂