According to the British Bitcoin Winners website, something known as Staffa’s algorithm is allegedly making British people rich through Bitcoin & you’re told that you can become the next millionaire. 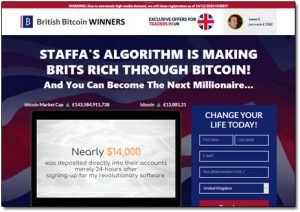 The website claims that Staffa’s algorithm can predict profitable Bitcoin trades with 99.4% accuracy & that by signing up for free, you can get access to it & begin earning money almost right after joining.

But is British Bitcoin Winners legit? Or is it just a scam that you should avoid?

Well, you can rest assured that you’ve come to the right place to find out as I’ve personally taken a look into it & in this honest British Bitcoin Winners review I’ll be uncovering the truth.

What Is British Bitcoin Winners?

British Bitcoin Winners is a newly launched website that promises to provide people with access to an automated trading system that can allegedly generate them guaranteed profits from Bitcoin.

The system is said to be based around something known as Staffa’s algorithm & you’re told that it can detect profitable trades with a 99.4% accuracy rate, which is insanely high.

So basically, in other words, you’re led to believe that you can generate unlimited amounts of cash, all on complete autopilot.

All you have to do, according to the creators of British Bitcoin Winners, is simply sign up, make a deposit with the recommended broker & then activate the system to begin making money.

From there you’re told you can expect to see minimum profits of £1,100+ per day.

And the British Bitcoin Winners website even claims to take their members on retreats around the world every single month… So at a glance, it almost sounds like a dream come true.

And that’s because British Bitcoin Winners IS a scam.

The reason I can say that so confidently is that it’s actually a scam I’ve seen (and exposed) several times before. The creators simply keep on changing its name in an attempt to trick more people into signing up.

Some of its previous names include Bitcoin Evolution, Bitcoin Revolution & Bitcoin Prime (among others).

And sadly, whilst its name may have changed, the scam remains exactly them same.

How Does British Bitcoin Winners Work?

The idea is that the team behind British Bitcoin Winners have put together a system that leverages something known as “Staffa’s algorithm” & can generate profitable Bitcoin trades on autopilot.

All you need to do (according to them) is simply sign up, make a deposit with the broker that they recommend to you & then activate the system in order to begin earning money.

But there are 2 very important things that they fail to mention.

2 things that when coupled together, literally prove that the entire thing is a scam.

So, the first thing that they fail to mention is the fact that they’re actually affiliated with the broker that they recommend to you.

This means that if you sign up & make a deposit with the broker, the people behind the British Bitcoin Winners will get paid a commission from the broker that you deposit with.

And the second thing, is that the broker you’re told to deposit with is not a normal broker. It’s a binary options broker.

Through a binary options broker you don’t “invest” in things. Instead, you simply place bets as to whether you think the value of something will rise or fall over a set period of time (usually under 60 seconds).

This means that when it comes to binary options trading, the binary broker wants you to do one thing & one thing only, which is to lose money. They don’t want you to win whatsoever.

If you win, they lose money.

So, knowing that, ask yourself this – why would a binary options broker that loses money when you win, be paying commissions to the creator of a system that could guarantee you to place winning trades?

The answer is simple. It’s because they know that the system doesn’t really work as promised.

They know that in actual fact, the same is completely fake. It’s not really connected to any live marketers & it’s been designed to simply trick you into making deposits with the recommended broker.

So, basically, the broker & the creator of British Bitcoin Winners are both in cahoots on the scam together.

This means that if you do make a deposit via the British Bitcoin Winners, you will simply lose your money. The system will not work as promised & then the broker will not let you withdraw your funds.

It’s all just a trap & an expensive one at that.

The first red flag with regards to the British Bitcoin Winners system is the most obvious one, the fact that it simply sounds way too good to be true.

As the saying goes, “if something sounds too good to be true – it probably is”.

In the instance of the British Bitcoin Winners system, it definitely is.

But alongside that, there are also various other red flags, such as the fact that the British Bitcoin Winners website states that the system has been featured in the news, which simply isn’t true.

The website claims that it’s featured on CNN, Bloomberg, CNBC & Forbes but none of those claims are true.

In fact, Forbes previously published an article warning about the dangers of binary options trading, so there’s no way that they would be recommending a binary options system.

Here’s a snippet from that article:

And then there’s also the fact that the so-called “real testimonials from real users” on the British Bitcoin Winners website are all fake too, which is proven by a simple Google search.

A quick search using Google’s Reverse Image Search tool revealed that the image shown for “Jennifer A” from Norwich who has supposedly earned £6,109.09 has simply been taken from a stock photo website.

The UK’s Financial Conduct Authority (FCA) have actually put out a warning against British Bitcoin Winners on their website & stated the following:

We believe this firm has been providing financial services or products in the UK without our authorisation. Find out why to be especially wary of dealing with this unauthorised firm and how to protect yourself from scammers.

On the FCA’s website the system is listed as British Bitcoin Profits (rather than British Bitcoin Winners) but as shown below, we can see that the domain name is the same for both sites: 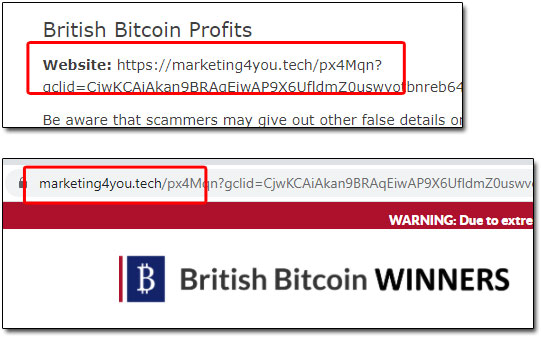 It simply seems as though the creators changed the name to try to escape the warning but forgot to change the domain name.

Is British Bitcoin Winners a Scam?

British Bitcoin Winners is definitely a scam, there’s no doubt about it. The whole thing has been setup with the sole intention of tricking you into signing up & depositing money via an unregulated binary options broker.

This means that any money you do deposit will be lost & so, as a result, I strongly recommend that you steer clear of the British Bitcoin Winners system.

Instead, if you are still looking for a way to earn money online I suggest you stick with one of the proven & legitimate methods that can be found on my top picks page.

And I’ll point out here that one of my all-time favorite methods is something known as affiliate marketing.

It basically involves you promoting products or services online in return for commissions & it’s actually the exact method that I personally use to generate my own income online.

So if you’d like to go check that out, you can access my free getting started guide right here.

But whatever you decide to do, I just hope that my honest review of British Bitcoin Winners here has given you a good insight into how it all really works & hopefully, it helped you to avoid it.