BTC Clicks is a Bitcoin PTC website & they claim they’ll pay you Bitcoins in return for you clicking on advertisements. On top of that, they also claim to pay you up to a whopping 80% in referral commissions too. 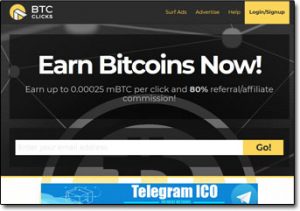 It all sounds super easy & you might think that this website will be your key to unlocking newfound Bitcoin wealth – but is it actually legit, or is BTC Clicks a scam that’ll just see you wasting your time?

I’ve done the digging & in this BTC Clicks review, I’m going to be uncovering everything you need to know about it, including whether or not you can really make good money with them & if they actually pay.

What Is BTC Clicks?

I briefly touched on it above, but BTC Clicks is what’s known as a PTC website – which stands for Pay-To-Click. These types of websites will pay you in return for clicking on advertisements that are shown on their website.

Pay-To-Click websites are a legit thing, however you have to be very careful when looking into them because there are also a lot of scams out there. I’ve actually exposed some of them here on this blog, such as 1DollarAdz & Two Dollar Click.

The usually giveaway of a PTC scam is when they promise they’ll pay you a lot of money for each click. Generally because clicking is such an easy task, legitimate PTC sites will pay you less than 1 cent per click.

It might not be a lot of money, but because the task itself is so easy some people are still attracted to these PTC websites. In my opinion I believe there are better ways to make money as PTC sites are only ever realistically going to provide you with mere pocket change.

Anyway, BTC Clicks itself is a PTC website – I can confirm it’s a legitimate one too, but instead of paying out in typical currency like USD this particular site actually pays out in the cryptocurrency Bitcoin.

There’s a lot of hype surrounding cryptocurrency at the moment & as a result a lot of people have been becoming very interested in Bitcoin PTC sites, but whilst paying out in BTC may seem like a good thing it can also be a bad thing too.

Let’s take a closer look at it…

How Does BTC Clicks Work?

The process at BTC Clicks is actually pretty simple. Advertisers buy advertising slots, then BTC Clicks allow you sign up & click on the ads, then in return they’ll pass a percentage of the money onto you (paid to you in BTC).

BTC Clicks keep a percentage for themselves of course – that’s how they’re making their money.

Regardless though you will still be able to earn up to 0.00025 mBTC per click. This works out to be around $0.002 in USD. As you can see it’s not a lot of money at all, but like I say clicking is such an easy task no company is never going to pay you a fortune to do this type of thing.

The other reason these sites don’t pay a great deal is because they don’t get a lot of revenue from the advertisers. You see unlike traditional advertising this type of advertising is provided to advertisers much cheaper – the reason for that is because the majority of people clicking the ads won’t actually be interested in what they see.

This means that the advertisers might get a lot of clicks, but in reality they are probably not going to get a lot of customers. The other thing is the fact that the majority of people using these types of sites don’t actually have a lot of money spare to spend, that’s why they’re using these sites in the first place… To try & make some money.

Again the advertisers are aware of this & that’s why it’s a much cheaper form of advertising.

Also it’s worth pointing out that BTC Clicks claim to pay up to 0.00025 mBTC per click, so this means this is their highest paying amount. You are not guaranteed to get that amount for every click, in fact for some clicks you may get much less.

The truth is you’re not going to make much money by clicking on advertisements through the BTC Clicks site. It will take you 5,000 clicks before you are even able to earn so much as a dollar, and you won’t be able to click this many times per day because they don’t have that many different adverts.

So overall through the PTC side of things you will be earning less than a dollar a day… Not too exciting.

But what is slightly more exciting is their referral program. Through this program you can earn up to 80% commissions from the people that you refer. So if you refer a friend & they start clicking on ads, you will earn 80% of whatever they make.

This would make your life easier because rather than having to sit clicking ads yourself you could just earn from others who are doing it, and you could refer more people to earn from multiple people too.

However what you have to appreciate here is that whilst the 80% commission seems a lot in reality it’s only 80% of a fraction of a cent, so overall you are still not really going to get rich through this opportunity.

Whilst as far as I’m concerned BTC Clicks affiliate referral program is the best option to make money with this site, in reality there are still better affiliate programs out there that you could join instead.

Is BTC Clicks a Scam?

BTC Clicks is definitely not a scam – it’s a legitimate PTC website that pays you in return for clicking on advertisements & there is plenty of payment proof available online to see that people have been cashing out.

However despite BTC Clicks being legit I am still not going to be recommending it because it’s not really very rewarding in return for your time. As far as I’m concerned there are many better opportunities available.

It would take you days of solid clicking with BTC Clicks before you would be even able to cash out a mere dollar, and also BTC as a cryptocurrency is just too volatile. I mean sure, sometimes this could work in your favour but other times the currency could drop & see you getting paid much less for your clicks.

So overall I’m going to arrive at the decision not to recommend this opportunity, despite it being legit. Hopefully you can see why & hopefully this review provided you with the insight into this program that you were looking for.

If you do happen to have any further questions or comments don’t hesitate to leave them below.