If you’ve come across the Two Dollar Click website then chances are it’s left you with quite a few questions, such as what is it? And is it actually legit or is it just a big scam? 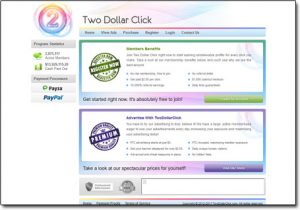 Well, thankfully you’ve landed in the right place because in this Two Dollar Click review I’m going to be uncovering everything you need to know about it so you can decide whether or not it’s something you should get involved with.

And here’s a little hint – yes, it is a scam. But keep reading because I’ll show you exactly how it works (or should I say doesn’t work) and I’ll show you what you’ll need to do if you’ve already signed up to prevent yourself getting scammed.

By the way, PTC stands for Pay-To-Click because that’s exactly what Two Dollar Click claims they will do. Don’t get me wrong there are some legitimate PTC sites but they are renowned for paying very little, and it’s hardly a surprise because ultimately you are literally just clicking your mouse… Who is going to pay big money for that?

Well, Two Dollar Click claims they are – they claim that they will pay you $2 for every single ad you click on but the truth is that’s just a totally unrealistic claim. Generally, these sites don’t even pay a cent per click, let alone anywhere near $2.

Combine that with the fact that Two Dollar Click has a massive minimum withdrawal limit of $1,000 & it’s easy to see that it’s a scam that’s been designed purely to make the creator wealthy at other peoples expense.

Firstly, to see how Two Dollar Click is scamming people it’s quite important to understand how a traditional PTC site works. They basically have panels of advertisers who pay them money to show their adverts to people…

Everybody is happy – the advertisers are getting advertising, you are making money & the PTC site is taking a slice of the pie for managing everything.

However, the advertisers are well aware that the chances are the people viewing/clicking their ads will NOT be interested in them. The only reason they are viewing them or clicking on them is to earn themselves some money, as a result, they are only willing to pay a very small amount for this type of advertising & they pay that in the hope that at least somebody who clicks will be interested.

(to be honest, this type of advertising is usually very poor & the advertisers normally end up losing money – but there are always plenty of advertisers waiting in line willing to at least try it out).

Anyway, for Two Dollar Click to be able to pay you $2 per click this would mean the advertisers they are working with would have to be paying over $2 for every single click & from my years of online marketing experience I can tell you this would never happen.

There is no way any advertiser would pay such a large amount for such rubbish clicks on their advertisements, ever. Not unless they were wanting to purposely run their business into the ground.

You see they could advertise on platforms like Facebook, YouTube & Google for much less & on these platforms, they could also target their advertisements so that the people they would be advertising to would actually be interested in the ads.

So how can Two Dollar Click afford to pay you $2 every time you click on an ad? Well, they can’t… It’s a scam!

They are merely tricking you into thinking you are earning that much money, but then when it comes to withdrawal time you will find out that your withdrawal request just gets ignored. That’s why there’s no Two Dollar Click payment proof to be found on the web… Because they don’t pay!

On top of that, that’s why their withdrawal limit is set at a whopping $1,000. Usually, with PTC sites the withdrawal limit is around $1, in fact, I’ve never ever seen a PTC site with a minimum withdrawal limit over $10… Two Dollar Click has set the limit so high so that they can get you to click on a huge amount of ads before you’re able to find out it’s a scam, and all the meanwhile the creator will have been making money at your expense.

You see the creator is still get paid (probably nowhere near $2 per ad), but ultimately if he (or she) can get enough people to click on the ads then he (or she) will still make a good chunk of change from this scam.

Hopefully, you haven’t, but if you’ve already signed up don’t worry all is not lost. The initial service is free (despite you then being pushed to upgrade into their paid packages) so you shouldn’t have lost any money.

The problem you will face though is that Two Dollar Click will likely have your contact details & you’ll find that they’ll try & then push you into other scams, scams that could see you parting with lots of money.

For that reason, it’s a good idea to ignore any of the emails that they might send you – you shouldn’t even open them, just delete them right away. Also, be wary that they may sell your details onto other people so the senders may not be Two Dollar Click. Only open mail from people you know & trust, or companies that you recognize & trust.

Sadly if they have sold your details there is nothing you can do, once your data is out there it’s out there, but not opening the mails will help – generally, the scammers will watch to see who is opening them & if you aren’t they might delete you from their lists (with a little bit of luck).

This website is a total scam, and immediately upon landing on the site I could tell that it was just a rehashed version of a previous scam I had seen before, Three Dollar Click. There is probably more kicking around too so watch out, such as One Dollar Click or Four Dollar Click… I did see a similar scam named 1 Dollar Tasks & it’s possible that that’s associated with this one too as it sounds/looks similar & works in a similar way.

Anyway, my advice to you would be to just completely avoid Two Dollar Click. I know it sounds awesome & you might be totally hyped up about the possibility of earning $2 just by clicking on ads (who wouldn’t be) but sadly it’s completely fake & it will just see you wasting your time. When it comes to withdrawing your money you’ll just discover that it’s been a total scam & all the clicking you have done will have just been to make somebody else rich…

If that wasn’t bad enough they also try & push you into purchasing paid packages through the site & by doing this they claim you can earn even more. This is a total joke because the site is totally fake & these extra packages will just see you losing even more money – some of the packages even cost up to $999!

So the bottom line is you should keep a hold of your cash & don’t bother wasting your time with this thing. The creator has just put it together to take advantage of people who are new to making money online, but if you are new then you can simply check out my free getting started guide here instead. That will show you legitimate ways to make money online, and it will also explain how much you can make by doing different things.