Have you recently come across the Cash In On That Passion website? It’s just launched & it promises to provide a way for its members to start earning real money quickly simply by working from the comfort of their own home. 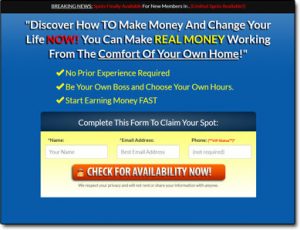 You’re told that you don’t need experience & that you can have full control of your working hours – but is it actually legit or will Cash In On That Passion scam you & leave you with less money than you started out with?

Thankfully you’ve landed in the right place to find out because I’ve taken a closer look into it all & in this review, I’m going to be uncovering everything there is that you need to know, including how it all really works.

What Is Cash In On That Passion?

Cash In On That Passion is a website that claims to help you do exactly that – you’re told that you can simply pick something that you’re passionate about & learn how to make lot’s of money with it online.

I’ll be honest here & say that there are some legitimate programs out there such as Commission Academy for example that will indeed help you learn how you can make money with something that you’re passionate about.

BUT… the problem with this Cash In On That Passion system, in particular, is that it makes some extremely bold promises.

For example, you’re led to believe that you can start earning lot’s of money right away, even if you have absolutely no experience, and that the amount of money you’ll be able to earn will totally change your life.

Basically what I’m trying it say is that it all sounds a little too good to be true.

And sadly that’s because it is…

After taking a closer look into the program I was able to find out that the Cash In On That Passion system isn’t actually a system at all, and it won’t help you make money as it claims. It’s actually just a sales page that’s been put together to trick you into buying into an entirely different business opportunity named MOBE.

How Does Cash In On That Passion Work?

Okay, so the truth is that as I mentioned above the Cash In On That Passion system isn’t actually a system at all, it’s just a sales page that’s been designed to get you to buy into an entirely different (and very expensive) business opportunity named MOBE.

So firstly I’ll backtrack & explain briefly what MOBE is, then I’ll show you how it all pieces together…

Basically MOBE is what’s known in the online marketing world as a high-ticket network marketing company which in short basically means they sell expensive products & they give people the opportunity to earn money by recruiting other people into the company.

Now their product line all focuses around making money & building businesses online – you’re led to believe that you can go through the program, purchase the products & that the training you get will help you build a successful business online.

I’ll admit that yes, some of their training does contain fairly decent information – but the majority of it (in my opinion at least) is overpriced, and the main goal of it is to push you into promoting the MOBE system itself.

So basically it’s a case of signing up to MOBE, purchasing the products to learn how to make money, then realizing that the way you actually make money is by getting other people to sign up to MOBE just like you did.

Anyway, let me point out that these products cost up to around $50k in total & you can only make money through MOBE by reselling them if you’ve actually bought them yourself first… So it’s safe to say that MOBE is an opportunity that requires a LOT of investment.

That means there’s a lot of risks involved which is the reason why I didn’t recommend it in my review. The truth is, as shown in their income disclaimer, most people who join MOBE never even make their investment back… Let alone make profits.

Now, where does Cash In On That Passion come into it?

Well like I say, the main way people are making money through MOBE is actually by getting other people to buy into MOBE… So people sign up to it, buy the products then do whatever they can to recruit others.

Some of the gurus in there go the extra step & they create their own websites in the hope that they’ll be able to convince (or in the case of Cash In On That Passion trick) more people into signing up.

So yeah, Cash In On That Passion is just a website that’s been created by an affiliate of MOBE in the hope that it’s creator can get you to hand over your cash so that they can earn money at your expense.

It’s not the first website of its kind I’ve seen either – I’ve actually seen several others such as My 7 Figure Nest Egg, the Ultimate Dot Com Lifestyle & so on…

They’re all different sales pages saying different things but they all have the same goal – which is to get you to buy into MOBE.

Is Cash In On That Passion a Scam?

Well, I’ll point out firstly that MOBE, the opportunity it sells you into isn’t technically a scam since whilst it’s very risky, there is actually the potential for you to make money with it if you work really hard…

However with that being said the Cash In On That Passion system sells you into it on a complete pack of lies & makes it all seem much easier than it actually. They also forget to mention anything about the huge $50k investment you’ll have to make if you want to get the full potential out of the program…

So yes, my verdict based on that is that the Cash In On That Passion website itself is a scam. It’s clearly been designed just to trick you into signing up to MOBE so that it’s creator can make money at your expense.

There are many legitimate ways to make money online but frankly as far as I’m concerned the Cash In On That Passion website is not one of them. The whole thing is nothing but a ploy.

Therefore overall as you can imagine I am not going to be recommending this to you, but hopefully, my review gave you the insight into it that you were looking for. If you do happen to have any further questions or comments don’t hesitate to leave them below.