The Commission Multiplier system promises to provide you with access to a so-called “strange method” for getting paid easy money 3x per week from the comfort of your very own home… Even if you’re brand new to working online. 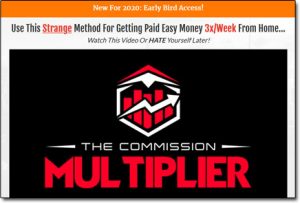 You’ve probably noticed already though that the video promoting the system doesn’t really do any explaining about how it actually works.

But paying money to access an “easy way to make money” is always a red-flag, so what’s the truth?

Is the Commission Multiplier system legit or is it just a new scam that you steer clear of?

Well, I’m really glad that you came here first before joining because in this Commission Multiplier review you’re about to see that it’s certainly not as clear-cut as it seems.

What Exactly Is The Commission Multiplier?

The Commission Multiplier is a brand new online money-making system & ultimately portrays the idea that it’ll provide you with the opportunity to make lots of easy money from home without really having to do anything.

Here’s a screenshot of the current headline of the website to highlight that point:

The video promoting it which I’m sure you’ll have already seen starts out with so-called “members” of the system boasting about how much money they’ve been able to make thanks to the Commission Multiplier system, and then it goes on to state that you’ll be able to do the same.

But what it doesn’t do is explain how any of it actually works… Instead, you’re just pushed towards handing over some of your own cash first in order to “find out more” and get started earning money.

Only that’s a bit of a problem because handing over money to make money is something that’s commonly associated with a get-rich-quick scam.

After all, if the Commission Multiplier really worked as promised & could make you so much money so easily then why on earth should you have to pay some of your money to get access to it?

Doesn’t quite add up, does it?

And that’s because the Commission Multiplier system isn’t really what it seems… It’s actually just a doorway page for something called The Super Affiliate Network which is a program I recently reviewed (and chose not to recommend).

This means that if you hand money over to buy the Commission Multiplier then you’ll find out that what you’ve actually bought into is The Super Affiliate Network… It’s basically a trick to get you to buy into it.

How Does The Commission Multiplier Work?

And in short, The Super Affiliate Network is an expensive training program which is supposed to teach you how to start your own profitable affiliate marketing business… But there are some major problems with it in my opinion.

The first problem I have is that The Super Affiliate Network requires you to spend thousands of dollars to access the full program. In my opinion that is just WAY too expensive for what you get in return.

Other programs like Commission Academy will let you get started for free.

So you’ll basically be signing up to The Super Affiliate Network, spending thousands of dollars & then finding out that the way you make money with it is by promoting it to others & trying to get them to do the same.

This means that if something happens to The Super Affiliate Network, your business (and income) will disappear overnight… And that’s not unlikely to happen because these types of “recruiting schemes” are being heavily clamped down on by the FTC.

Not so long ago both MOBE & Digital Altitude (two extremely similar programs to The Super Affiliate Network) were forced to close & almost all of the participants were parted from their cash.

It’s too risky in my opinion – and it also comes very near to potentially bordering on being a pyramid scheme.

The third problem I have with it is that the training provided is more “hype” than anything else. It seems that rather than being truly set out to “train” you, the training is just more geared towards getting you to spend more money.

I mean sure, they do give you some training which may be insightful if you’re new to the world of affiliate marketing – but in my opinion, you can get MUCH better training elsewhere for much less money.

I’m going to mention Commission Academy again here because I truly believe that you’d get WAY more value if you were to join that program instead (and stand a much better chance of seeing success).

Less Than 2% of The Members Make Money!

Yep, that’s right – I was able to the find the income disclosure statement & it revealed that literally less than 2% of the people that sign up to The Commission Multiplier system actually go on to make any money.

Take a look at the income disclosure chart yourself below:

At a glance it might not seem overly bad – after all, even the rookies seem to be making at least $103 per year right?

Well not quite… Because one thing that table hasn’t factored is in the costs involved.

Here is a quote from the Commission Multiplier income disclosure page which highlights the true situation a bit better:

The average partner spends between $3000 and $12,000 in expenses per year as they build their business. Less than 2% earns sufficient commissions to cover their costs of the Commission Multiplier products.

Basically in other words that means around 98% of the people that join the Commission Multiplier system actually just go on to spend between $3,000 and $12,000 and don’t make enough back to cover those costs.

That’s CRAZY… And I think that probably speaks volumes about this program on its own.

Well yes, as you can see from the income disclosure table shown in the previous section of this review it is indeed technically “possible” to make money with the Commission Multiplier system… But it’s very unlikely.

You see like I also mentioned previously, the training inside of the Commission Multiplier system isn’t the best training in the world (in my opinion) and I believe it’s primarily geared towards simply getting you to spend more money as opposed to actually helping you get started.

So, all in all, I believe that the only people making the “good money” with the Commission Multiplier program are those that already have prior marketing experience – and they’re making their money at the expense of the newbies that they’re referring into it.

Plus again it all comes down to the whole recruiting thing as that’s how people are making money with The Super Affiliate Network – they’re doing it by just promoting the exact same thing to others & getting them to spend money.

Not the best business model in my opinion, which brings me onto…

My Verdict – Is The Commission Multiplier a Scam?

However, in my opinion, going off the income disclosure table that I showed to you a little bit above in this review it’s quite evident that you’re going to be much more likely to just spend money than you will be to actually make it.

And so with that in mind, it’s also quite clear that they’re being extremely misleading in their claims on the Commission Multiplier website (because they make it seem like it’ll be really easy)… So, in my opinion, it’s a scam.

I wouldn’t advise you join the Commission Multiplier program…

Instead, if you truly want to make good money from affiliate marketing then I would suggest you just stick with a legitimate, proven & well-known platform like Commission Academy as it’s there that you’ll stand a much greater chance of success.

Or alternatively, you could check out these other ways to make money online as well.

But whatever you decide to do I just hope that my honest review of the Commission Multiplier system here has given you a good insight into how it really works & what your real chances of earning with it are.