The Converted Stream website allegedly provides you with an easy way to make lot’s of money online. You’re led to believe that all you need to do is sign up & start clicking to begin earning money. 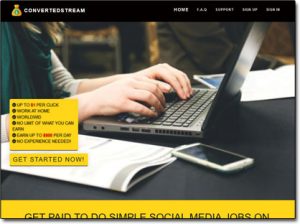 But is it actually legit or is Converted Stream a scam that’s just going to part you from your cash?

Thankfully you’ve landed in exactly the right place to find out because I’ve taken a closer look at it & in this review, I’m going to be uncovering everything you need to know, including how it all works & whether or not you can really make money with it.

What Is Converted Stream?

Converted Stream poses as a legitimate GPT (Get-Paid-To) website & it claims that you can earn as much as $500 per day just by clicking your mouse. It almost sounds like a dream come true…

You’re led to believe that you don’t need any experience to get started, that you can do it from anywhere in the world & that you can get paid just for doing simple tasks on social media sites like Facebook & YouTube.

Sadly though as you probably suspect in reality things aren’t quite as good as they seem.

You see whilst there are indeed actually some legitimate GPT sites out there, typically they pay very little since the tasks are so simple. Most GPT sites won’t see you earning much more than $5 per month… So when Converted Stream boasted income claims of $500 per day it immediately made me very suspicious.

After all why would the company pay as much as $1 for clicks when there’s so many people out there who’d click for much less money? Heck I’d click my mouse for $0.10 a time if it was legit.

But as I say it’s not legit, Converted Stream is actually a scam & it’s a very dangerous scam at that – you’ll soon see why.

So if you haven’t done so already – DON’T sign up to Converted Stream… And if you have, then you definitely need to keep reading because I’m going to show you how to protect yourself from getting scammed.

How Does Converted Stream Work?

Converted Stream claims to provide you with a super-easy way to make money. They say that all you need to do is sign up, share your unique link & that you’ll be paid for each new member you get to sign up.

On top of that, you can also qualify for $5 bonuses by signing up their “offers”…

If you’re new to this sort of thing then initially it might seem legit – but it’s far from it. Converted Stream is not paying anybody, instead, they’re just trying to get as many people to sign up as they can so that they can steal their details & push scams on them.

That’s why they have an incredibly high withdrawal limit – normally legitimate GPT websites have a withdrawal limit of just $5 or $10, whereas Converted Stream requires you to earn a whopping $100 before you can withdraw.

The reason they do this is so that you’re forced to bring multiple people into the scam first – then once you finally hit the limit you’ll find that your payment withdrawal request just goes completely ignored.

How do I know so much about it? Simple, I’ve seen this scam several times before under different names. Just recently it was launched under the name My PC Job and now here it is again, this time called Converted Stream… The creators just keep trying to escape the negative reviews.

Basically, when you sign up to Converted Stream the creators are hoping that you use the same details you use elsewhere. You see many people use the same username/password combinations for several websites.

Once you enter your details into Converted Stream the people behind it get a notification & they’ll try logging into any accounts associated with your details using the username & password that you signed up to their website with. Therefore if you do happen to use the same username & password combination on any other websites I’d highly recommend going ahead & changing them ASAP.

But the scam doesn’t end there – oh no because they then try tricking you into introducing other people into the scam too.

Once you’re inside you get given a unique referral link & you’re told that you’ll be paid every time you get somebody new to click on it. Basically they just want you to get more people to sign up so that they can steal their details too.

The reason many people get caught out is because they think they’re actually earning money. When people click on the link you’re given it does actually increase your account balance inside of Converted Stream, but the problem is they’ll never let you withdraw anything… It’s all fake.

As if the scam they’re running wasn’t already bad enough, they then try & push even more scams on you inside of the program. From the members’ area, you’re provided with a link that says “Make More Money”, except when you click it you’re just taken to a page full of scams…

For example as shown above they recommend an opportunity on that page called Paid Social Media Jobs & that’s a website I’ve already previously exposed on this blog – it’s bad news & if you sign up to it you’ll lose money.

Is Converted Stream a Scam?

Yes there’s absolutely no doubt about it, Converted Stream is a scam & it’s been purely put together to make the creators rich at your expense. You will NOT make any money with the Converted Stream website, it’s a fake.

Like I say I’ve seen this exact same scam several times before under various different names. The likelihood is that Converted Stream will run for a couple of weeks & that it will then be closed & will reappear under a different name once again.

There’s a good old saying that “if it sound too good to be true it probably is” & that definitely applies here. There is simply no way you would be able to instantly make $500 per day as easily as the Converted Stream website claims.

The internet provides you with several great ways to earn money but it’s not magical & it’s not going to see you earning lot’s of money with little work. If it could do that then everybody would be doing it…

Anyway hopefully my review helped you dodge this system & keep hold of your cash. If you’re interested in learning about the best legitimate ways to earn extra income from home then check out my list here.

Also if you happen to have any extra comments or questions don’t hesitate to leave them below.